TV Reviews
EXPERT REVIEWS, OP-EDS, AND RECAPS FOR
THE LATEST MUST-SEE TV IN A LIVING ROOM NEAR YOU 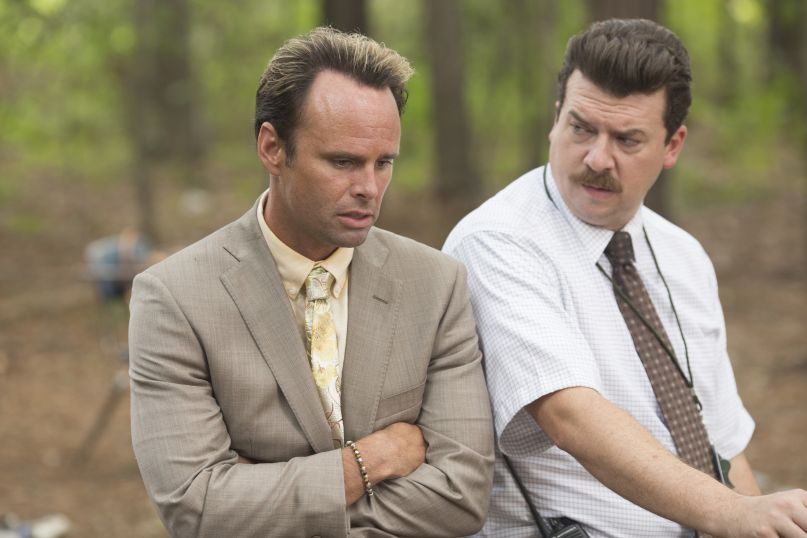 Note: the following review covers the first seven out of nine episodes of Vice Principals’ second season, which began last night on HBO.

“Everybody here knows I am a very compassionate man!” At one point in the second season of Vice Principals, Lee Russell (Walton Goggins) finds himself pushed to the point of loudly declaring this before a room full of his colleagues and family. Yet even in a packed room, Lee only has one true and real friend: Neal Gamby (Danny McBride), his co-vice principal at North Jackson High School. What made Vice Principals’ first season so compelling was the development of that friendship, and the ways in which co-creator Jody Hill (along with McBride) used them as two different case studies in sad, though frequently hilarious, masculinity. Where Neal is a man with a deeply flawed but at least existent moral compass, Lee has to announce himself as a good man to the world, thereby demanding validation. He’ll never be able to tell himself otherwise if it’s not affirmed for him by other people. Especially when, by most objective standards, he isn’t.

The two vice principals’ desperate need for any kind of validation is only sustained by the show’s almost entirely successful second season, already the back half of the series. Pitching it to HBO as a two-season run with a finite end date from the start has proven crucial to the show’s success. The grim nihilism of so much of Hill and McBride’s humor would grow interminable at the length of a standard series, but as a short-form piece of storytelling, Vice Principals has been able to establish its dual protagonists as flawed (at best) and irredeemable (at worst) without the necessity of keeping them pliable over a long-term network run. These are deeply broken men, occasionally funny but far more often pathetic, and in the show’s hands they don’t need to be any more or any less. This is just who they are.

That having been said, season two does what it can to complicate those definitions, even if most of those complications arise from the ways they ruin other lives, rather than their own. In “Tiger Town”, the show’s first episode back, Neal has to deal with all of the changes he’s been forced into, ever since a masked assailant shot him twice at point-blank range in the high school parking lot. Now, Neal lives with his ex-wife Gale (Busy Phillips) and her eternally patient husband Ray (Shea Whigham, as hysterically passive as ever), obsesses over who his shooter might have been, and rides a stair cart that Gale continuously reminds him he doesn’t need. Yet it’s not until Lee physically dumps Neal out of his self-imposed wheelchair that the onetime Vice Principal Gamby realizes his true calling anew. He returns to North Jackson, declaring that “the time of lawlessness is over,” and sets out to learn who shot him, with Lee at his side.

While the absence of Kimberly Hebert Gregory as Dr. Belinda Brown is definitely felt in “Tiger Town” and in the second season in general (she’s mostly MIA outside of a perfect one-scene appearance in the first episode), Vice Principals was never established as her story. It’s the story of Neal and Lee trying to claw their way up different ladders; Neal craves acceptance by his peers even as he pretends to revile it, and Lee simply wants more. But as the second season teases out the roots of their anguish, even the “Who shot Gamby?” gimmick on which HBO has been selling the show’s return begins to fall by the wayside in favor of McBride and Goggins’ separate-yet-compatible personal struggles, as their dreams and desperate cravings continue to slip through each of their hands. For as well as Vice Principals will work as broadcast on a week-by-week basis, this is a season of TV that will play exceedingly well in binge form, at least for those who can stomach its endless gauntlet of secondhand embarrassments and cringe-inducing gags. It’s the sort of comedy that only appreciates based on its smaller character moments.

While Lee and Neal’s savage treatment of Belinda led both to some of season one’s biggest laughs and its biggest issues, the second season refocuses itself on its dual protagonists, watching as they wander through their increasingly embattled lives in search of meaning. By entrenching its comic potential within McBride and Goggins’ comic interplay, the season is already a funnier and dramatically richer affair than its predecessor. As Lee stammers his way through the sudden loss of his teachers’ respect (despite the utterly incredible, Kim Jong Il-esque portrait in his office), and Neal attempts to rediscover his purpose in the wake of being shot, the vulgar bluster that both actors wring for all it’s worth is at once funny and poignant. Even some of the show’s lowest-brow moments (one episode sees another portrait of Lee defecated upon out of spite) pop when there’s such a strong sense of character behind them.

David Gordon Green directed all seven of the episodes currently made available to critics, with one more under his watch and one under McBride yet to come, and the filmmaker’s observant sensibilities make for some of the season’s biggest laughs. From a holographic monogrammed tribute to Gamby and on through an utterly disastrous birthday party at Lee’s house, Green finds comedy in the strangest imaginable margins throughout, hitting punchlines from so many absurdist angles that his near-flawless tonal shifts into uncomfortable drama are all the more affecting. This is a far more melancholic show than the one as which it started out, but every episode offers at least a handful of belly laughs, even if some of them trade on Hill’s trademark penchant for the comedy of brazen social discomfort to lesser effect. (It’s a totally logical step for Gamby that his first suspicions would fall on virtually every black student in school, but in a show that wants to complicate his morality, these gags mostly land as offshoots of the more uneven first season.)

Goggins and McBride are saddled with much of the heavy lifting, both comically and dramatically, and each actor brings depth to their reproachable men. Goggins turns up the innate creepiness of Lee’s relentless social aspirations to a brutal degree, verging on a comic approximation of Jake Gyllenhaal’s dead-eyed work in Nightcrawler as a man who knows nothing as a goal but more, whatever he should decide that means to him next. And even as Neal continues to bloviate and pretend to a kind of authoritative status that he doesn’t seem to have in him, McBride shades his blowhard with a loneliness hinted at in the first season. His daughter is getting older, his wife has moved on, and he was gunned down at the height of his self-perceived glories; it’s no wonder that he quietly broke up with Ms. Snodgrass (Georgia King) while he was hospitalized. These are performances that could have stopped at “funny,” but wind up digging far deeper.

Not all of the show’s gags land, but even the lesser detours still yield some potent laughs. Ms. Snodgrass’ relationship with a smug college professor takes an overly lengthy route to where the characters inevitably end up but yields some sharp digs at bookish elitism in its many forms. Gamby’s endless barrage of crass insults at anybody he sees “beneath” him feel increasingly out of place given where Hill and McBride and Green are steering the characters, but even as these moments start to feel increasingly more like hard-R outtakes from The Office, McBride still has a command of immaculately delivered profanity that stands as virtually unrivaled in Hollywood today.

While Hill’s fascination with the habits and rituals of impotent men has informed all of his work going back to The Foot Fist Way, the second season of Vice Principals might offer his most trenchant commentary to date. When either Lee or Neal react to being bested, it’s usually in the most childish way possible. When they seem to learn lessons, Lee quickly reverts back to the slimy double-timing that comes far more naturally and Neal buries more new information beneath his protective layers of hard-nosed, petulant disrespect. But what’s perhaps most telling, and most of-the-moment, about the season is how it digs into the ways in which power-hungry men seize it. Like a dog with its first bird stuck in its teeth, so often they haplessly respond with panic, out of their depth as soon as they sink to the lows they think they must. There’s a lot of wincing comedy to be found in Vice Principals this season, but perhaps none of it more so than the simple truth that Neal Gamby and Lee Marshall will never be the men who deserve the things they think themselves entitled to. And that they’ll never stop chasing the impossible anyway.

Previous Story
At the Drive-In and Death From Above to tour together in Europe
Next Story
Morrissey’s first-ever tweet: “Spent the day in bed…”
Popular
More Stories
[fu-upload-form form_layout="media" title="Submit Your Photo"][input type="hidden" name="ugc" value="1"][/fu-upload-form]