March of the Juggalos goes down in Washington, DC 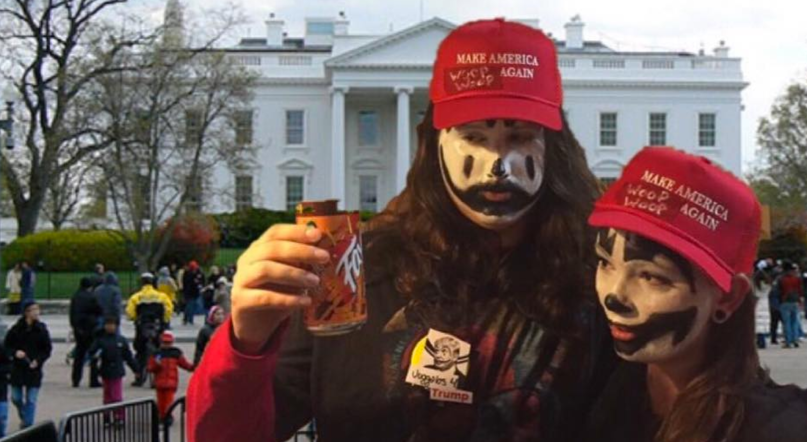 Today, Insane Clown Posse fans, affectionally known as “Juggalos,” descended on Washington, DC to protest the FBI’s decision to classify them as a gang.

According to reports from the ground, several hundred people turned out for the march, which also included speeches from Juggalos who were personally persecuted as a result of their affiliation. The members of Insane Clown Posse were also in attendance and were scheduled to speak and perform during the course of the march. Check out photos below.

Caregiver Amanda Price and machine shop worker Donald Brown, in from Youngstown. They say Juggalos are a family of outcasts, not a gang. pic.twitter.com/yK3kIxM3B7

Members of the Democratic Socialists of America (DSA) also attended the march and showed their support by offering cold Faygo and snacks to the Juggalos.

The Democratic Socialists of America are here handing out Juggalo-friendly snacks pic.twitter.com/h2kap5gkuB

Iraq vet Travis King: "The government that I helped to fund and support is calling me a gang member because of a genre of music we love." pic.twitter.com/wugZmyf5DD

A New Mexico woman gives a speech claiming she lost custody of her kids because she went to an Insane Clown Posse concert.

Jessica Bonometti, fired as a Virginia probation officer for being a Jugalette: "If horrorcore's so scary, why isn't Stephen King in jail?"

We have now moved on to the musical performances. Weed smoke and sprayed Faygo fill the air.

Can't get over how good this sign is pic.twitter.com/OSrWSj3clw

"Hi mom!" The Juggalos are all about family. "Whoop whoop!" pic.twitter.com/zPuscehnYq

This guy w the Juggalo stomach tattoo is my fave pic.twitter.com/PCtmYW1skQ

Speaker at the Juggalo March unpacks how gang designation creates a lifetime of criminalization for innocent people. pic.twitter.com/zN6ciwRZHk

Farris the "Juggalawyer" explains the effect of the gang designation, and recaps the status of their current legal battle. pic.twitter.com/Cf2jtuaA4p

Clowns are gathering, Faygo is passed around, chants of "Family! Family!" fill the air as tourists look on. Juggalo March time. pic.twitter.com/5gfamsvSVV

Alright, the Juggalos have already won the Battle of the DC Rallies #JuggaloMarch pic.twitter.com/9KGk1JeVbS

Following a group of juggalos to the march for #JuggaloMarch pic.twitter.com/UP5FiVKWao

Hundreds of ICP fans and their supporters are starting to gather outside the Lincoln Memorial in DC for the Juggalos March on Washington pic.twitter.com/rLgtwoOMc5

In 2011, the FBI formally classified the Juggalos as a “loosely organized hybrid gang,” alleging its members of engaging in criminal activity and violence. In 2014, ICP filed a federal lawsuit against the US Department of Justice in hopes of overturning designation, arguing that it was an “unconstitutionally vague designation” that doesn’t meet the criteria for reasonable suspicion. Earlier this summer, a judge dismissed the lawsuit, compelling ICP to organize this weekend’s march.

“To be sure, this is NOT a party, Gathering of the Juggalos, or a frivolous social event,” the group said of the march. “This march is a serious, peaceful public demonstration, organized for one purpose — to deliver a message to the world showing how Juggalos have been unfairly stigmatized and discriminated against simply for identifying as being part of a particular music-based subculture. The golden rule of the march for participants is simply this: If you’re not serious about being there, just stay home.”

Incidentally, a separate march in support of President Trump also took place in Washington, DC on Sunday, but was said to be much smaller than the Juggalos’ march.

Trump rally on the Mall includes members of the American Guard — a group dubbed "hardcore white supremacists" by the ADL #moar pic.twitter.com/vcFJGF6d1W

THE MOTHER OF ALL RALLIES IN WASHINGTON DC! ???????? #MOAR pic.twitter.com/FlcFlXqTIc

Neither march, however, was big as the Latin American parade that also took place in DC on Saturday. As they say, womp womp…

In DC today we have #juggalos, #MOAR, but the Latin American parade has the most people. pic.twitter.com/A1lPif2orS