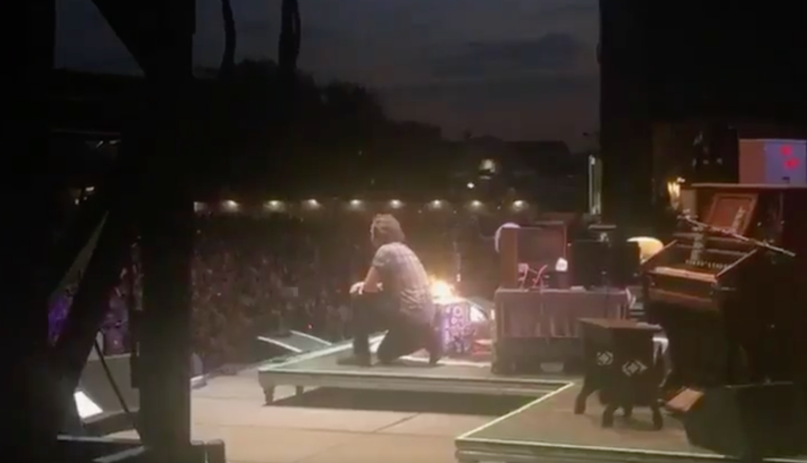 Professionals athletes weren’t the only ones who took a knee this weekend in protest of Donald Trump and the race-baiting ideology that he has enflamed since coming into office earlier this year: On Saturday, Stevie Wonder took two knees “for America” during his appearance at New York’s Global Citizen Festival. On Sunday, Pearl Jam frontman Eddie Vedder followed suit, as he knelt to the ground to open his performance at the Pilgrimage Music Festival in Tennessee. Pearl Jam’s official Twitter account shared video of Vedder’s action:

Meanwhile, across the country Vedder’s Pearl Jam bandmate Mike McCready performed a blistering guitar rendition of the Star-Spangled Banner prior to the Seattle Seahawks game against the Tennessee Titans. The back of McCready’s guitar bore the number “72” in reference to the Seahawks star linebacker Michael Bennett, who claims he was the victim of police violence while in Las Vegas last month. In a tweet, Pearl Jam wrote, “We support [Michael Bennett], [Colin Kaepernick], and everyone’s constitutional right to stand up, sit down, or #takeaknee for equality.”

We support @mosesbread72, @Kaepernick7, and everyone's constitutional right to stand up, sit down or #takeaknee for equality. pic.twitter.com/WDUD216pk2

Several other musicians also showed their solidarity by taking a knee on stage this weekend, including Roger Waters, Prophets of Rage, Pharrell Williams.