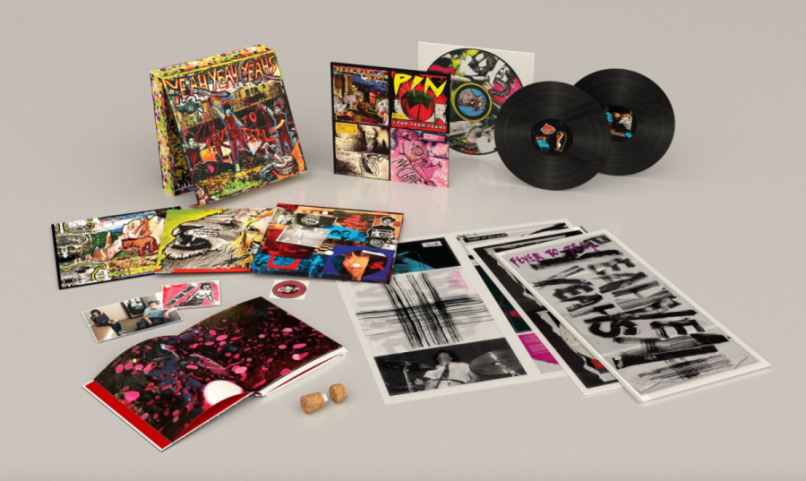 Yesterday saw Yeah Yeah Yeahs unearth a long lost demo called “Phone Jam” dating back to the recording of their 2003 debut album, Fever to Tell. Many assumed this signaled the impending re-release of their landmark record, and that has today been proven true: the New York indie outfit has announced a deluxe vinyl reissue of Fever to Tell set for October 20th via Interscope/UMe.

Limited to just 2,000 copies worldwide, the box set will feature a fresh remaster of Fever to Tell by Stephen Marcussen, pressed for the first time on 180-gram audiophile black vinyl. A second LP will contain nine previously unreleased four track demos plus eight B-sides and rarities, two of which have never before been heard. YYYs have released one of those unheard tracks, “Shake It”, to coincide with the announcement. Check it out below.

Numbered, signed, and wrapped in fishnet stockings (!), the box set will also include five newspaper lyric posters with photos from Nick Zinner, Spike Jonze, Lance Bangs, Julian Gross, Patrick Daughters, and Cintamani Calise; a 164-page hardbound photo book with Zinner’s personal photos as well as 16 pages from Karen O’s personal notebook; and one of 10 photo cards hand selected from Zinner’s personal collection and signed by the band. There’s also a champagne cork USB stick featuring all the audio plus over 90 minutes of video comprising 26 minutes of unseen behind-the-scenes video from the band’s 2003 UK tour, live performances, music videos, and two fan films. What’s more, the first 500 orders of the box will include four more unreleased demos on a bonus cassette tape with handwritten labels by the band.

In a statement, the band said,

“A friend of a friend kept asking if we were ever gonna put Fever to Tell out on vinyl as it hasn’t been on vinyl in 10 years. That’s not right. So here it is on vinyl for the first time in 10 years plus a time capsule of photos, demos (1st ever recorded,) a mini film documenting our near downfall and other fun memorabilia, from the turn of the century NYC, made with love + the usual blood, sweat + tears of Yeah Yeah Yeahs.”

To celebrate the release, the band has added more live dates, their first in public in four years. Already scheduled for the Growlers Six and Sound On Sound music festivals, Yeah Yeah Yeahs will also perform at LA’s Fonda Theatre on October 25th and Brooklyn’s Kings Theatre on November 7th.

Pre-orders for the Fever to Tell deluxe box set are going on here, and you can find all the album info below.