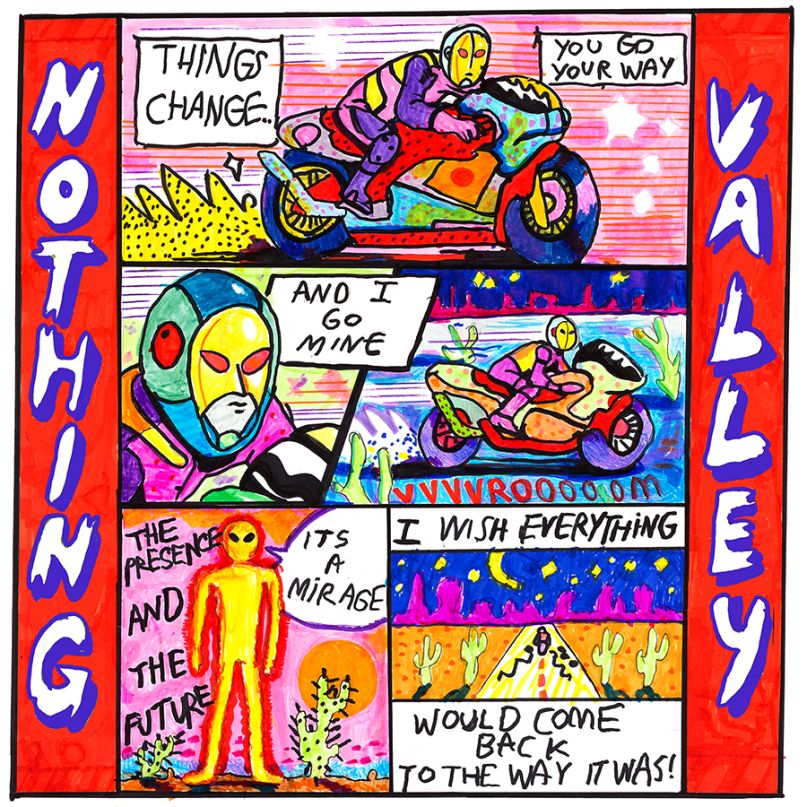 There’s something desperate about the Midwestern summer, a certain revved-up edge to any nice day that’s brought about by memories of the miserable just passed and almost returning. That impatient pursuit of fun takes a musical form on Nothing Valley, the debut album from Chicago’s Melkbelly and inaugural release for Wax Nine Records, the Carpark subsidiary run by Speedy Ortiz’s Sadie Dupuis.

The Breeders are the obvious point of comparison here, and not only because singer Miranda Winters has the vocal chops befitting a lost Deal sister. The first half of Nothing Valley propels itself along like a drunken bottle rocket on the strength of songs that could’ve made the starting lineup of ‘90s guitar rock classics like Last Splash. Opener “Off the Lot” warps the Los Angeles sun to fit inside a tour van’s cassette deck, marrying the warm-weather vibes of an inspirational West Coast tour with Old-Style-fueled rage of the band’s hometown. That fusion continues on “Kid Kreative” and “Twin Lookin Motherfucker”, which slice up thick slabs of buzz bin-approved rock that could’ve spawned a radio hit for Veruca Salt 20 years ago.

It’s not all Lollapalooza ’93 over here, though. Years in the heart of Chicago’s DIY scene (as both venue organizers and musicians) gave the members of Melkbelly (which also include Winters’ husband, Bart, brother-in-law Liam, and friend James Wetzel) plenty of opportunity to hone their hard, weird edges with the rest of the city’s deep bench of noise rock bands. Tracks like “R.O.R.O.B.” and “R2PCM” find the band stretching past verse-chorus-verse in search of better freak-outs, with the former expanding a Goo-era Sonic Youth jam into a slow-mo metal sludgefest and the latter pulling the ripcord on drummer Wetzel and getting out of the way.

Wetzel met the rest of his bandmates during a chance encounter at a secret Lightning Bolt show, which feels wholly appropriate; his piston-powered mastery of the kit marries the punishing assault of Brian Chippendale with the rhythmic knack of The Dismemberment Plan’s Joe Easley. It’s a highlight and one that adds a touch of extra urgency to every song.

Even though they’ve got a heavy arsenal at their disposal, the members of Melkbelly might be at their most exciting when the dust settles. Take “Cawthra”, for instance. In an interview with our Lior Phillips, the band revealed that it was the record’s most difficult song to record, and with good reason; (mostly) stripped of the powerful (but occasionally derivative) rock impulses that pervade the rest of the record, the band instead plays small ball, letting Miranda Winters’ alluring voice and wry lyrics do most of the heavy lifting. It’s a winning formula and one that would be welcome in greater doses on future records.

Nothing Valley doesn’t remake the guitar rock world in its own image, but it doesn’t need to. Its success comes from the same playbook as the head of its label: translating the sounds and styles that fuel ‘90s nostalgia into newer, more relevant work. Much like Speedy Ortiz, Melkbelly have the good taste and even better talent to make the familiar sound fresh and fearsome. Powered by The Breeders’ cool, Lightning Bolt’s frenzy, and some of the band’s own magic, these strange, sun-baked tunes have summer written all over them; let’s see if they can last us the autumn.