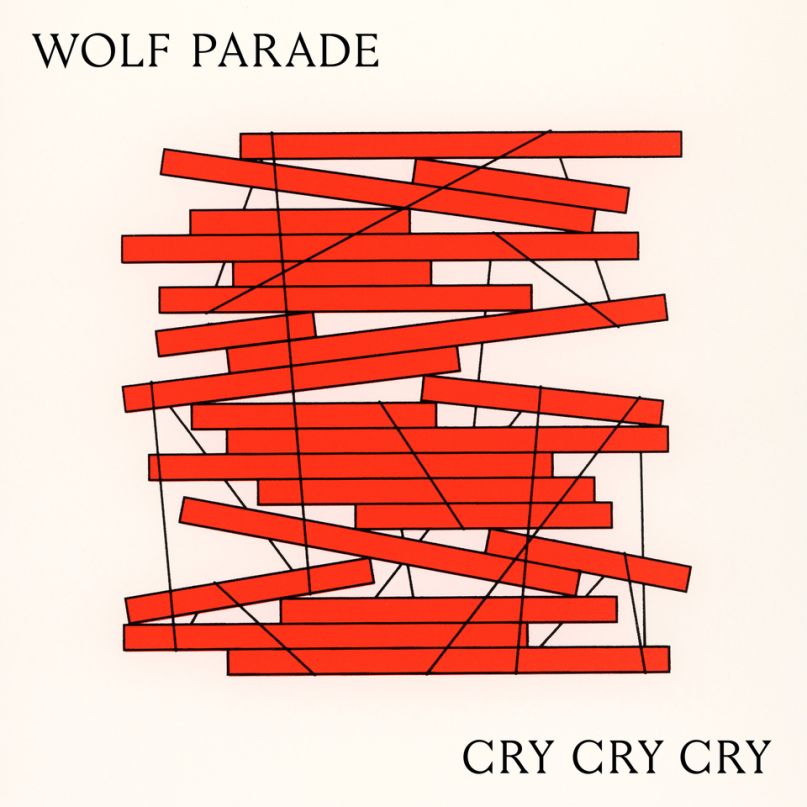 In 2005, Wolf Parade named their album in playful regret of an incident that occurred aboard an ocean liner. With Cry Cry Cry, they’re apologizing again: this time for growing older.

While the sound of their latest record doesn’t betray the seven-year hiatus that has followed 2010’s Expo 86, time has a funny way of making its presence felt. In the case of Wolf Parade, that means a lack of answers for the questions they’ve been asking since they formed in Montreal in 2003.

Spencer Krug is now 40, and co-leader Dan Boeckner will hit that milestone in February. Thus their panicked existential queries, often washing ashore in a tide of a synth and jittery pop-rock, have graduated on Cry Cry Cry from the aimless malaise of the twentysomething to the true dread of the middle-aged.

On “Incantation”, a driving piano line takes the lead as Dan Boeckner warns, “This dream of life will break your heart/ Over and over.” Later the song’s bleak message crescendos with an eruption of guitar and horns as Boeckner begs the heavens to “let morning come” as his words are swallowed in a dissonant cacophony. Likewise, opener “Lazarus Online” finds Krug brooding on the world with a little inspiration from poet Dylan Thomas.

The despondency of Wolf Parade has always been palatable because Boeckner and Krug excel at packaging bleak messages in boisterous hooks and spirited chaos. “You’re Dreaming” utilizes sunny guitars and rambunctious synth while Boeckner sings of systems in collapse and “metal in my blood.” A Leonard Cohen tribute comes in the form of “Valley Boy,” as Krug ponders whether the songwriter took his leave just in time from a world “fallen out of order.”

Sadly, it seems that all releases for the foreseeable future will be gauged by the metric of how they respond to the dark political turmoil present in every headline these days. There aren’t any explicit references to leaders of the free world on Cry Cry Cry, but the mood is befitting of a band aware that the world is in pain. It is an ideal approach, one that is sure to age better than a more direct undertaking. While the platform of hip-hop may be ideally suited for topical name-checking, Wolf Parade’s brand of indie rock is all the more powerful for not smearing Donald Trump across its lyrics.

Instead, the angst is personal. Centerpiece “Baby Blue” relies heavily on the percussive talents of drummer Arlan Thompson, who guides the sprawling track from its familiar beginnings into an elegant rage. The frenzied ode is Wolf Parade at its best, pushing its sound past the familiar to arrive back at the formula that first proved they aren’t simply a stepchild of Modest Mouse or a lark for musicians already established with other gigs.

Whatever Krug and Boeckner do next, it will always be Wolf Parade that most ferociously exhibits their talents. Cry Cry Cry may not contain the highs of Apologies to the Queen Mary — a stunning debut they will forever be judged against — but it does represent a band that has come back together not for lack of ideas, but rather thanks to a surplus of them.  Krug and Boeckner, like many songwriting teams before them, are surely aware that each is more than deserving of a solo spotlight, but luckily they are happy to instead huddle together under its warmth.

On the appropriately titled “Am I an Alien Here”, all of Wolf Parade’s tricks are utilized to perfection. The guitars simmer to a boil, pensive and still until they erupt in a chorus that demands an answer to a question at once timely and evergreen: “Am I an alien here/ Here in the cave of my skull/ Crawling around in the dark.” Far from the navel-gazing subterfuge that leaves many indie rock outfits bobbing at the surface, Wolf Parade isn’t afraid to dive deep. While they don’t always emerge with pearls, the effort is commendable, and one that leaves us hoping that the next time they swim away into the dark, they won’t take so long to find their way back.

Essential Tracks: “Am I An Alien Here” and “Incantation”