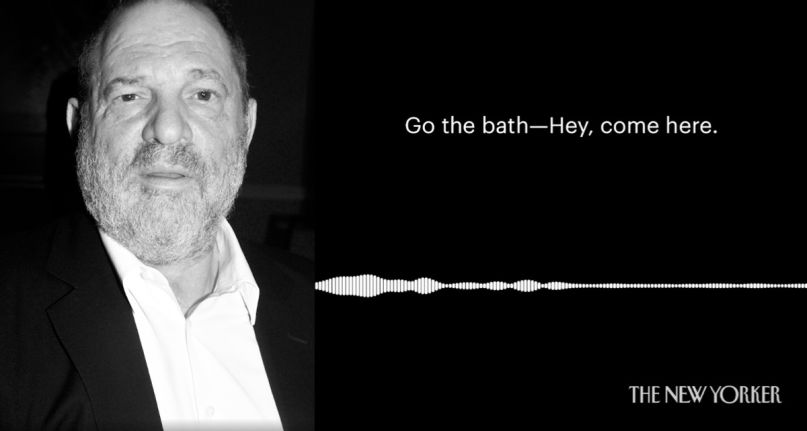 Allegations of sexual misconduct against disgraced movie producer Harvey Weinstein continue to pour in. A New York Times article published last week documented three decades’ worth of misconduct, including incidents involving actresses Ashley Judd and Rose McGowan. Now, as part of his own investigation for The New Yorker, journalist Ronan Farrow spoke with several more women who accused Weinstein of sexual harassment and/or assault. They include actresses Asia Argento, who said Weinstein forcibly performed oral sex on her; actress Lucia Evans, who also accused Weinstein of oral rape; and actress Rosanna Arquette, who contends Weinstein intentionally sabotaged her career after she rejected his advances. Actress Mira Sorvino also alleges to have been harassed by Weinstein, revealing that she was so fearful of his advances, she had a friend pretend to be her boyfriend.

The New Yorker also obtained an audio tape from an NYPD sting operation in which Weinstein admits to groping Filipina-Italian model Ambra Battilana Gutierrez. Weinstein was never charged by the NYPD.

Farrow also spoke with several employees or formal employees of Weinstein’s companies who acknowledge his behavior was an open secret. Many said they were afraid to speak out due to highly restrictive nondisclosure agreements and the threat of lawsuit. Ultimately, “none of the former executives or assistants I spoke to quit because of the misconduct, but many expressed guilt and regret about not having said or done more,” Farrow writes.

You can read the full article and listen to the tape here.

The Weinstein Company initially suspended Weinstein on Friday in the wake of the New York Times article, but after additional allegations surfaced, the company’s board of directors elected to terminate Weinstein’s employment on Sunday.