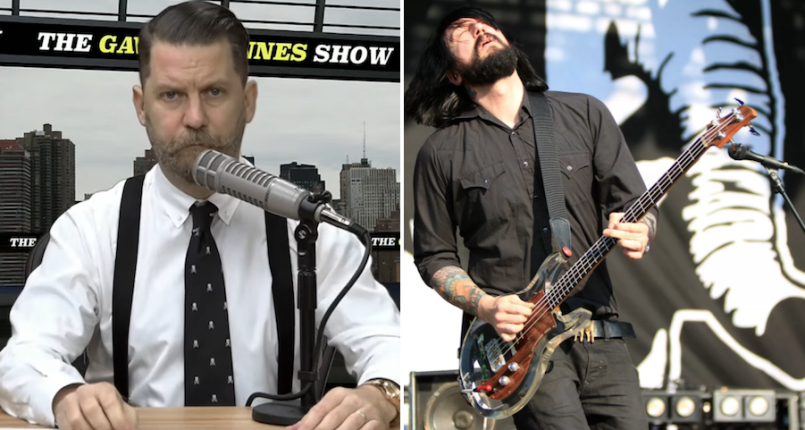 Update, October 30th: This post has been updated to comply with a Cease and Desist notice issued by a lawyer for McInnes and The Proud Boys. In compliance, all non-quoted references to the group being “alt-right” or “White Supremacists” have been clarified and removed.

Death from Above and MSTRKRFT member Jesse F. Keeler has found himself embroiled in controversy due to his connection with far-right media figure Gavin McInnes. Medium recently published a blog post pointing out the relationship Keeler has shared with McInnes over the years, and now the rocker has responded in a statement distancing himself from McInnes’ activities.

A co-founder of Vice Magazine as well as the misogynistic “men’s rights” group Proud Boys (whose slogan is “The West is The Best”), McInnes hosts a podcast on which Keeler was a guest multiple times throughout 2016. The two talked about gun control, Britain “losing its identity,” and the Paris terrorist attack at the Bataclan. Keeler also spent election night at McInnes’ party, something he says in his Facebook statement was a regrettable act of “morbid curiosity.” A February 2016 post on the Proud Boy’s website saw McInnes call Keeler a member of the group, though the post was removed on October 17th of this year.

“This is completely false,” Keeler writes of his membership with the Proud Boys. “I would never join that group. My connection to Gavin however is real, but begs to be clarified.”

Keeler then details how the two met around 2004 when DFA was releasing records via Vice’s label in the US. They “became loosely acquainted,” and “remained friendly” through the years. Noting that McInnes had a “wreckless comedy style” [sic] that he brought to Vice and later to stand-up, Keller said, “Over time, I watched many people distance themselves from Gavin both professionally and personally. I always perceived that as people just thinking he was ‘a little much.’ In short, I gave him the benefit of the doubt.”

He continues, “Soon after the election, I began noticing that Gavin was promoting violence and a form of radical politics that I absolutely do not agree with. I have always been anti-war and anti-violence. That is my baseline position.” He goes on to point out that he comes from an immigrant Indian family, implying that he naturally has a pro-immigrant stance. “The reality is that I am not ‘Alt-Right,’ nor a White Supremacist. The facts are I am a mixed race father of two and a musician.”

The statement concludes with an apology for “putting my family, friends and fans in this position. I never wanted to talk about politics, I just wanted to make music and leave that stuff alone.” Read his full remarks below.

For more on the Proud Boys, check out the This American Life podcast episode entitled “White Haze”, in which they give a thorough investigation into the group’s origins and connection to the white nationalist rally in Charlottesville.