Not scary enough, bloody enough, or funny enough to make for a satisfying slasher 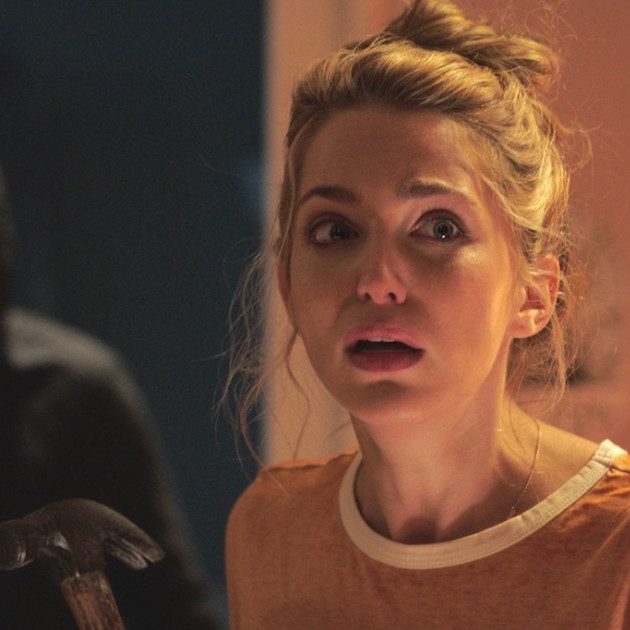 Happy Death Day could’ve been good. Groundhog Day as a horror movie? An endless loop of violence during which you’re given the opportunity to unmask your killer? Opportunities to investigate the personal lives of every suspect? And so, so, so many chances to watch our protagonist die? It sounds like a slam dunk, but Happy Death Day fails because it never leans into any of those scenarios meaningfully enough. It doesn’t lean into anything enough. At times it’s a campy slasher, at others a heartfelt drama. What it never is, however, is violent enough. This is a slasher flick with barely any blood featured in it, a feat of its own considering that it watches its main character get stabbed dozens of times.

Jessica Rothe stars as Theresa (although she annoyingly prefers “Tree”) who, after being murdered by a killer wearing a cherubic, single-toothed baby mask (it’s her college’s mascot, bizarrely), wakes up to find herself again living out the same day that led up to her death. She dies again, and again, and again, and every time she wakes up in the dorm room of sweet, virginal Carter (Israel Broussard), the nice boy who gave her a bed after she drank herself stupid. As in Groundhog Day, Tree eventually comes to accept the loop in which she’s trapped and tries to use it to her advantage, sometimes recruiting Carter in her attempts to find her killer. Is it the mean sorority sister Danielle (Rachel Matthews)? Her pushy onetime paramour Tim (Caleb Spillyards)? Or maybe the jealous wife of Dr. Gregory (Charles Aitken), the professor with whom she’s boinking?

Happy Death Day is a lot of fun when it allows itself to have fun. A second-act montage punctuating Tree’s comical attempts at espionage with her inevitable deaths serves as an example of what this film could have been: a campy, kaleidoscopic slasher that treats death like a punchline. Unfortunately, that montage is just a montage, and the rest of the movie busies itself with Tree’s belabored strides toward betterment and self-actualization, another arc it nicks from Groundhog Day.

But Phil Connors’ arc worked because, once he’d exhausted himself in Punxsutawney, there was nothing left to do but discover how empty he was. Happy Death Day, on the other hand, gives Tree a clear goal: find the killer. Yet the film never works to intercut that pursuit with the realization that she’s kind of a shitty person; rather, it latches her emotional development onto her investigative journey. The closer she comes to finding the killer, the better a person she becomes. That’s not really how it works. Connors had to come to grips with his dark heart to escape the loop, but for Tree, that journey is just a underdeveloped B-story which doesn’t really lend itself to pathos.

It also doesn’t help that Tree is a truly repellent character in the early going. Sure, Connors was an asshole, but at least Murray was funny. And it’s not as though Tree couldn’t have been, but where Matthews’ mean girl persona is a hoot, Rothe’s is joyless. While it’s great that Tree eventually learns to stop being a jerk, that shift hardly washes out the rancid taste of her introduction. Nor does it make you believe that a relationship between her and nice guy Carter would ever stand a chance, especially once she tells him she’s never heard of Bill Murray. Yes, the film references Groundhog Day, and, yes, this film operates on the assumption that there’s a single college student on this planet who’s never heard of Bill Murray.

Sadly, that may well be the scariest part of the movie. That is, unless you find chubby baby faces scary, as it’s the killer’s mask and the film’s oppressive score that do the heavy lifting in terms of cultivating scares, many of which strain credulity once you begin to consider various logistics and timelines. And while applying logic to horror is a task fit for a buzzkill, it’s also on the film to work up enough scares that the last thing the audiences is thinking about is how the killer made that music box twinkle without winding it up first.

With all of that said, Happy Death Day is a breezy, inoffensive enough watch, and packs a nifty twist that remains satisfying despite how obvious it is. But what it lacks is a clear vision, which falls on director Christopher Landon and writer Scott Lobdell. Because if it’s not scary enough, bloody enough, or funny enough, then what is it? Just another slasher movie hardly worth celebrating.