Harry Dean Stanton creates his own poignant farewell in this sparse, touching dramedy 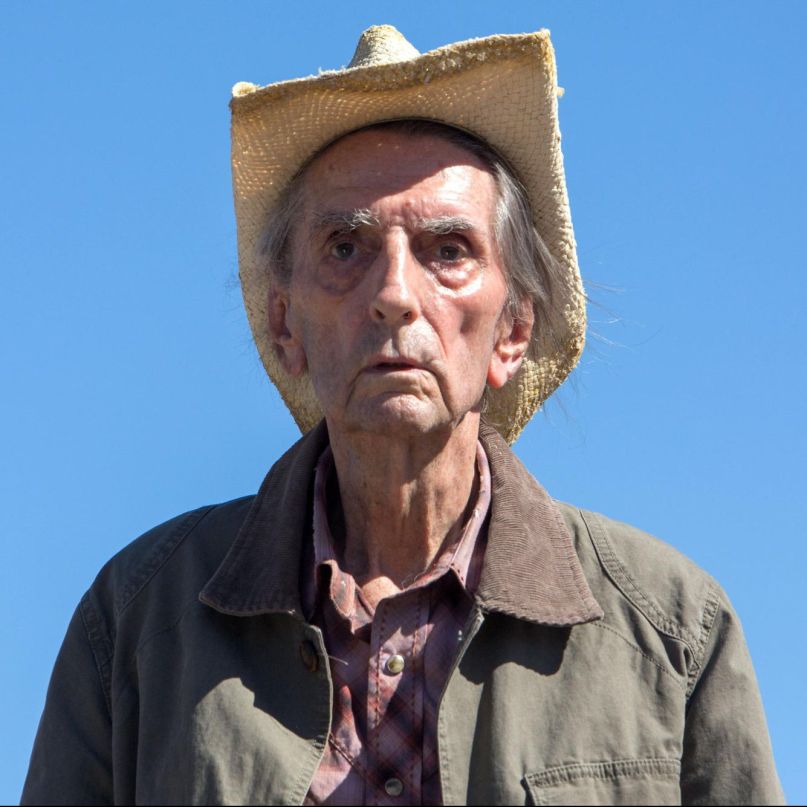 When Lucky (Harry Dean Stanton) has a doctor recommend that he quit smoking cigarettes before they kill him, he flatly notes that they haven’t killed him so far. Lucky’s already made it to 90, and as he figures it, “if they could’ve, they would’ve.” Eventually, the doctor grudgingly concurs about his quitting: “it’d do you more harm than good.” Lucky is the sort of idiosyncratic type who’s made it to such an age by marching solely and staunchly to his own rhythm. Though he’s friendly with the locals, he’s also a solitary man, the sort who knows and understands that “there’s a difference between being lonely and alone.” Lucky isn’t isolated out of desire, or out of some kind of old-timer tendency to set his jaw and press onward. It’s just where he’s found himself, and he’s made his peace with it.

Making peace in one’s late-winter years is central to Lucky, John Carroll Lynch‘s moving directorial debut. It’s an understated character study, an assemblage of small incidents occurring along the route taken by Lucky on his daily ritual. He turns on the radio, fixes his coffee in a pot that perputally blinks “12:00,” and does his yoga. He goes for his morning coffee at the local diner, where the kindly owner deadpans to him “you’re nothing” as a greeting. He does his crossword, and sometimes consults the locals for their knowledge. He buys yet another carton of whole milk and makes polite conversation with the shopkeeper. He walks by an unseen shop, loudly exclaiming “cunts!” to nobody in particular. He goes home to watch his game shows, and if he’s in the mood for company, sometimes he heads back out to the local bar, to commiserate with the oddball regulars. And all the while, he’s smoking like a chimney.

Lucky lives in this sustained loop not out of sadness, or some kind of arrested state, but simply because he’s found something that works for him, and has reached an age where he’s no longer interested in making dramatic alterations. Yet sometimes, they find him. He suffers a fall in his kitchen, despite his commitment to marginally healthy living, and there’s no better diagnosis than the simple truth that “you’re old, and you’re getting older.” Howard (David Lynch), one of the bar’s denizens, agonizes over the disappearance of his 100-year-old tortoise, President Roosevelt, and Lucky seems to be the only one who understands Howard’s pain. Sometimes his seat is occupied by an unfamiliar face at the diner, and it throws off the entire day. An estate lawyer (Ron Livingston) comes to assist the locals with their affairs, and Lucky rudely rails against him, refusing the “help” of a man who, as Lucky sees it, exists to exploit old men like himself for their own gains.

He’s not a god-fearing man, and much of Lucky‘s quiet power comes from Stanton and Lynch’s exploration of a man firmly convinced that nothing awaits us beyond this life aside from an endless darkness, as he confronts the oncoming reality of that darkness. This isn’t the sort of film in which Lucky reaches some kind of grand revelation; he presses on as well as he can, knowing what eventually awaits around a rapidly nearing corner. In one surreal flourish, Lynch sees Lucky follow a bloviating barfly out into the night, toward a hellish corner that promises nothing but terror. In a more straightforward sequence, Lucky is kept awake in the dead hours of the evening by the fear of oncoming death, and as Johnny Cash’s “I See a Darkness” floods the scene in all of its impending dread, Stanton’s eyes go wide with the terror of the incoming.

Yet Lucky and its titular protagonist typically eschew these dramatics until the moment calls for them, choosing to focus instead on the subtler moments of a man nearing his end. One particularly stunning exchange sees him share a coffee with a fellow WWII veteran (Tom Skerritt), who tells the forlorn tale of the horrors he encountered while serving in Japan near the end of the war. Neither man breaks down beyond a point, or offers any kind of hollow comfort; these are simply men who understand one another, what each has been through, and who will drift along on their own paths thereafter. But still, they find comfort in one another, and in coming across somebody else who requires no long-winded explanations. There’s a shorthand among people who come from the same bygone world, one that Lucky understands well.

In his feature debut as a filmmaker, after amassing more than a hundred credits as one of the great character actors of his time, Lynch matches his leading man’s nonchalant candor with unaffected filmmaking. It’s as solitary a film as Lucky is, much of the time spent simply observing him from a respectful near distance. His command of tone is so confident, however, that when the film lightly tilts in the directions of sentiment or the aforementioned surrealism, it’s wholly natural in its manuevering, devoid of the pretense or quirk that could’ve found its way into a story of this nature. The storytelling is episodic by design, and Lynch ably finds the ache and confusion in the most minute deviations from Lucky’s existential patterns. It’s a striking debut, and the kind of outing that will invariably leave audiences wanting to see more from Lynch behind the camera in the future.

But Lucky is a showcase for Stanton above all things. Given the actor’s passing less than a month ago, it certainly functions as a eulogy of sorts, both for a venerable actor’s unconventional filmography and for the era when men like Stanton could become movie stars of a certain sort. What’s perhaps most affecting about Lucky, though, is the way in which its muted presence becomes the perfect send-off for an actor who prided himself on living life in a similar fashion. There is power in his bold, drunken declaration late in the film that “I know the truth, and the truth matters,” but he doesn’t have to bellow or gesticulate. The tremor in his voice is more than enough. As final roles go, it’s hard to imagine one more appropriate than that of a man who’s long accepted his end as a natural part of existence, and who remains defiantly himself to the last gesture. And when he declares himself for no more or less than exactly who he is, in a bar full of people who love him more than he probably understands, the affection behind every one of their smiles is genuine. Lucky, and the man who gave him such vivid life, are among the truly inimitable.