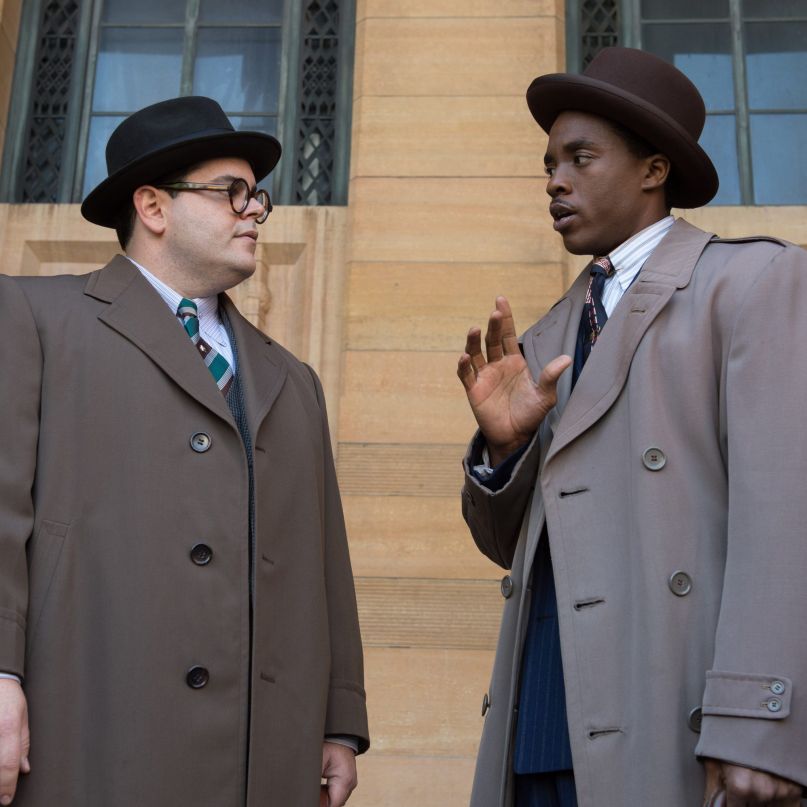 A man walks through a room, radiating power, intelligence, and righteousness. As he passes, heads turn. Whispers fill the room. Eyes widen. His sidekick stumbles along at his heels, flustered but no less in awe. He’s here to fight a battle, but there’s not a sword or shield in sight; he’s in costume, but there’s no trace of tights, cape, or any sort of logo you’d find on a lunchbox. It’s a bird, it’s a plane, it’s Thurgood Marshall, and he’s about to be kicked out of this members-only club.

If that sounds both awesome and a little silly to you, that’s about right. Marshall isn’t your average biopic, combining a familiar tactic — focusing on a specific period in the life of its subject, as illustrated by Capote and other such films — with a tone that suggests nothing less than a superhero movie. It’s a broadly appealing approach, resulting in a film that’s definitely entertaining, if a little thin at times. It’s also a hell of a missed opportunity. As fun as Marshall is to watch — and it is — it’s hard not to leave the theater wishing for just a little more substance.

It’s not as though the film lacks the actors required to pull off such a feat. Thurgood Marshall (Chadwick Boseman) begins the film as a rock star lawyer for the struggling NAACP, traveling the country to defend people who’ve been wrongfully accused of crimes based on the color of their skin. (Spoiler: this is also how he ends the film.) He’s sent to Connecticut to defend Joseph Spell (Sterling K. Brown), a troubled man charged with the brutal rape and attempted murder of his white employer’s wife, Eleanor Strubing (Kate Hudson). Upon arriving, however, he’s barred from speaking in the courtroom by a prickly judge (James Cromwell, good as always but sorely underused) and is forced to try the case by coaching insurance lawyer Sam Friedman (Josh Gad) through the proceedings, much to the delight of sneering prosecutor Loren Willis (Dan Stevens).

At this point, fairly early in the film, the superhero vibe blends with elements of the courtroom drama and the buddy comedy. It’s fairly effective at both — Boseman and Gad have engaging chemistry, and it’s great to see the latter in a role that requires some restraint — and for some, that alone will make this a must-watch. The courtroom scenes crackle with an energy that lands somewhere between Law & Order and Richard Gere’s big tap number in Chicago. It’s not realistic, but it’s entertaining stuff. The relationship component has deeper roots, enriched by the performances on which it centers, and at its best, the film starts to feel like the insightful character study one would likely expect.

Confusing enough, however, is how the character in question isn’t Marshall. Both Boseman and the script (by the father-son team of Michael and Jacob Koskoff) paint him as such a powerful, defiant badass that, aside from one briefly addressed family crisis, he seems more legendary than human. Easy to admire, delightful to cheer on, but not complicated or, heaven forbid, weak. Instead, most of the film’s interior life comes from Friedman; the lawyer’s transformation from frightened passerby to righteous crusader gives the film its spine. Gad does fine work, and while the script lays on the connection between the civil rights struggle and the genocide contemporaneously taking place in Europe a bit thickly, it’s not wrong to draw that connection. Friedman’s a compelling character, and Gad a capable actor. It’s just not what it says on the tin.

That’s a shame, because Marshall’s life story is cinematic on its own. Boseman, wildly charismatic, captures Marshall as a magnetic figure, and his drive and fervor are intoxicating. As he holds court, literally and figuratively, difficult and important issues rise to the film’s surface, sometimes handled with care and substance, and sometimes dismissed with a line or two. Neither Marshall nor the film are shallow cyphers, exactly, but neither are they given the time and thought of which they’re worthy. For every moment that offers (or hints at) depth and complexity — a chat about a plea bargain between Marshall and Spell, the cross-examination of Strubing, a quick interaction between Marshall and the wife of his host — there’s another that skims over the surface and calls it a day.

Marshall isn’t bad, not by a long shot. Still, it lends its source material an air of style over substance. It checks boxes in grand and lush fashion (and here’s perhaps the best point to mention Ruth Carter’s gorgeous costume design), but some of those checkmarks are a bit faint. A few are even wholly unnecessary: any visceral thrill that comes from meeting Langston Hughes (Jussie Smollett) evaporates when it becomes apparent that it’s just a chance to include the famous writer in the film, and that goes double for Zora Neale Hurston (Rozonda ‘Chilli’ Thomas), who arrives moments later. Director Reginald Hudlin’s stylistic flourishes zip from scene to scene, leaping forward from quips in a way that calls the stylistic hallmarks of movie musicals to mind. It’s fun, it’s lively, and it’s a hell of a show, but at times, it’s also just a little empty.

Marshall might make a hell of a musical, honestly. Set the scene, dim the lights, and allow the ideas that can’t be expressed in words alone to emerge in song. In fact, over the closing credits, “Stand Up For Something,” a tune performed by Andra Day and Common and written by the latter with Diane Warren, gets the blood pumping in a gratifying way. As it stands, the film recalls lines from another film that merely skims the surface of its source material, the Disney adaptation of Stephen Sondheim’s Into the Woods: it’s not good, it’s not bad, it’s just nice.

And Marshall is nice. It’s a fun ride, with a great cast, and it looks like a million bucks. It’s just not all that it could have been, and that makes even the most pleasant experience ring just a little hollow. Nice, as they say, is different from good.