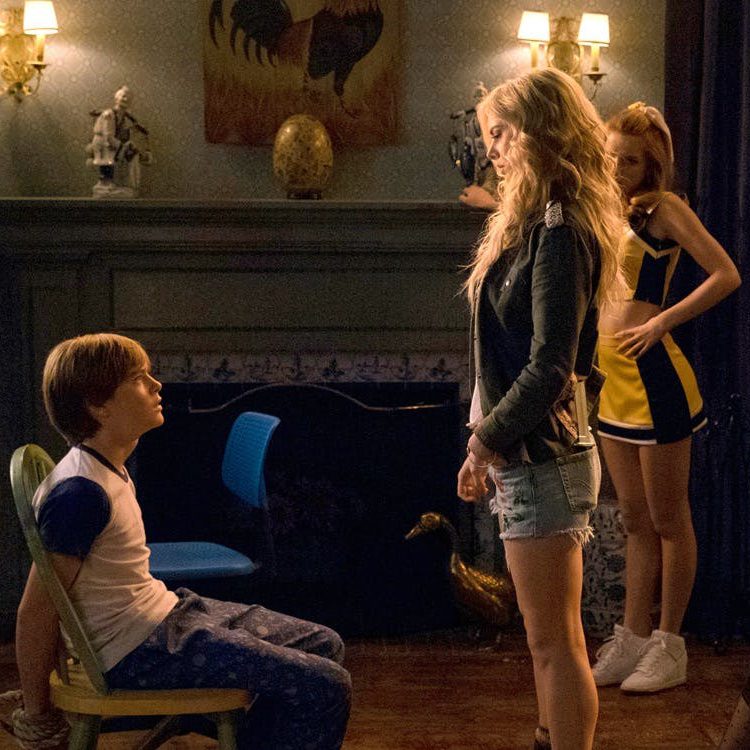 To call The Babysitter a miscalculation feels like an insult to math. That would imply that the parts are there, and they simply don’t add up. No, McG’s The Babysitter is just shambolic, a splatter of half-thoughts and shallow tween horror nostalgia smugly repackeged under the false pretenses of “meta,” looking for quick numbers to boost Netflix’s metrics in an appropriately slotted October release. It’s insulting. Unfunny. Blunt. It’ll leave a hell of a bitter taste in the mouths of general audiences and horror nuts alike.

Still want in? Candy’s candy? Fine, here’s what awaits within McG’s house of half-assed horrors. The Babysitter is a pre-pubescent romp about a young boy named Cole (Judah Lewis) and his babysitter crush, Bee (Samara Weaving). Double bonus: Cole’s best friend Melanie (Emily Alyn Lind) aids the boy in his misadventures, and is also a secret object of desire. Cole is yet another maligned geek, forever glum and bullied and just, you know, waiting for his moment of maligned boy redemption and greatness to fall upon him. Heroism. kisses from girls, etc. And with this film being pitched from the perspective of a 12-year old boy, everyone else is kind of shallow, simple, and self-centered compared to Cole. His parents (Leslie Bibb and Ken Marino) leave him alone to go “hand-job each other” at a hotel, if you need insight into Cole’s worldview.

(From here, we might as well spoil the hell out of this movie as to help encourage avoiding accidental autoplay viewings on Netflix. You’ve been advised.)

Perhaps the idea of the in-crowd’s evil is a fun and worthy twist worth exploring. At least, it would’ve been worth exploring if it were still the ‘80s and cliques/labeling still actually mattered. Modern teenagers are generally a little smarter than that. But Cole wakes up to the noises of spin the bottle. Assuming he’ll witness make-out sessions, which he does, Cole then bears witness to something far more crimson. Bee stabs a nerdy boy in the head. She drinks his blood. Cole watches in horror. McG, the creative mind that he is, overlays a bold-red “WHAT THE FUCK” across Cole’s face. Spicy stuff right there – memes as cinema. Suck it, Godard.

Shock and awful ensues as Cole must survive the night. The rest, well, who gives a good goddamn?

A word on the comic stylings of McG. The former MTV boy wonder never really evolved beyond non-sequiturs, bad photography, and juvenile humor that even the least discerning 13-year olds would drub. This is to say that The Babysitter is very much a late-period work from the guy who once scored ripoff kung-fu comedy to The Prodigy’s “Smack My Bitch Up.”

In McG Land, all girls have feathered hair and are perpetually sun-soaked. Driving lessons with dad aren’t in the mall parking lot, but on an empty L.A. race track with copious amounts of wide-angle coverage. The titular babysitter dancing to Foghat’s “I Just Want To Make Love To You” in slow-mo with ornate Spencer’s disco ball lighting is a creative choice, executed here at length. But to what ends? Everything is done to a showy degree, and it’s highlighted to the point of obnoxiousness.  Few shots come and go without needless color and effects filters. Sound bites like knife swishes and arcade game bleeps are added at random throughout. Gauche décor including a couch covered in chickens and lamps built on Confederate statues attempt to riff on Salvation Army suburbia. Wow, McG, way to stick it to the ‘burbs in 2017. Every detail is deliberate, brazen and leaves the film suffering from the Poochie effect – in-your-face for the sole purpose of begging for attention. There’s some argument to made about irony, or satire, or camp, in these choices and in this style of filmmaking, but that argument would be wasted on this of all movies.

Let’s break down some of The Babysitter’s more repugnant, useless, and even enraging stuff. The horse is dead from the start, and McG just loves to flog the thing with a noxious grin. Is a fetishistic, close-up, tongue-locking lesbian kiss between young actresses a joke on the male gaze in the horror genre? McG spends an awful lot of time on this “gag,” in any case. Or how about the use of “We Are the Champions” as Cole commandeers a car? Is that a knowing jab at how overplayed the song is? Maybe, just maybe, it’s still overplayed.

And here’s a brief synopsis of the worst movie scene of 2017 so far: There’s a shootout after Cole finally calls the cops. A pitchfork goes through an eye. The cheerleader of the group is shot in the breast with enough force to launch her across the room. The black killer gets blood on his face, and instead of screaming “gross,” yells about how he’s going to get AIDS. Cole is kicked in the chest by a jock and pushed down on the floor. And it’s all delivered at manic, sub-Tarantino Mexican standoff speed. Tilted angles. Rapid cuts. Lurid gross-out violence. Perhaps McG has been a sentient can of Monster Energy Drink all along.

The Babysitter is heinous.

Other words come to mind. Obnoxious. Moronic? Glib and callow, too. Rotten? Crappy? Useless? Dim-witted? One rotten-ass pumpkin of a movie? Here: since McG’s film is nothing but generic slasher bait, let’s put the thing in Halloween terms. If it were candy, The Babysitter would be the apple with a razor inside, smashed with a mallet, and still handed out to the locals without concern or care. McG, we’ll just have to stop coming to your house. It can’t be stated emphatically enough – stay away from The Babysitter.