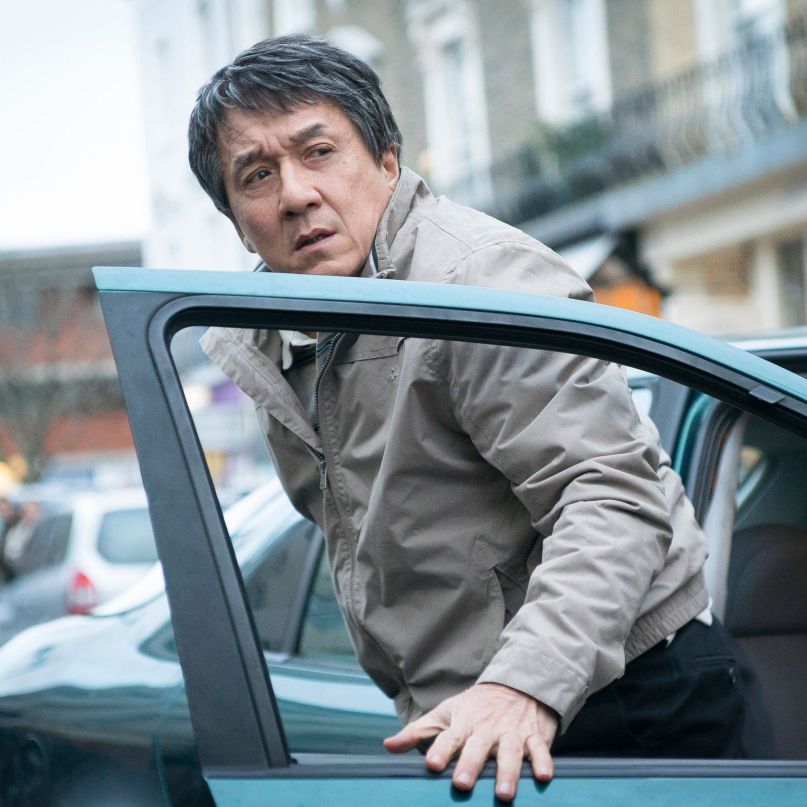 In a time where the aged action star is experiencing a curious renaissance (Liam Neeson in Taken, Harrison Ford’s various ’80s role revivals, the action-star AARP that is the Expendables series), it’s curious that the Stateside resurgence of Jackie Chan took so long. Breaking every bone in his body over the course of his career with death-defying stunts that practically defined the Hong Kong film industry, Chan is inarguably one of the greatest action stars of all time. When it came time to come back into the Western limelight (despite still having a respectable career in China), however, Chan seemingly chose to change directions in The Foreigner, a workmanlike but ultimately dour thriller that fails to make good use of him, or much of any use at all.

Directed by Martin Campbell (Goldeneye, Casino Royale) and based on the novel “The Chinaman” (no, really), The Foreigner stars Chan as Ngoc Ming Quan, a sixty-year-old man who runs a humble Chinese restaurant in London. In the film’s opening minutes, Quan sees his daughter brutally murdered in a bank bombing credited to the “Authentic IRA,” a rogue faction of the decades-dormant organization, and methodically works to find them and take his revenge. After failed overtures to the police and politicians (including Pierce Brosnan’s Martin McGuinness-type functionary), Quan takes matters into his own hands, Taken-style. He quits his job, loads his delivery van with makeshift explosives, and drives off to Ireland to make hell for Brosnan’s Liam Hennessy until he offers up the names of the bombers. You see, before starting a career in Chinese takeaway, Quan was a Special Forces operative during Vietnam, cultivating – how did Neeson put it? – a particular set of skills. And he plans to use all of them to get Hennessy to give up the names of the bombers.

What’s most surprising – and perhaps disappointing – about The Foreigner is that Chan simply doesn’t appear in all that much of it. Not long after Quan starts his mighty quest in earnest, he simply disappears into the woods surrounding Hennessy’s summer home, occasionally popping out to bomb a car or set traps for the IRA operatives that Hennessy sends after him. In deftly working around Chan’s age and relatively limited English by keeping his presence sparing, Quan mainly acts as an agent of chaos who pushes Brosnan’s character to work harder to find the bombers’ identities.

In those moments, however, Chan shines. Even in his sixties, the man plausibly and ably bests several men his size, supplementing his natural acrobatic talents with a MacGyver-esque penchant for improvised traps, gadgets, and bombs. (For a man so upset about a bombing, he sure does a lot of it himself.) It’s disquieting to see Chan play a character so bereft of his usual Chaplinesque physical comedy, but his hunched-over, wearied physicality still demands notice. Casting Chan in the role may even be to the film’s credit, leveraging his family-friendly persona against the haunted harbinger of justice that Quan becomes.

While Chan’s on the poster, and his sparse moments of action are brutal and intensely captured by Campbell, Brosnan is the film’s clear protagonist. Working with Campbell for the first time since Goldeneye, Brosnan grits his way through an exaggerated Irish lilt as a former head of the IRA whose connection to the bombings is dubious at best, but must still contend with Quan’s violently communicated rage. It’s a frustrated and yet entertaining performance, Brosnan capably juggling his roles as anti-hero and villain with a brutal mix of the teeth-clenching action of his James Bond and the calculating political machinations of his Tony Blair-like figure from The Ghost Writer.

Unfortunately, The Foreigner’s purpose as a star vehicle for both actors leads to a few script and tonal issues. The plot is unbelievably messy, a hodgepodge of code words and IRA allegiances and hidden pasts in the Special Forces that becomes difficult to keep straight. (One bizarre subplot involving incest and Macbeth-tinged political intrigue is especially superfluous.) The screenplay flirts with profundity by presenting a UK still wounded by the Troubles, but its commitment to creaky airport thriller clichés prevents it from saying anything of particular insight. And although Campbell spices up the intrigue with some suspenseful scenes – one nail-biting chase to locate and dispose of a booby-trapped laptop in a busy airport is a real highlight – the ending feels hollow and nihilistic, with little in the way of lessons or true closure.

Despite the bait-and-switch of Chan’s limited presence in the film, The Foreigner is slightly better than it appears on paper. Chan and Brosnan offer believable, intense performances, and Campbell coaxes Chan’s style into an abrasive brutality with moments of occasional invention. But make no mistake, this isn’t a Jackie Chan film, it’s a Pierce Brosnan film with occasional roundhouse kicks thrown in his direction. The thrills are there, but it’s not hard to be left wanting a lot more from a modern-day standoff between Jackie Chan and 007.