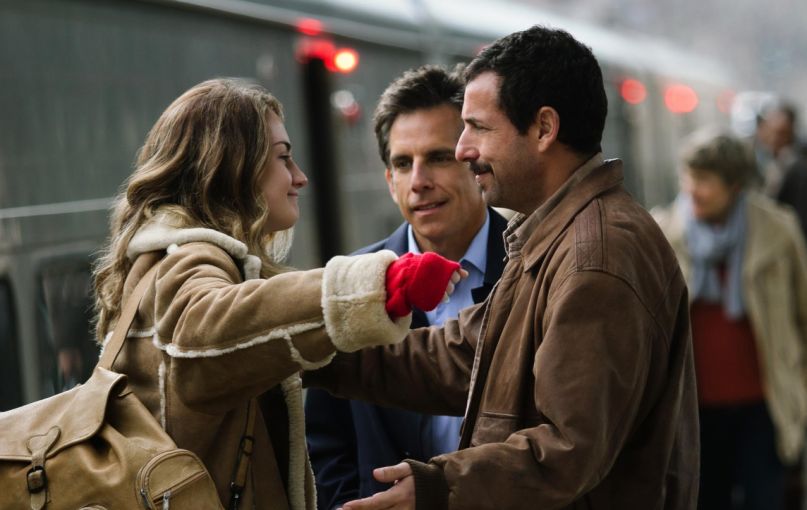 Family’s a bitch. Family’s work. Family’s life. There’s a weight to our loved ones that is both tough and obdurate, the kind that doesn’t move, but lingers, and that weight is often what makes holidays, festivities, or social gatherings so destructive. Because really, when it comes right down to it, family is the only thing in this world that can truly get under our skin, namely because it is our skin, and you can’t run away from that — no matter how hard you try. That’s not exactly the conceit of Noah Baumbach’s fantastic Netflix film, The Meyerowitz Stories (New and Selected), but those ideas are all over it.

The longtime friend and collaborator of Wes Anderson has essentially constructed his own Royal Tenenbaums, a comparison that’s about as obvious as it is dull, and where both feature eccentric upper-class families (not to mention, Ben Stiller), the similarities start to dwindle when you factor in the reality that Baumbach operates from for this narrative. Once again, we’re back in the ever-bustling and ever-changing New York City, only this time we’re not running down the streets a la Frances Ha or trying to comprehend its evolution a la While We’re Young, we’re trying to reason with the past that we’re given.

That past belongs to a family of greying, fractured intellectuals, the Meyerowitzes, who all shuffle under the shadow of their father and paternal figure Harold Meyerowitz (Dustin Hoffman). A long time ago, Harold was something in the art world, a sculptor of wood who commanded respect from his peers, critics, and apprentices, the latter of whom has found far more success than he (Judd Hirsch’s lovable L.J. Shapiro). That bruised feeling of obsolescence is not lost on Harold, though he always shrugs it off, walking around the streets of New York with a chip on his shoulder and a “protest” on his mind. “I think I’m doing the best work of my life right now, but that’s just one man’s opinion,” he says early on in the film.

But his devotion to the art life has had extended consequences on his children. It should be noted that Harold’s gone through four wives — three, if you don’t count the annulment — and he’s fathered three children in that time, who have all gone on to develop their own Baumbachian problems. There’s Danny (Adam Sandler), a failed musician-turned-house husband, who’s experiencing his own identity crisis as he sees his incredibly talented daughter Eliza (Grace Van Patten) off to college. There’s Matthew (Stiller), a successful accountant with myriad family issues, who was also his father’s favorite and thus a major disappointment, seeing how he chose an economical lifestyle over a creative one. And then there’s Jean (Elizabeth Marvel), the quiet one of the three, who has her own sordid past, one that leads to some of the best scenes of the film.

They’re all half-brothers and half-sisters, a fact that’s stated repeatedly throughout Baumbach’s incredibly witty script, and that only compounds their own respective issues. It’s essentially given them agency over the years to keep a great distance between them, and that lack of connection is partly what makes this narrative so fascinating. Rather than seeing the mending of their bonds, we’re more or less seeing the formation of them, and Baumbach uses this twisted reunion as a brilliant funnel for all of his world-building — and it’s quite a story, broken down into multiple sections, no less. Yes, he goes nuts with the exposition, but there’s little offense here considering, well, that’s exactly how it would go down in reality. How many times have you had to listen to your mother blabber on about the next door neighbor? Or your father rattle on about a photo you stumbled upon?

It’s very affecting, the way Baumbach orchestrates these exchanges, especially in how he’s able to oscillate between subjects and topics at the snap of his fingers. As we watch Danny and Matt “catch up” with their father, it’s downright aggravating and yet incredibly relatable how Harold keeps flipping the conversation, and how so many pleasantries and affectations are lost in the ether. Anyone who’s spent an afternoon with their family knows this feeling all too well, and Baumbach nails that detail to a T, even turning these manic moments into the occasional visual gag. Granted, he’s been embracing this style for some time now, ostensibly as an ode to the late Robert Altman, but they’ve never worked as well as they do here. Unlike, say, the final act of 2015’s Mistress America, where the dialogue overpowered the stilted scenery, the dialogue here matches the hustle and bustle that’s happening onscreen in one of Baumbach’s strongest marriages to date. Everything feels so goddamn natural.

Of course, much of that power comes from his unbelievable cast. Hoffman, looking like an old shepherd as Harold, is a natural fit for Baumbach’s style, careening away with lines both direct and throwaway. It’s the kind of late-era performance from a veteran that immediately soars up to the top of one’s resume, and it would be shocking if he’s not given some looks come awards season. The same goes for Sandler, who dusts off his acting chops from, oh, 2002’s Punch-Drunk Love, looking like he actually gives a damn for once as he breathes life into the little nuances Baumbach has designed for Danny. He’s one of the more fascinating watches of the film, finding the appropriate rickety bridge between an intellectual and an everyman, and his portrayal of a father offers a new spin on his boyish charm. But we’d be remiss if we didn’t at least mention Stiller, who admittedly leans on plenty of his own trademarks, and yet delivers a total whopper of a scene toward the end. It’s achingly similar to his own tearful admission at the end of Tenenbaums, except that he gets to really dig deep into those feelings, and it’s unbelievable.

Elsewhere, the film is a scrapbook of dynamite character performances. Van Patten is adorable as Eliza, finding the right blend between being respectful and hesitant of her elders. Marvel oozes with silent humor as Jean, and her mostly-silent performance is captivating in its ability to be physically affecting. Emma Thompson tempers the crazy as Harold’s quirky wife Maureen, getting some of the best lines of the film and delivering them with gusto. And who could forget Hirsch? The guy’s been a cuddly 70-something curmudgeon for the past three decades, and he remains one here, going toe to toe with Hoffman in a battle of veterans that should leave everyone smiling. If that weren’t enough, Baumbach brings back some familiar faces in his crew (Adam Driver, Michael Chernus) and offers a couple of curveball surprise gets (Candice Bergen, Sigourney Weaver) to the mix. It’s a decidedly New York cast that adds a degree of authenticity to the scenery that elevates the proceedings in the process.

With plenty of nostalgic music by the one and only Randy Newman, it’s easy to get the sense that The Meyerowitz Stories (New and Selected) is also a love letter to a past that’s disappearing by the day. As we’re seeing more and more of our favorite pop-culture heroes and intellectuals fade away — from Leonard Cohen to Sam Shepard, Mary Tyler Moore to this week’s Tom Petty — it’s becoming more and more clear that time is indeed changing. All throughout the film, there are references both passing and direct to the way New York isn’t New York anymore, from the buildings with “lots of glass” to the artists pissing on the past. These aren’t simply casual references but part of a larger message that Baumbach is trying to say, and as we see through Harold’s children, these changes aren’t relegated to just the baby boomers — everyone deals with it. But what Baumbach also suggests is that we don’t particularly care about those changes as much as we do our own mortality and how that relates to those around us. In other words, it’s not exactly what we leave on Earth, but who we leave it with, and how they carry that with them as they, too, move ahead into their own obsolescence. It can be pain, it can be joy, or it can be a pair of glasses. Family’s weird sometimes.

All of the time, really.