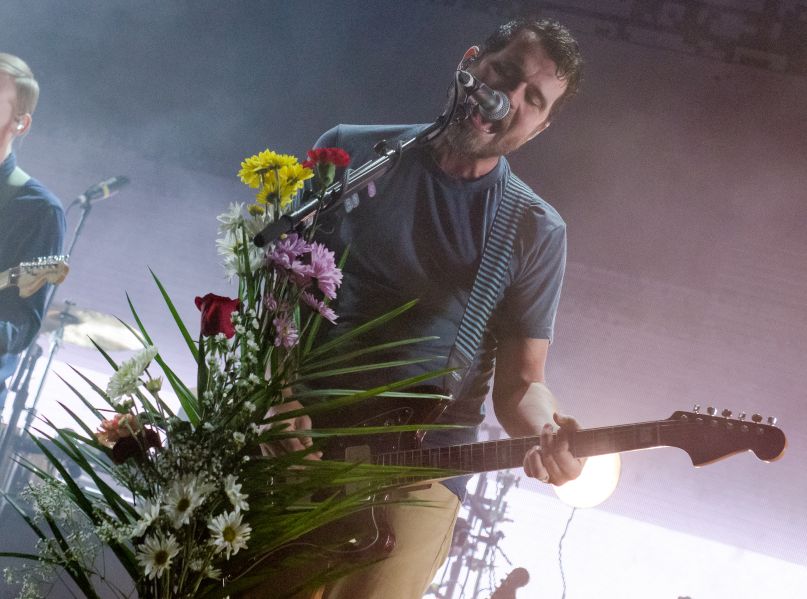 It’s strange to think that my first time at the gorgeous Brooklyn Kings Theatre could be my last time seeing the infallibly excellent Brand New. If that’s how it ends up being scrawled in the books, then it certainly won’t be reflected upon in disappointment. Still, after seeing that grand, majestic ceiling, I imagine I’ll be back to that venue someday soon. And after witnessing last night’s insane performance from one of the best-yet-still-niche bands out there, it’s hard to envision this being anywhere near their final show.

The last year has been wrought with half-confirmed, constantly hinted-at speculation that Brand New will split up in 2018. Jesse Lacey has said so himself in veiled terms, and it’s been printed all over their merch (which, it’s worth noting, is not available for sale on this tour leg). Then came Science Fiction, the Long Island group’s fifth full-length, almost out of nowhere, arriving to near universal acclaim even as the shadow of “final album” hung over all the discussion.

But this show didn’t feel anything like a finale — it felt exactly like a band touring on their most recent effort. The setlist hewed closely to the freshest material, opening with “Lit Me Up” and loading up on tracks like “137” and “Same Logic/Teeth”. While my eager-fan self wanted to experience more of that alt-country subtext that runs through much of Science Fiction’s latter half, “In the Water” and the fiery “451” provided a fair taste, and songs like “Out of Mana” and “Can’t Get It Out” proved the new connects with audiences just as well as the old.

It also demonstrated one of the band’s finest strengths: growth without loss. Through each record, they’ve managed to sound somewhat different without ever failing to sound like Brand New. “451” is perhaps the best example, with a dustier gallop than any other smash from Daisy to Deja Entendu that still slams into you as hard as anything that made The Devil and God Are Raging Inside Me such a masterpiece. It’s a greatness that’s often left under-appreciated outside what’s rankly described as “emo” circles, as if this sort of lyrical post-hardcore has a critical limit on its accessibility. (Just don’t tell that to the hundreds of people singing along to that acoustic “Soco Amaretto Lime” closer or the tour debut of “Okay I Believe You, But My Tommy Gun Don’t”.) Lacey actually credited openers Nada Surf with letting them know “you can just recreate yourself over and over again,” but Brand New have perfected and maintained it better than most.

More than just a chronicle of New York’s finest, the concert was in some ways the biggest Brand New has ever been. It’s not as if they’ve typically want for exciting stage lighting, but the screen rig that dropped in front of them for the first two and a half songs was a bit of a technological leap for the rockers. Plenty of bands use setups like this to various effects, but props due to whoever designed this one. Utilizing rows of LEDs to create gentle smoke effects or dissipating flames that synched with “Lit Me Up” excused the fact that you couldn’t actually see the band during the song. Even the background screens seemed more involved than past shows, like the found war footage during “137” or the cloud lightning during “In the Water”. It was far and away the most visual set I’ve ever seen from them, and that extended to the musicians themselves.

Usually a four-piece, the stage was filled by six people thanks to the addition of a second drummer and one Kevin Devine. From the get-go, it was clear Devine — a longtime friend of the band — was simultaneously honored and overjoyed to be part of the band. He leapt about like a kid going to his first Brand New show, jumping into the air and clearly right at home behind that flower-dressed mic stand. As he thrashed about with the ever-mobile Vinnie Accardi, wailed in front of Brain Lane’s drum kit, or swung his body in time to Garrett Tierney’s, it felt like he always belonged there and made the whole band seem larger because of his presence.

Not that they ever needed bolstering. These guys have been doing their thing — sometimes slowly, always deliberately — for 18 years. There seems to be the distinct possibility that they won’t make it to 20. Yet, every time you see them live, it becomes harder to envision a rock scene without them. Sure, that might just be the fan in me, and despite never being a chart-monster band, we all know how devoted Brand New fans can be. Still, from a strictly critical perspective, these guys are just too good at what they do to want them to stop. Of course, they don’t owe us anything, and if they feel it’s time to head off-stage and be with their families — as Lacey literally did last night, picking up his child as he exited post-encore — then thanks for the memories.

But surely they’ve still got a more formal farewell ahead of them. And if last night was just a short stop on that trajectory towards finality, it’s going to be one hell of a ride.

Setlist:
Lit Me Up
Gasoline
Out of Mana
You Won’t Know
137
Can’t Get It Out
Okay I Believe You, But My Tommy Gun Don’t
Sic Transit Gloria… Glory Fades
I Will Play My Game Beneath the Spin Light
You Stole
At the Bottom
In the Water
Same Logic/Teeth
451
Degausser
Jesus
Sowing Season
Encore
Soco Amaretto Lime