Mr. Robot Returns to Investigate the “Power Saver Modes” Inside Every Living Thing 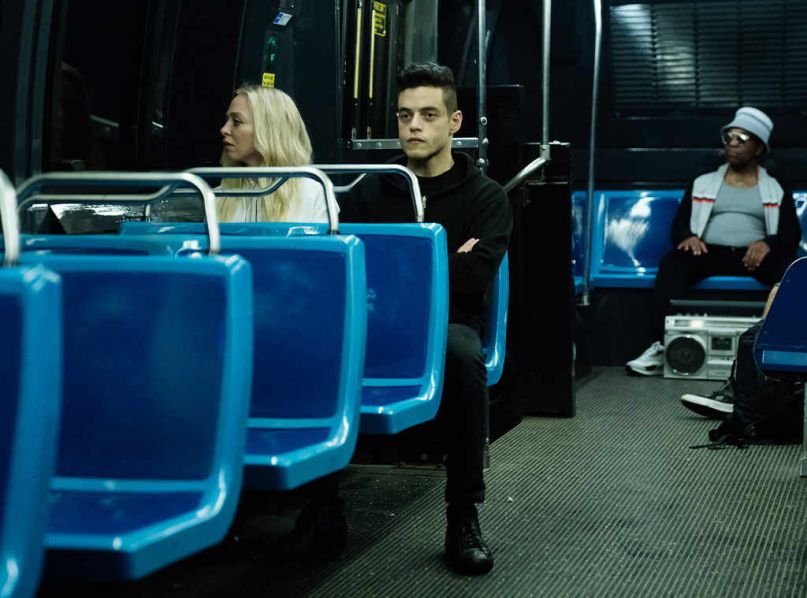 The following review of Mr. Robot‘s season three premiere contains substantial SPOILERS from last night’s return episode. We probably shouldn’t have to tell you that, but before somebody storms into our comments bellowing about how we ruined the episode, here you go.

The second season of Mr. Robot was the kind of narrative gambit that a show can only reasonably pull off one time. Showrunner Sam Esmail directed every episode, taking a kind of authorial control over his series that even many A-list TV names are usually willing to relinquish, and took the story of Elliot (Rami Malek) in a direction that entrenched some fans and put others entirely off in equal measures. After spending the first half of the season in a prison of his own delusional perceptions (and also, y’know, an actual prison), Elliot discovered that Mr. Robot (Christian Slater) had kept plenty busy without his awareness; with the help of the largely non-present Tyrell Wellick (Martin Wallström), the mysterious “Stage 2” of F-society’s attacks on E-Corp looked to continue on. In an even more aggressive nod to Fight Club than the invocation of “Where Is My Mind?” near the end of season one, an entire building was to be demolished, killing everybody inside and eradicating the last backup records of an entire world’s debts.

Some complained that the character drama on which the show’s many perspective twists had been built was being relegated to the background in favor of meticulous plotting. Others wanted a faster articulation of the show’s budding eccentricities without the self-aware toying that Esmail seemed to be employing with his audience. Last night’s third season premiere, “eps3.0_power-saver-mode.h” responded to these grievances with a loud, decisive “Why not both?”

Perhaps the wildest takeaway from “eps3.0_power-saver-mode.h” is how much happens without even checking in with FBI agent DiPierro (Grace Gummer) or Joanna Wellick (Stephanie Corneliussen). There’ll be time for them in the coming weeks, and Agent DiPierro’s presence was felt more allusively through Darlene (Carly Chaikin). But we’ll come back to that a bit later. The episode had a narrative thrust that, whether you preferred the ambling madness of S2 or not, was largely non-present through last year’s run. After a blackout appeared to herald the end times for New York City at the end of the final cliffhanger and Elliot was left lying with a gunshot wound he took on in hopes of reclaiming control of his mind from Mr. Robot, the whole city blacked out. That’s where the episode picks up (more or less), with Elliot wandering the darkened, crazed streets (in a Josh Groban T-shirt, hilariously), attempting to shut the backdoor he and Angela (Portia Doubleday) had previously installed that would allow the demolition plot to be carried out.

But then, as previously mentioned, a lot is happening in “eps3.0_power-saver-mode.h”, and it’s an understatement to say that more is happening than Elliot can possibly comprehend. Malek’s bug-eyed disorientation has always carried a great deal of depth, but the concern of this first episode is largely derived from just how many people are exploiting Elliot, of whom he’s aware and unaware, and to what ends. Hell, he ends up disabling the backdoor before the halfway mark of the episode, and yet this accomplishment only sends him careening further into the void, as he and Darlene are taken away by Dark Army operatives to meet with the mysterious Irving (new addition Bobby Cannavale), a shadowy operator with an earpiece who helped remove Elliot’s bullet and brusquely reminds him that it’d hardly be difficult to put another one right back in again. Over conversation at the Red Wheelbarrow BBQ, where Irving briefly rails against the ethics of punch-card freebies earlier in the episode, Elliot demands that Stage 2 be called off, and Irving politely demurs.

Too politely, of course. Because as it turns out, Stage 2 is still in full swing, and so is Mr. Robot. If Slater’s presence on the show has too frequently been mined to “gotcha” ends at points throughout the show’s run thus far, he did exemplary work at pivoting the character in what was always going to be its inevitable final form: the evil alter ego to Elliot’s unwitting innocent. Slater dusts off a bit of his Heathers-era menace in his brief “eps3.0_power-saver-mode.h” appearance, allowing some genuine terror to flicker behind his affably maniacal gaze. If Elliot wanted to destroy the world under the auspices of helping people, Mr. Robot wants the anarchy that the Elliot of the show’s pilot fetishized and that he’s since come to regret. To that end, Slater reveals himself to Angela, who bluntly affirms that “I’m not going to talk to you like you’re him,” but still takes Mr. Robot to Irving and makes assurances that the version of Elliot wanted by Whiterose and the Dark Army alike is the version they’re now getting. For the moment, anyway.

This seems like a good time to mention that Angela has evidently taken several gulping swigs of Whiterose’s endlessly powerful Kool-Aid; after passing a Lynchian entrance test last season, the episode’s second biggest reveal is that she’s now yet another party in Elliot’s life that aims to use him for greater ends. Tyrell’s odd season-ending declaration that he loves Elliot is mirrored here by Elliot’s observation of Angela that “she doesn’t love the people who love her. She loves the people who don’t.” It’s far too early to say if Angela is Whiterose’s perfect pawn, as one of the few people with whom Elliot shares a genuine emotional connection beyond his general detachment, or if she’s likewise playing a grander game, but Doubleday delivers one of her better single-episode turns to date here, slipping into the role of Elliot’s new “manager” in the same way she buried all of herself to slip into daily labors inside E-Corp. The more Angela makes herself disappear, the better she is at playing the games of the powerful.

But there’s one moment in which she seems to drop the facade. When she asks Elliot about what he’d do if he could undo everything that happened, from the hack to the untimely deaths of both of their parents, she’s either revealing herself as an elite manipulator of Mr. Robot’s caliber, or she knows something Elliot doesn’t. And given the episode-opening image of Whiterose musing over Elliot’s temporary utmost importance in front of what appears to be a gigantic hadron collider, she just might. Ever since BD Wong’s time-obsessed Machiavellian presence was introduced, fans have debated the possibilities of time travel and parallel universes as related to Mr. Robot, and given that “eps3.0_power-saver-mode.h” opens with a nuclear plant’s tour guide discussing parallel universes, Esmail is undoubtedly playing with the idea of turning Mr. Robot into a very different kind of show. Yet, it’s not entirely beyond comprehension, even in context of what’s otherwise been a fairly plausible series up to this point. Elliot spent the first season giving himself over to the hedonistic fantasy of carefree anti-capitalist anarchy, and the second learning how many good people get hurt on the path to such a thing. Now, he’s just trying to regain control, and what more control can a person have than dominion over time and reality themselves?

But then, mistrust has always been central to Mr. Robot, of politics and society and even the noble anarchist warriors themselves. It’s also central to “eps3.0_power-saver-mode.h”, from Angela’s duplicity to Whiterose’s acknowledgment that Elliot’s value has an expiration date for her to Irving’s currently unknown motivations. It even manifests in Darlene, Elliot’s other true emotional tether in this world, who seems oddly insistent on getting a comprehensive full picture of what he was up to during his “disappearing act,” even as she’s panicking about being the next name on the Dark Army’s hitlist. (Chaikin enacts one of pop culture’s more unsettling and realistic panic attacks of recent vintage in this episode, and it’s a harrowing piece of performance.) It’s highly likely that Agent DiPierro’s willingness to let Darlene in on the FBI’s investigation of the 5/8 hack stopped at an office visit, and if she is in fact wearing a wire, it’s merely another affirmation of the show’s core thesis: trust nobody, least of all yourself.

The episode is rife with Esmail’s creative hallmarks; as its writer and director, he confidently sends the series careening into yet another new direction without missing a beat. By now, viewers likely have their entrenched opinions of whether they like the referential play of Mr. Robot or not; judging by the show’s ratings over time, a hardcore few do and a broader many did not. But it’s nevertheless one of TV’s boldest current series, one willing to reinvent itself at will and draw every character into endless suspicion, and even if some of its maneuvers fail to stick the landing, far more hit with a blunt-force impact. Sure, it may feel like a bit of a letdown to have the E-Corp demolition plan end so abruptly, but Mr. Robot has reached the point where it’s beginning to transcend such mortal concerns. Esmail has grander designs, ones that could expand beyond the limits of time and space. He also hits mute on his own show at one point just to jab at the chaotic background noise, but hey, “showy” is the space that it inhabits, and Esmail does it better than many.

Yet, even as “eps3.0_power-saver-mode.h” sees Mr. Robot regain some of its nihilistic sense of play, it also recalls what made the series such an unexpected hit in the first place: the human element. Although Elliot struggles to connect with those around him and the world at large, his need for the contact from which no human is exempt has always hummed beneath all the Easter eggs and storytelling fake-outs. And as Elliot launches into a frantic inversion of his “fuck society” monologue from two years ago, this time swinging the moral pendulum inward as he raves about how the revolution only gave the ruling classes more power and Esmail cuts Elliot’s meltdown with Trump-Pence footage, he poses a terrifying question relevant to both the show’s world and, sadly, our own: “What if we choose weakness over strength?” Because we can, and, too often, we usually do. And in a world where nobody can truly be trusted, that’s the most unsettling possibility of all.