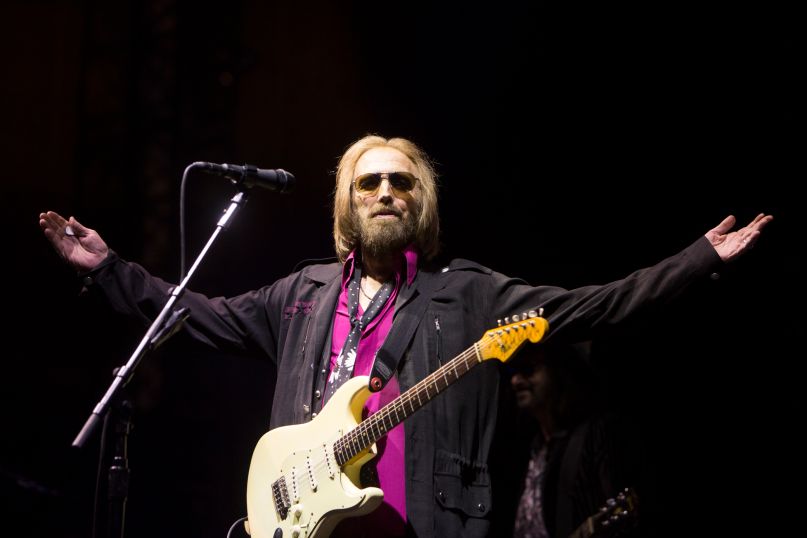 Tom Petty and the Heartbreakers // Photo by Philip Cosores

Rock music legend Tom Petty has died at the age of 66.

“On behalf of the Tom Petty family, we are devastated to announce the untimely death of of our father, husband, brother, leader and friend Tom Petty,” the musician’s longtime manager, Tony Dimitriade, announced in a statement released late Monday night. “[Petty] suffered cardiac arrest at his home in Malibu in the early hours of this morning and was taken to UCLA Medical Center but could not be revived. He died peacefully at 8:40 p.m. PT surrounded by family, his bandmates and friends.”

The confirmation follows an afternoon of confusion regarding Petty’s condition. Citing the Los Angeles Police Department, CBS News initial reported Petty’s passing shortly after 1:00 p.m. PT. However, after TMZ disputed the report, the LAPD clarified that it had “no information” about Petty, explaining, “Initial information was inadvertently provided to some media sources.” As of Monday afternoon, TMZ reported that Petty was “still clinging to life,” but was not expected to live through the day. The musician’s family had a “do not resuscitate order” and a chaplain was called into to his hospital room. Sadly, he lost his battle on Monday evening.

Though the man born Thomas Earl Petty would go on to become one of the most recognizable and beloved rockers of his generation, he started out small in his hometown of Gainesville, Florida. Inspired by his love of Elvis Presley and The Beatles, Petty left high school at age 17 to pursue a career with his band Mudcrutch. The outfit never broke out beyond their local scene; years later, however, he reunited the band for a full-length album, Mudcrutch 2, which was supported by a leg of touring.

Following Mudcrutch’s breakup in 1975, Petty initially pursued a solo career before forming The Heartbreakers with former bandmates Mike Campbell and Benmont Tench alongside Ron Blair and Stan Lynch. Their debut, Tom Petty and The Heartbreakers, was released in 1976 to a modicum of success, though it was more popular abroad in England than in America. Even so, the album’s singles, “Breakdown” and “American Girl”, went on to become staples of the Heartbreakers’ catalog.

The band’s sophomore album, 1978’s You’re Gonna Get It!, cracked the Top 40 in the US, but its follow-up, 1979’s Damn the Torpedoes, truly solidified them as rock superstars. On the back of hits “Don’t Do Me Like That”, “Here Comes My Girl”, and “Refugee”, the album quickly reached platinum status. Petty and the Heartbreakers would go on to release 10 more records between 1981’s Hard Promises and 2014’s Hypnotic Eye, producing a string of hit singles along the way like “Don’t Come Around Here No More”, “Jammin’ Me” (co-written by Bob Dylan), “The Waiting”, “Change of Heart”, “You Got Lucky”, and more.

In 1988, Petty joined George Harrison, Bob Dylan, Roy Orbison, and Jeff Lynne to form the supergroup the Traveling Wilburys. Their initial single, “Handle With Care”, was intended only as a B-side for one of Harrison’s own solo singles, but was deemed so good that they ended up recording a full-length. Their Traveling Wilburys Vol. 1 debut came out that year, with the cheekily titled Traveling Wilburys Vol. 3 arriving in 1990, after the death of Orbison. That period also saw Petty launch his solo career, though it was largely nominally; many of The Heartbreakers featured on Full Moon River, the first LP released under just Tom Petty’s name. That album featured classics “I Won’t Back Down”, “Free Fallin”, and Runnin’ Down A Dream”. Wildflowers followed in 1993, spawning the Grammy-winning single “You Don’t Know How It Feels”.

Petty and the Heartbreakers were inducted into the Rock and Roll Hall of Fame in 2002. He is credited for having sold over 80 million records worldwide and earned three Grammys over the course of his career, one each for Traveling Wilburys Vol. 1 (Best Rock Vocal Performance by a Duo or Group), “You Don’t Know How It Feels” (Best Rock Vocal Performance — Male), and Runnin’ Down a Dream (Best Music Video, Long Form).

Just one week ago, Petty wrapped up a North American tour celebrating the 40th anniversary of the Heartbreakers with three shows at the Hollywood Bowl.

Petty was seen as a staunch supporter of artistic rights. In 1979, he took a legal battle to ABC Records when they were sold to MCA Records, refusing to be transferred to a new company without his consent. He eventually signed to MCA subsidiary Backstreet Records, but when the label revealed it intended to release Hard Promises for the “superstar pricing” of $9.98 (a dollar more than the standard $8.98), he threatened to name the record Eight Ninety-Eight. MCA eventually backed down. More recently, he and Lynne amicably settled with Sam Smith over similarities to the latter’s hit “Stay With Me” and the classic “I Won’t Back Down”. Petty and Lynne are now listed as 12.5% co-writers on the track. “Let me say I have never had any hard feelings toward Sam. All my years of songwriting have shown me these things can happen,” Petty said in a statement, adding, “Sam did the right thing and I have thought no more about this. A musical accident no more no less.”

Petty is survived by two daughters with his first wife, Jane Benyo. He later married Dana York Epperson in June of 2001.