SUSTO get their revenge on a tire-slashing creep on new track “Drug Money”: Stream

Plus, the band explains 10 Things to do when you hate someone repeatedly slashing your tires 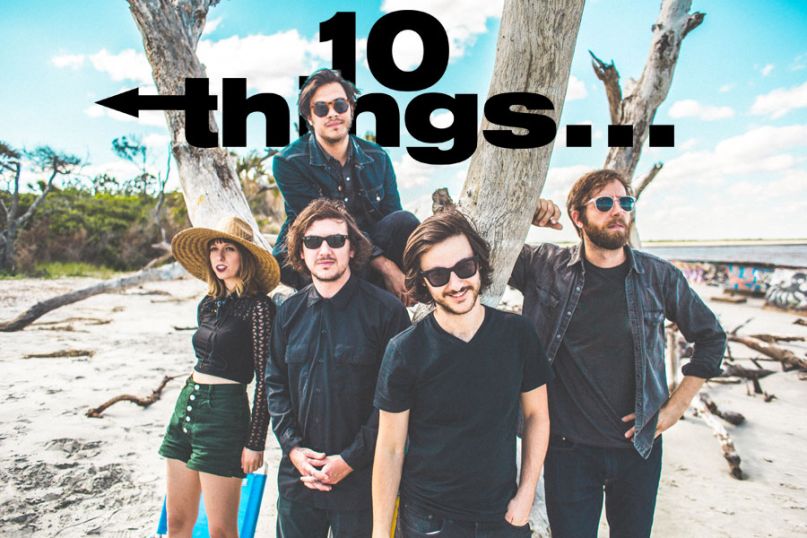 Alt-country outfit SUSTO dropped their latest album, & I’m Fine Today, earlier this year. They subsequently found themselves picking up a larger fan base as they toured with the likes of Band of Horses and The Lumineers. Now, the ranks the Charleston five-piece’s devotees is set to grow once again as they get ready to release an expanded edition of & I’m Fine Today on this Friday, October 20th.

The digital-only re-release features seven previously unreleased bonus tracks that further develop the album’s themes of gaining confidence and understanding in who you are. In the case of “Drug Money”, for example, it’s about finding the strength to stand up to an asshole who won’t stop slashing your tires.

Okay, so it’s a little more tongue-in-cheek then the rest of the album, but it’s presented with the same sort of twangy storytelling with which SUSTO fans are familiar. The song grooves like a good-ol’-boy jam, just a little bit psychedelic and irresistibly fun. That’s true even when Justin Osborne sings about hanging their tormentor from a tree only to cut him down and shoot him in the head. Look, the jerk deserved it, okay? Take a listen below to find out why.

Minus the killing (we assume), the story of “Drug Money” is actually based on real life events. Writing the song was the band’s way through the harassment, and to help others through similar situations, they’ve presented 10 Things to do when you hate someone repeatedly slashing your tires.

Know when you’ve been targeted.

When you’ve had an excessive amount of tires slashed in a short amount of time, there’s a good chance that someone is targeting you or your friend group/house specifically.

Don’t get too frustrated.

Once you realize that you’ve been targeted by a tire slasher, your first response is usually “what the fuck?” That’s completely normal, give yourself a few hours to feel this way, then remember that you are a human being and you are capable of remedying your situation by identifying your slasher and confronting that person and/or retaliating with brilliance.

If someone is repeatedly slashing your tires, chances are that it’s no arbitrary or even related to an isolated incident. Moving forward, it’s important to create a list of potential slashers, and weigh the level of motive, and history of dubious behavior they each may have.

Look for a pattern.

If you are repeatedly finding your tires slashed in the morning before work, then your slasher is probably acting late at night or even earlier in the morning. These details are important and helpful in narrowing your suspects and establishing a surveillance plan.

After a few attacks, you may have begun to narrow your list of potential slashers and hopefully even begin to establish a timeline of when exactly the crimes have been committed. Now it’s time to catch the person in the act. If you are from a rural area or know someone who is, you may have access to one or more “game cameras” (cameras used to catch photos of wildlife). If you can acquire any of these, set them up in inconspicuous places and wait to get a photo of your slasher. Remember to change the batteries and memory cards often.

Remember cops are no help is these sort of issues.

Let’s be honest, you didn’t really trust the cops before this started happening, and you didn’t really want to involve them anyway. But, if you do choose to go the “legal” route, don’t be surprised with your own frustration when you are told “there is nothing we can do” after explaining your situation, story, and evidence to the police. The frustration will fade, and you will again realize that you are a human being and are therefore capable of settling the issue yourself.

It’s important to make sure you have a plan in place for how exactly you are going to seek revenge on your slasher. Nothing is off limits, after all, you have had 20+ tires slashed in a 6 month period. That adds up, and it warrants extreme retaliation. Take into account your resources, skills, and schedule. Then go for your plan…

Before you go for it, write a song about how you’re going to do it.

This one is self-explanatory (see SUSTO “Drug Money”) but it should be noted, that this may also help you vent some of your frustration.

Always make sure you are dating a level-headed badass.

If you follow this rule, then your significant other will have shared your frustrations and heard your plans. They will realize that you could end up with life in prison (or dead) if said plans are carried out. The right partner will then wait for you to be occupied playing a show, then go to your slashers house, show them photo evidence of their crime, threaten them and demand repayment for damages done.

If all goes well, you will then be repaid. With this repayment money you will buy a black cat, name her Kiki, and live happily ever after… until the slasher reads this and gets pissed all over again.