Converge – The Dusk in Us 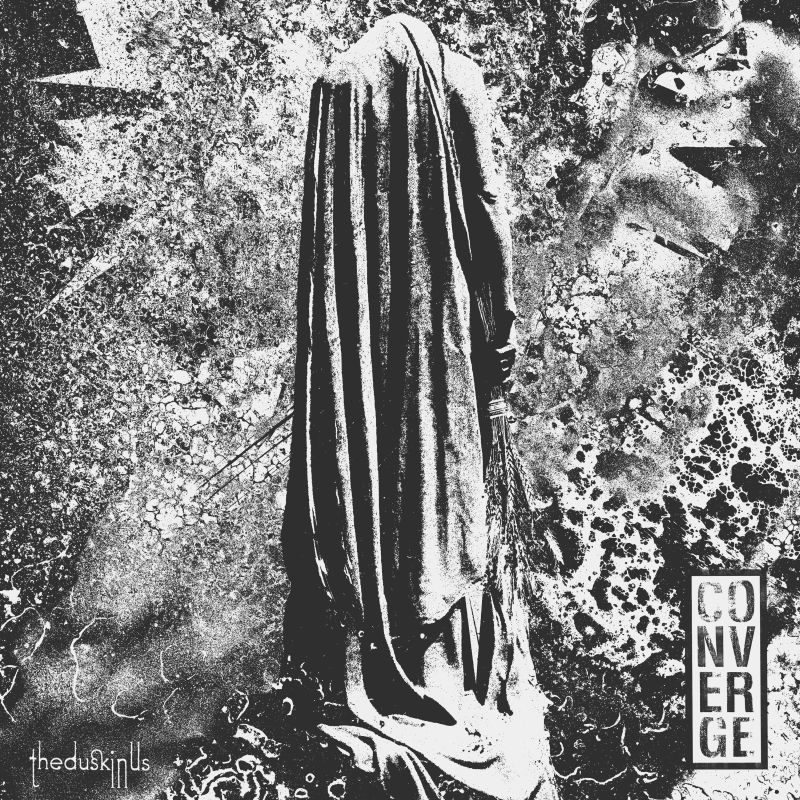 As introductions to a band’s music go, few seem poorer than the music video for Converge’s 2006 single “No Heroes”. An unintentionally droll use of green screen, it presents the New England metallic hardcore quartet performing amidst the rapid collapse of what we can surmise as some urban dystopia, Boston or Providence or somewhere equally as worthy of downfall. The members bounce and grimace against the blustery winds of the hellish CGI backdrop, appearing less in its destructive midst than artificially detached from it.

Musically, however, “No Heroes” sounded like a band on fire, quite literally. Even fans of the pioneering Victory Records metalcore brutes that preceded Converge could tell this tightly wound fury was an extraordinary leap forward from the punk breakdowns that had become bog standard. Those caught in the vivid rapture of this unhinged sound surely forgave them such heavy-handed hokum. From the flames, frontman Jacob Bannon’s inscrutable barks barely resembled human speech, an extreme technique used to great effect previously on their landmark full-length Jane Doe.

Sixteen years since that 2001 album and five years since the release of the critically acclaimed All We Love We Leave Behind, Bannon apparently wishes to be understood. Coming months after the release of his meandering yet sincere post-metal solo venture Wear Your Wounds, he comes to The Dusk in Us with heart beating in hand. Opener “A Single Tear” ponders the profound power of parenthood in a manner this genre of music rarely if ever purports itself in. Long acknowledged for the poetic quality of his lyricism, Bannon makes clever metaphor from Soviet nuclear abstention on “Arkhipov Calm” while drawing parallels between sport hunting and moral cowardice on “Wildlife”.

Produced as usual by guitarist Kurt Ballou, one of metal’s most sought-after studio men, The Dusk in Us generally fails to grab hold of one’s neck and draw blood into the mouth the way Axe to Fall did. While Converge thankfully haven’t veered towards the pop metal of their erstwhile tourmates in Mastodon, their vital growth as a creative unit has nonetheless padded their cudgel. Even still, with half the group on the so-called wrong side of 40, “Eye of the Quarrel” packs a mighty wallop, as does the expedient grindcore workout “Cannibals”. The violent, serpentine riffs of “Under Duress” are barely tamed by drummer Ben Koller’s decisively dominant pounds. “Murk & Marrow” takes a similar tack, twisting before the eyes while coiling around the legs.

Where Converge’s musical maturity shows most is in its demonstrated devotion to the low and slow, a tradition popularized by the immense Jane Doe title track and Axe to Fall late bloomer “Wretched World”. As the album’s longest song, the title track spends its seven minutes mining the grimier crevices of Americana and the brighter side of shoegaze. Recalling their discography’s spots of balladry, “Thousands of Miles Between Us”  builds a mood towards the coming bombastic doom of “Reptilian”. Here, Black Sabbath worship contorts to a gallop, with Bannon’s motivational words “we must lose sight of who we are to know what we can be” serving to unleash the domesticated yet remembering beast once again.

A decade removed from the “No Heroes” video, the “I Can Tell You About Pain” one tells a ghost story in close quarters. Within a modest apartment presented as existentialist haunted house, its protagonist receives fleeting visitations from stylish spectres between glasses of milk and mid-century cartoons. The quality of the peculiar clip suggests professionalism on a modest budget, the inverse of the comic grandness of its not particularly distant precursor “No Heroes”. Most notably, the band does not play. Their ferocity now fully adapted to new habitat, Converge benefits from a self-control that, years prior, lacked it.