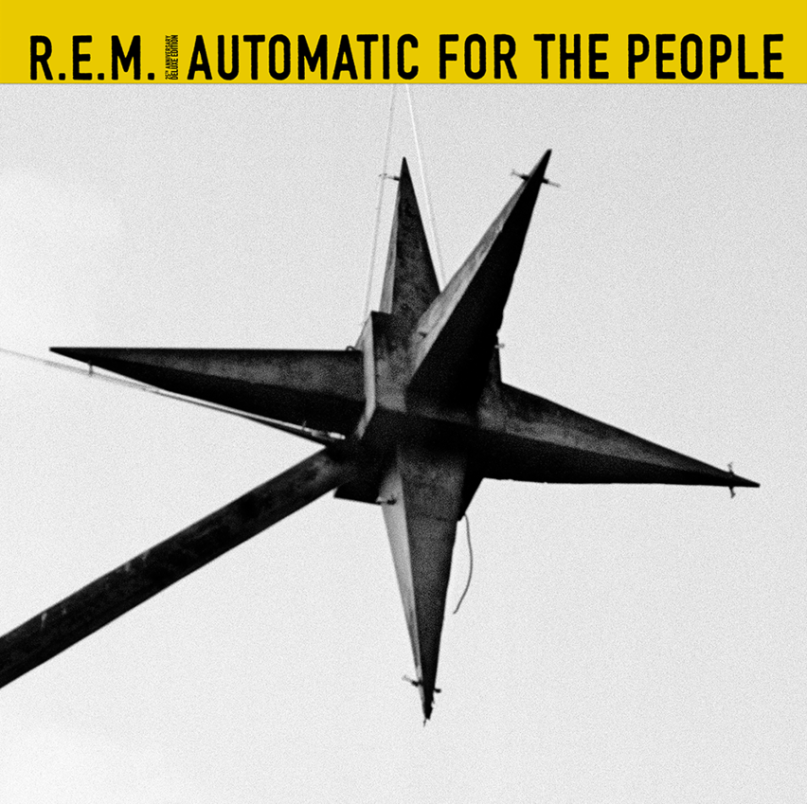 Automatic for the People was intended to be a fast rock album. So if you’ve ever needed proof of R.E.M. as a band guided by their unforced collective muse, their eighth full-length was a start. Peter Buck, Mike Mills, and Bill Berry all began recording demos and trading instruments in hopes to break away from the largely acoustic and folksy Out of Time, their previous and highest-selling album ever thanks to the inescapable worldwide hit “Losing My Religion”. But as the tunes took shape, somehow they turned out even slower and more funereal than the last record. Michael Stipe took notice, and the lyrics he penned centered largely around death and loss.

Yet the project that was simply called Star at the time wasn’t like any morose album before it. For one thing, rumors circulating that Stipe was stricken with AIDS added a veneer of how being a celebrity means losing control of your truth, even in death. Songs like “Monty Got a Raw Deal” and “Man on the Moon” concerned fallen stars Montgomery Clift and Andy Kaufman, respectively, who both lived unsettled Hollywood lives and declined in health under bizarre circumstances.

And “Nightswimming”, the solely piano-led beaut of a Stipe-Mills duet, reminisced about the band and friends’ pastime of skinny dipping in the early ‘80s, no more, no less. It also became swept up in the AIDS rumors around the same time Stipe was beginning to identify as queer publicly. For the first time in their careers, R.E.M. were beginning to face the damages of fame and the responsibilities of commandeering a cult of personality, not to mention the futility of it. Stipe spent significant time campaigning for Michael Dukakis in 1988, but that was nothing like this. He ended up hiring a private investigator to try and find the source of the AIDS rumors, but didn’t vociferously deny them as to not dehumanize actual people living with AIDS. So it’s safe to say that Automatic for the People concerned the death of innocence, too, which is just as well when only Meg Ryan saved it from containing a song entitled “Fuck Me Kitten”. Dukakis lost, by the way.

(Ranking: Every R.E.M. Album from Worst to Best)

But while the hilarious, winsome “Man on the Moon” was rightfully selected by the world as this album’s pick hit, and “Sweetness Follows” adapts a hymn-like sway submerged in plenty of organ courtesy of Mills, along with a startling and soothing series of chord changes for the refrain, it’s “Try Not to Breathe” that finds the optic nerve to stare down Stipe’s maker. Literally: “These are the eyes that I want you to remember.”

So the much-touted maturity of R.E.M.’s apotheosis comes not from the somnambulant tempos nor John Paul Jones’ baton-passing string arrangements (dig that “Kashmir” when the electric guitar kicks in midway through “Drive”) nor the theme of mortality itself. It’s how they engaged with it, invoking love to defeat premature suicide in the monster hit “Everybody Hurts” or as a witness in “Try Not to Breathe”. Or when they orbited mortality with sex (“Star Me Kitten”) and political unrest (“Ignoreland”) and literal laughter (“The Sidewinder Sleeps Tonight”). A pretty lifelike balancing act, huh? It all comes to a head on the beautiful (kind of a redundant term with this record, no?) closer “Find the River”, a meaning-of-existence song that is the closest thing R.E.M. ever made to a “Once in a Lifetime”, as Stipe sings: “The ocean is the river’s goal/ A need to leave the water knows.” God, he was such a great writer in 1992. He puts Dr. Seuss and Nescafé on the same astral plane in one cut and rails against Reaganism in another, concluding that he was merely venting his spleen, “but I feel better having screamed.” It’s so rare that four white dudes selling 18 million units knew the limits of their powers; lord knows Bono didn’t.

Naming the album after the slogan of their favorite soul-food enterprise showed they wanted to balance all this death with as much life and light as they could, and musically that manifested itself in sea-shanty basslines (“Try Not to Breathe”), backlit doo-wop (“Everybody Hurts”, “Star Me Kitten”), and half-speed ragtime (“Nightswimming”), in addition to Buck’s terse jangle that gave them this foundation in the first place. In lieu of actual rock, they liberally quoted from David Essex’s “Rock On” in the opener and first single “Drive”, addressing “kids” before the very next track warp-speeds all the way to old age. Out of Time was curiously titled in retrospect; this was the real examination of our time on earth and what we fill it with.

Speaking of time, now that Automatic for the People is a quarter-century old, the band opened the vaults for this reissue to give us a sparkling remaster, a sturdy live set from the 40 Watt Club (though it hardly begs for canonization like 2009’s revelatory, rarity-packed Live at the Olympia), and a juicy third disc of demos. Some of these are pretty fun, indeed, as you can hear “C to D Slide 13” become “Man on the Moon” before Stipe gave it its iconic lyrics on the very last day of recording. Others are merely an exercise in matching the working title to the finished version: “Passion & Voc (demo)” became “Try Not to Breathe”, “Ignoreland” used to be called “Howler Monkey”, and “Sweetness Follows” once bore the unceremonious title “Cello Scud”. Do you really need to hear “Pakiderm”, a dry run at “New Orleans Instrumental No. 1” that nearly doubles the length of the completed version, twice?

The real hidden gems are the completely previously unreleased “Mike’s Pop Song” and the Natalie Merchant duet “Photograph”, reclaimed from the excellent 1993 pro-choice benefit comp Born to Choose. But none of the generous inclusions will convince you that Automatic for the People could’ve been stronger or more carefully curated. That’s the irony of these reissues; it takes a theoretically sui generis album to warrant a full expansion, yet it’s rare that the bonus material could actually enhance it further.

If you needed this set to remind you of Automatic for the People’s enduring excellence and shimmering timelessness, there are worse ways to spend a few hours in 2017. But as the kids that nobody tells what to do in “Drive” harden into the power-stealing bastards of “Ignoreland”, R.E.M.’s take on the passage of time is more chilling than ever. Even Andy Kaufman may have lived to regret the development of fake news. Hopefully sweetness follows.

Essential Tracks: “Man on the Moon”, “Try Not to Breathe”, “Mike’s Pop Song”, and “Photograph”