U2 – Songs of Experience 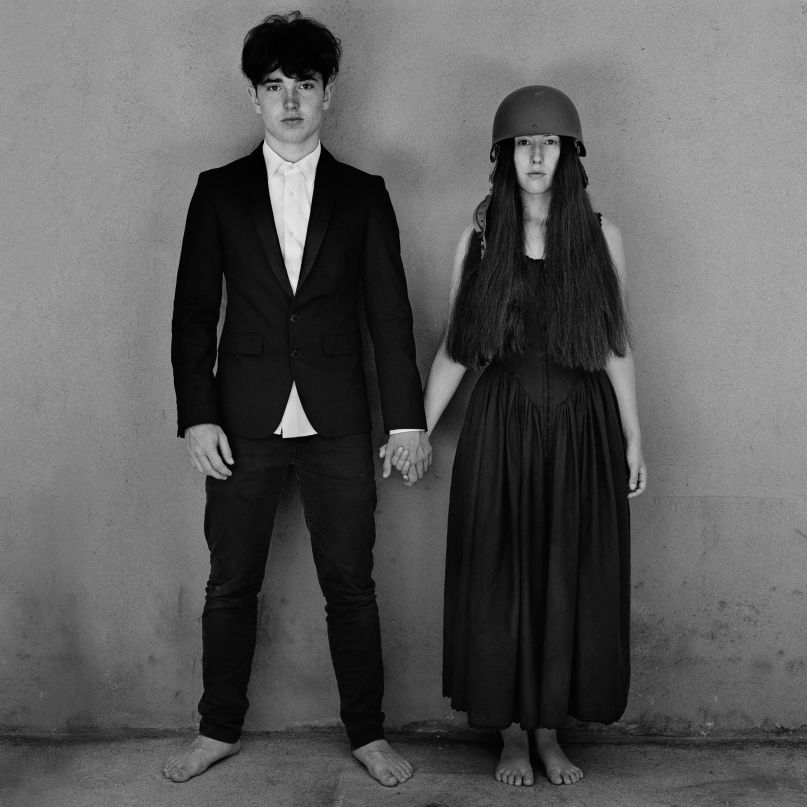 On a warm Houston night this past May, during a stop on U2’s 30th anniversary tour for The Joshua Tree, Bono looked tired. Though the band played a wonderful rendition of one of the best rock albums of the 20th century, there was a sense of resignation. Maybe it had to do with recognizing that it had been 30 years since the band’s peak at the top of the world, or that their stage design meant that a large section of the stadium they had sold out on their extravagant 360 tour eight years earlier was left dark and empty behind their massive screen. Both in terms of the marketing and the music, U2 made a blunder in 2014, and even if Andy Samberg’s cutting parody in Popstar was less commercially successful than Songs of Innocence, the album’s reputation remained. And so, U2 spent the lead-up to Songs of Experience, their 13th studio album, in a position they’d been valiantly yet inevitably rallying against since the waning glow of 2004’s How To Dismantle an Atomic Bomb: a legacy act.

After the rollout of 2014’s Songs of Innocence overshadowed the quality of the actual album, inoffensive yet non-essential, U2’s approach towards its follow up feels conciliatory. Originally planned as a companion album, the new release morphed as sessions were scrapped, songs were re-written, apologies were made, and the band buckled down to renew good faith. In that regard, U2 does try to switch up a formula that was starting to grow stale, and even if certain experiments fail, like an auto-tuned verse on opener “Love Is All We Have Left”, it finds the band at least trying something different.

One of the key decisions U2 makes to set this album apart from their discography is to let loose on a pair of low-stakes punchy tracks. Single “You’re The Best Thing About Me” was a surprise initially, a breezy, polished love song that feels playful. There’s no grand statement or message, but rather a direct song about two people, singing from the heart instead of the pulpit. Then on “The Showman”, the band crafts an upbeat jaunt that veers close to power-pop — enjoyable and carefree. These don’t all work well, as the overproduced sheen of “Get Out of Your Own Way” and “Summer of Love” strip the life from the song.

Yet all too often, Songs of Experience finds the band retreading well-worn material. “Love Is Bigger Than Anything In It’s Way” jumps back to 2000, taking the aggressive optimism of “Walk On” but leaving out the underlying struggle and catharsis that made that a modern staple in their setlists, swapped here for treacly pathos. There’s “American Soul”, which makes its debut after being sampled by Kendrick Lamar on DAMN. earlier this year (he returns the favor with a preachy spoken word intro that plays to his worst impulses.) The song directly calls back to “Volcano” from Songs of Innocence, but its chorus and stomping blues-rock come off as an attempt to recreate “Vertigo”, only with the passion siphoned out. Even the background vocals on “Red Flag Day” recall an overproduced War outtake.

In an interview with Mojo, Bono explained that though the songs were close to being finished, they pushed it back and elected to proceed with the Joshua Tree tour first because of the changing political atmosphere. “It is a very personal album, and it’s not gonna become a political album overnight. But now it has to go through the filter of what’s happened in the rest of the world,” he remarked. The finished product has a bit of both, as songs like “The Little Things That Give You Away” and “You’re The Best Thing About Me” find romance in intimate moments while tracks like “Get Out of Your Own Way”, “Summer of Love”, and “The Blackout” aim for a political tone in ways that never quite gel, full of references that can feel shoehorned in.

Bono has admirably used his platform to speak out about the refugee crisis, but the opaque ways he addresses that on the record don’t quite connect with the power he aims for. The polished groove of “Summer of Love” sharply pivots into a string-backed message of resilience, referencing the “rubble of Aleppo” almost arbitrarily. Then on the bridge of “American Soul”, he makes a direct plea in the most strained way imaginable with the line “will you be my sanctuary refugee-sus.” On the soaring “Get Out Of Your Own Way”, he turns the lens on American history, with signifiers of a promised land, slaves and masters, and Lincoln’s ghost before proclaiming, “I can help you but it’s your fight.”

For decades now, U2 has stood as one of the pre-eminent voices in American rock history, whose music attempts to speak to the pulse of the nation. They’ve focused on mythologizing the message of the country, sometimes in grand, prescient moments like The Joshua Tree, and other times in stilted jingoistic attempts like 2002’s “The Hands That Built America” from Martin Scorsese’s Gangs of New York. While the Trump administration is never directly referenced on Songs of Experience, the record makes it clear that the band is struggling to develop a potent message in this era.

But Bono has been notably bipartisan. He works closely with George Bush on various aid projects and is even friendly with the former president, so he’s had some difficulties making a pointed political statement, one that doesn’t alienate the base. On “The Blackout”, U2’s worst song of the century, if only for Bono’s maddening attempt to force random names into the verses, the singer raves about the downfall of democracy with apocalyptic fervor resulting in a muddled mess. Granted, U2 certainly has no responsibility to write a song lambasting the American GOP, but the fact that they use so many nominally political signifiers throughout Songs of Experience without any substance behind them rings hollow. It’s like a #resist bumper sticker with no distinct ideology.

While the album as a whole is disjointed, it has moments of grandeur, like the understated majesty of “The Little Things That Give You Away”. The song, which dates all the way back to the sessions for 2000’s All You Can’t Leave Behind, had the honor of the only new song played on this spring’s Joshua Tree tour, a sign that the band believes it truly holds up alongside their classics. Bono sure knows how to call a shot, as the song finds a way to recapture the sprawling scale and momentum of their best work, full of yearning and a palpable heart, anchored by The Edge’s strongest guitar work in years. In hindsight, the band’s most moving ballads from The Joshua Tree came from wringing universal sentiments out of deeply personal statements, and that kind of message comes here from Bono to his younger self. By returning to this method of evolving grand sentiments out of simple conversations, the band makes perhaps their best song in over a decade.

It’s a rare moment, though, namely because Songs of Experience is so desperate to force one message-filled anthem after another. Compared to a deeply personal song like “Little Things”, the vague platitudes of “Lights of Home” or “Love Is Bigger Than Anything in Its Way” feel like empty gestures and motivational speeches. Bono’s lyrics are filled with bizarre non-sequiturs like images of a “baby crying on a doorstep,” devolving into self-parody like a stream of consciousness influx of supposedly moving images. Even the restraint of closer “There Is A Light” gives way to a queasy sing-along of inspirational quotes that tries and fails to be the next “One”.

For the first time in decades, Songs of Experience finds U2 confused about what kind of band they want to be. It’s not for lack of inspiration, as they can still craft stunning compositions, but rather an unintentional discord. Ryan Tedder’s production often renders the band stilted and lifeless, and the moments of carefree abandon put the self-righteous material in a harsher light. Songs of Experience is an album where the band’s best and worst songs of this century can exist next to each other, where vast rewrites make it apparent that multiple rounds of sessions went into the finished product. It’s a messier albeit more visceral affair than Songs of Innocence, one not afraid to take risks and fall flat on its face, but the triumphs are few and far between. And for a band that was once such a vital institution, that disparity is a tough place to be in.

Essential Tracks: “The Little Things That Give You Away”, “You’re The Best Thing About Me”, and “The Showman”