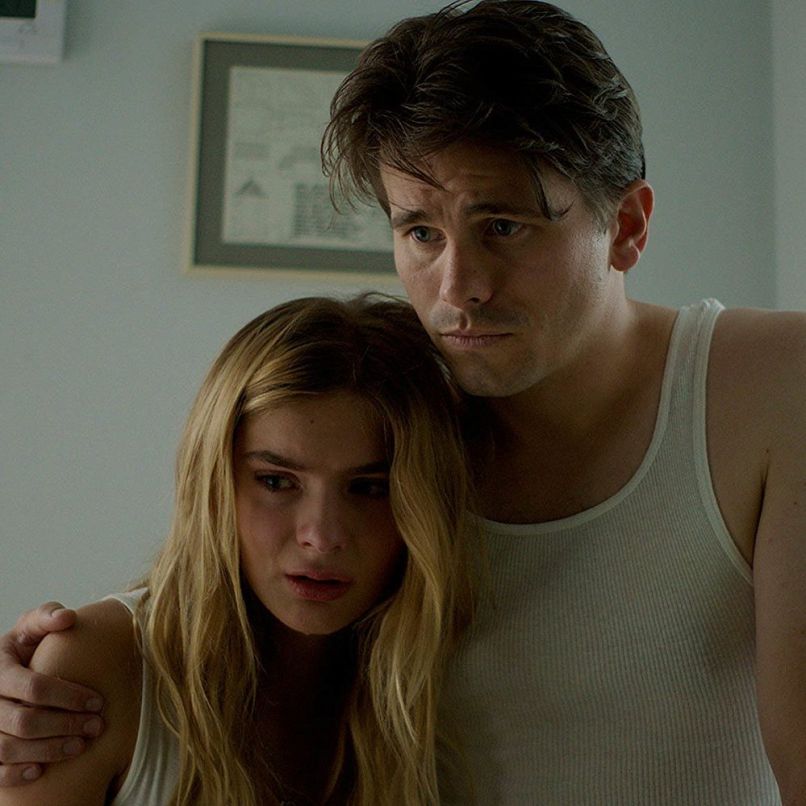 Bitch isn’t nearly as provocative as its title might suggest. Ostensibly the story of a suburban mother of four who, after years of ingratitude and infidelity, snaps and begins assuming the psyche and mannerisms of a feral dog, the events instead center on her shitty husband’s attempts to grow up. It’s a curious choice in a movie with such a striking, potentially subversive genre concept, as well as a title that, at least in the Meredith Brooks sense of the word, seems to promise some of kind of female rebellion or empowerment.

Yet writer/director Marianna Palka begins the movie provocatively enough. There’s a suicide attempt, some cunnilingus, and a bevy of barking dogs; from there, the first act unfolds with a thrilling, off-kilter intensity that barrels and sideswipes its way toward the canine transformation of Jill (Palka). As Jill discovers her growl in between fits of relieving herself on the kitchen floor, her neglectful husband Bill (Jason Ritter) flounders at his corporate job while finding himself completely clueless when it comes to actually caring for the kids. (His realization that kindergartners can’t buy their own lunch is an especially fun bit of business.) But the film lurches as it shifts into its second act — Jill’s sister, Beth (Jaime King), helps Bill get back on his feet as doctors and law enforcement puzzle over Jill’s fate. One doctor insists she needs full-time psychiatric evaluation, a request which Bill bizarrely rejects, despite Jill being hunched over naked and covered in her own shit. Instead, he says that she should be heavily medicated.

The implication, it seems, is that Bill simply wants things to go back to the way they were. Jill can continue cooking and cleaning while he sleeps with his colleague, Annabelle (Sol Rodriguez), wandering in during the wee hours of the night. But the way the film melds its absurdity with the measured, realistic behaviors of Beth and the medical professionals feels inelegant, as if Palka can’t decide if whether or not this story takes place in the real world. There’s a heightened quality to the early scenes, one where barking dogs leave answering machine messages, but the film soon morphs into a staid domestic drama as Bill discovers his humanity, leaving behind a sense of imbalance and inconsistency. Bill is quite nearly a cartoon at the beginning, so his transformation into a caring, empathetic dad is a bit hard to swallow.

That’s not for a lack of effort on Ritter’s part, however. His performance is sweaty, flustered, and relentlessly charming, even when the character is at his worst. Palka, too, is terrifyingly convincing as a dog, and the tight, dirty shots in which she films herself confuse the distinction between human and animal in unnerving ways. The film’s quartet of kids are also a delight to watch, and while their shifts in behavior, trust, and responsibility evoke everything from Mr. Mom to Don’t Tell Mom the Babysitter’s Dead, there’s still a sense of satisfaction to be had in their journey.

Bitch‘s third act is an improvement upon its second, mainly in that the movie allows itself to be weird again. There’s nothing all that primal about it — no gore or bloody devolution, as one might expect from such a premise — but the climactic scenes between Palka and Ritter are beautiful in their oddity and performed with a daring sense of vulnerability. In this way, they’re true to the story that Palka set out to tell here, but they’re also primed to disappoint viewers who came in expecting something far more sensational.

Even so, there are still some interesting themes to be taken from Bitch regarding marriage and the ways in which our evolutions and devolutions sometimes prove irreconcilable within long-running relationships. Is there any amount of compromise that can bridge these divides? How much do we have to risk to meet our partners where they’re now at? And is it worth it? While none of these questions feel as explored as they could have been in the film, they nevertheless linger on the mind after viewing.