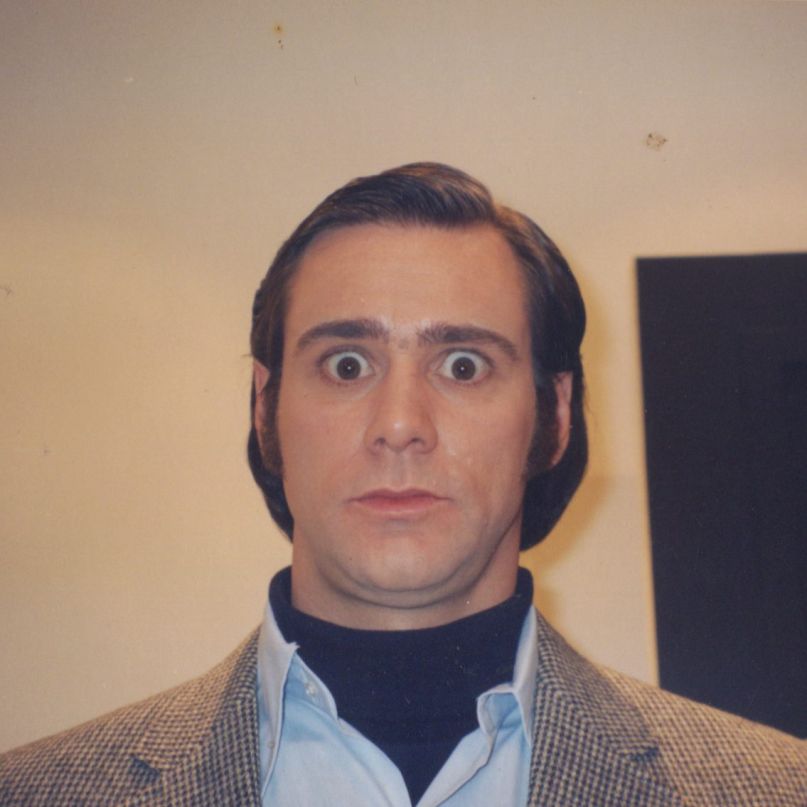 Was Jim Carrey a jerk or a genius? Let’s back up on that question a bit.

It’s insane to consider that Carrey basically guaranteed he’d never have to leave Hollywood after 1994. Ace Ventura: Pet Detective, The Mask, Dumb and Dumber: all mega hits. It didn’t matter that they were critically poo-pooed. The man was overnight gold, with enough cachet to last him practically the rest of his career.

But the weirder, and frankly, more fascinating story on that? Carrey says that he met a palm reader in L.A. shortly before those films were released, and the reader told Carrey – no joke – that he would release three huge movies in succession. It’s the kind of thing Carrey’s agents might have told him not to share in 1994, as he’d be looked at like a kook. This is the guy who made a name on talking out of his own butt, but that’s his style of comedy, and it’d make him far less discomforting than a Sunset Boulevard, hippie crystals, far-out sort of kook. Maybe he really is crazy. But I’m no shrink – just a curious viewer of Carrey’s new documentary about the time he broke bad while playing Andy Kaufman.

That palm reader story is just one of many fascinating, flummoxing anecdotes that piece together Jim & Andy: The Great Beyond – Featuring a Very Special, Contractually Obligated Mention of Tony Clifton. It makes sense that it would take nearly 20 years for Carrey and Universal to let the cat out of the bag on the crap he pulled while filming Man on the Moon. To be certain, Jim & Andy: The Great Beyond is an eye-opener of a documentary. Blurring the line between giving people what they want, and hiding the fact that it was a hellacious road in getting there, Carrey and director Chris Smith’s (American Movie) new documentary for Netflix and Vice recounts the manic “magic” that drove the 1999 movie. One man’s method becomes an entire production’s mayhem, and what a conflicting watch it makes for. Was Carrey’s process an homage to Kaufman, or just an excuse? Is this documentary something that may have been better suited for special features on a Blu-ray, or is it reaching for the stars with its unfiltered creative strife? It’s a testament to Carrey’s still-polarizing stardom that this film gains its manic mileage.

About that Andy Kaufman. Here was the godfather of alt-comedy, a cringe genius and manic absurdist who made his name goading Jerry Lawler, singing Mighty Mouse on SNL, and doing a wacky European accent as a man named Latka (oy) on James Brooks’ TAXI. His antics leaned into the uncomfortable, and his work blurred the lines of reality in a way that left audiences asking, “is this real?” He wasn’t afraid to commit, we’ll say – the guy would read The Great Gatsby in full to audiences while onstage because, well, why not? He passed away in the mid-‘80s, and his legacy continued to surface in the works of Mr. Show, ABSO LUTELY TV shows, and of course, Jim Carrey.

Jim. The man of a thousand faces was asked to portray Kaufman in Milos Forman’s 1999 biopic Man on the Moon. The reviews were mixed. The movie struggled commercially. And yet Carrey won a Golden Globe, which has always been easier for him than being recognized by the Academy. But the most interesting development to come from that film is the fact that Carrey remained in character the whole time. Or, characters, rather. He went method as Kaufman, and as Kaufman’s alter ego, the asshole lounge singer Tony Clifton (a role shared between Kaufman and his writing partner, Bob Zmuda in the ‘80s). To say the least, it’s really fucking weird to watch the footage of Carrey in the roles, and Smith gets full access to the EPK materials that Universal shrewdly chose to hide. Smith even convinces a shaggy, wistful, and admittedly rambling Carrey to comment on the footage.

To be clear, the footage is insane. Even hilarious at points. This isn’t some prank job, it’s real footage from the set, unleashed for 2017 and fit into a reflective outline about Carrey’s struggles with fame, creativity, artistry, and how he wanted to parallel Kaufman’s own absurdism.

Danny DeVito bemuses, “he’s exactly like Andy.” Warts and all, apparently. Carrey was difficult, showing up in a red Pontiac convertible and denting it in a backlot. He screams in character, as Kaufman’s Latka, that he wants more takes. And as Tony Clifton, when Carrey’s told the movie is taking a sound check, Clifton starts blah-blah’ing and warbling while hitting on extras. Riding the line between amusing and off-putting, the process is fascinating, and even Carrey seems thrown at times when looking back. If Jim & Andy sounds like the Inception of performance, fear not; it’s a little easier to follow than it sounds. It’s just that Carrey’s whims and dime-turn choices baffle the production, because they didn’t realize how frustratingly he’d commit.

The best excuse and logic Carrey offers up? “I have a Hyde inside me that shows up, when there are people, watching, you know? When there’s a thousand people, with their eyes on me, and they hand me a microphone, Jim goes away. And Hyde comes out. You know, but it’s a good Hyde! It’s not a hateful Hyde. It’s a loving Hyde, that just wants everybody to party and have a good time. But it’s a Hyde, nonetheless. And sometimes, afterwards, I feel like, ‘damn, I lost control again!’ To him.”

It’s fascinating when Smith chronicles Carrey’s stunt in tandem with gags he tested on late night shows, like pretending to be drunk on Arsenio and calling the host a “black bastard,” then passing out – or becoming the drunk uncle on In Living Color modeled after his grandfather. Some of it is impressive, and you want to reluctantly applaud Carrey’s wormhole of characters. Some of this stuff makes him look mean, or like a failure of performative acting. It’s hard to put a stamp on it.

Jim & Andy is hard to recommend, or to not. How about this? If you’re a Carrey enthusiast (like me and many others), the video vault alone is worth a watch, and at points, the film might be a pinnacle of creative genius, the struggle with fame, and how performers must mediate their onscreen lives with their real ones. If your patience for Carrey ran out in 1994, or at any time since then (and it has for many), the footage may come across like a cruel prank, and the doc’s approach like an act of half-hearted mea culpa for selfish acts only coming to light as a star’s career has finally begun to simmer. All righty then.