Denzel Washington excels in an uneven, yet compelling, legal drama and character study 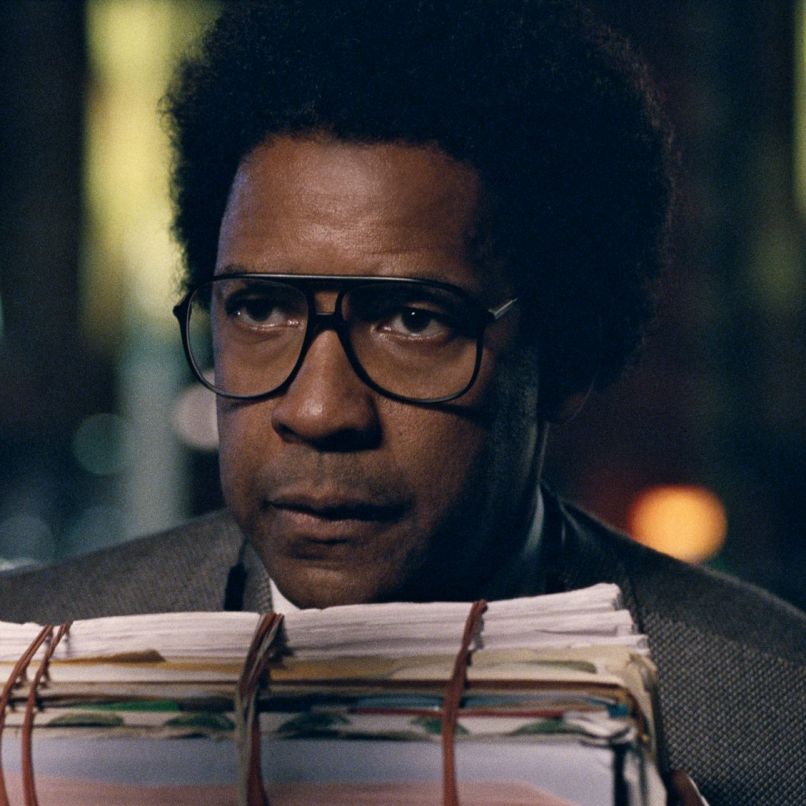 Roman J. Israel (Denzel Washington) has no true home in the world, a fact made clear from the earliest scenes of Roman J. Israel, Esq. forward. He’s an essential but nevertheless marginal player at the firm where he practices, a behind-the-scenes genius who doesn’t present well enough in public to try the major cases. He’s a onetime cornerstone of the black power movement who finds himself increasingly adrift in the midst of changing, ever-shifting cultural dialogues about race and gender and intersectionality. He’s a seemingly decent man in a world of sharks at large, who returns home each night to his apartment of decades, one being slowly nudged out of its own neighborhood by the increasingly luxe buildings next door. He belongs in no one room more than the next, but believes that he still should. That he deserves it.

The question of getting what one deserves, in a number of disparate senses, is central to Dan Gilroy‘s directorial follow-up to Nightcrawler. For a time, you may find yourself wondering why Gilroy would choose to follow that film’s aggressively dark satire with what on its face appears to be a fairly standard legal drama, with some offbeat character study worked in for color. But suffice it to say that Israel is of a pair with Gilroy’s debut, in theme if not in form, with its increasingly bleak perspective on what it is to spend one’s life toiling away for a cause, and how easy it can be to wonder if that cause was worth all the pain and strife. It’s also strikingly similar to Gilroy’s previous film, at points, in its meditation on a particular type of manhood. Roman may be a more concerned, thoughtful man than Jake Gyllenhaal’s dead-eyed ladder climber, but he’s every bit as obsessed with American manifest destiny, or at least his own understanding of what that may (and should) be.

His life is thrown into upheaval when the majority partner of his firm goes into a coma, unlikely to awaken. And given that the firm has been operating at a loss for several years, Roman finds himself in the position of being let go from the only job he’s ever known, one around which he’s been building his life for years. A chance meeting with George Pierce (Colin Farrell), the head partner of a dominant downtown firm, offers Roman work, in a similar capacity to his sausage-making career up to that point. George recognizes that Roman is more intelligent than much of the firm’s staff, but Roman’s many idiosyncrasies and generally inaccessible manner leave him unable to deliver the kind of performative grandstanding required of a high-powered lawyer.

In these early scenes, Gilroy unsubtly illustrates the ways in which Roman’s soul is at stake. He crosses paths with Maya (Carmen Ejogo), a younger revolutionary who’s continued to struggle with activism in the face of a changing, rapidly gentrifying Los Angeles. Another employee within the office questions Roman’s brusquely direct manner, and Maya admonishes him that “you stand on his shoulders,” with respect to Roman’s past work. That Gilroy never directly shades in Roman’s onetime accomplishments, instead leaving them to interpretations and Washington’s sorrowful gazes at old photographs throughout the film, is just one of the ways in which Israel introduces a curious, thoughtful point before discarding it to move on to another motif. It’s a frustrating structure for an often engaging film, one that cuts the stakes out from underneath the storytelling as the film moves along.

Much of Israel plays out the duality between Roman’s cushy new office lifestyle (where he fraternizes with dopey junior partners and ruthless executives) and the ongoing clarion call of his old, more anguished lifestyle. At one point, Maya invites Roman in for a seminar on what radical activists can and should do once arrested, and he demands to know why a pair of young women are standing up for the lecture. They observe, first politely and firmer thereafter, that he’s being condescending and sexist. He firmly insists in reply that he’s simply being polite, even as he’s unwilling to hear any further arguments against his own self-determined way of living. Gilroy makes the suspect call to frame the scene as an affront against Roman’s character, rather than against his stubborn traditionalism, and it’s one of a few instances in which Israel as a film seems to be at odds with its own logic and sense of purpose. At times Roman is a firebrand; at others, a woefully mortal man seduced by the easy trappings of privilege.

That duality may be inconsistent throughout Gilroy’s screenplay, one which meanders through a number of episodes to varied degrees of success. But it emerges best in Washington’s performance, one of his more interesting in recent years. Where there’s always a certain degree of confidence to even some of the actor’s most vulnerable characterizations, Roman is a nervous being, a man who knows the law to the letter but has made it the absolute center of his identity. Without it, or at least without a familiar place to practice it in a context he knows and understands, he’s left to the endless curiosities of the world, from wealth to sin to the fear that usually emerges as a result of chasing the former and engaging in the latter. Washington portrays him as a genius without purpose, a man who could be known as the smartest guy in the room if only he wanted to be, and if other people could see it. Yet he also palpably conveys the weight of battling for years against the status quo, and the psychologically draining effect that doing so can have on the human spirit.

Washington draws these traits out better than the film around him, one which deals in gravity and cliche at equal lengths to a frustrating degree. As Roman begins to develop a taste for a different sort of lifestyle, and one that hardly fits with the life he’s built to this point, Gilroy finds a quiet tension even as the film’s many different threads largely cease to fit together any longer. It’s a legal drama, until it’s a tense study of male hubris, until it’s a tragedy about the death of American political revolution, until it’s a terse melodrama. Gilroy never fully synthesizes these stylistic choices, and it leaves the film with a ramshackle quality that at once reflects the inner turmoil of its titular protagonist and dulls the film’s overall dramatic impact. There’s a sharp meditation on law and revolution within Israel, but it never fully surfaces, and it leaves a general impression of disappointment after a time.

Yet there are details at work here that cut through the noise of so much wheel-spinning. It’s in Washington’s frustrated stay in a Santa Monica hotel, overlooking the ocean, allowing himself to consider if the lifestyle he fought for decades to eschew might not be a better way of living after all. It’s in the film’s final image, which Gilroy sustains over much of the end credits, suggesting the endless cycle of uprising and bureaucratic slog. Roman J. Israel, Esq. is sometimes a compelling movie and often a difficult one to keep with, but it’s a flawed challenge that you’ll be grateful you gave a chance all the same.