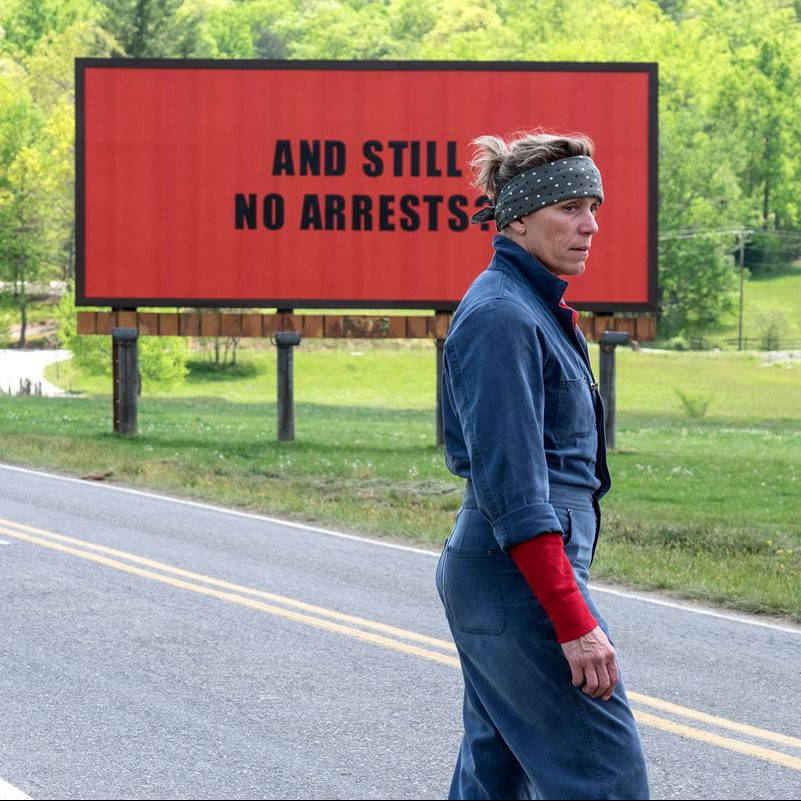 Rage isn’t a destination, so much as an endless tunnel. When wronged, the natural instinct is to seek retribution in return, but that’s so often impossible, for any number of reasons. So all of that need to make sense of the patently unreasonable finds its home within yourself, spiraling outward in every personal interaction and in the way you see the world. You enter a void from which you vaguely hope you can return, knowing that you might not. And that you might not even want to. At any rate, it’s easier than simply accepting that the world around you is vicious and unjust, that unspeakable things happen to good people for no reason and the evils of the world often win out by luck or happenstance or whatever have you.

Three Billboards Outside Ebbing, Missouri is a frequently staggering treatise on these themes, as seen through Mildred Hayes (Frances McDormand) and her dogged attempts to bring closure to the violent death of her daughter Angela. The better part of a year earlier, Angela was found dead on the outskirts of Ebbing, the victim of a ghastly crime that saw her raped, lit ablaze, and left to die. Yet the trail has gone cold, because of a lack of DNA evidence and, as Mildred sees it, because of the local police force’s overly lackadaisical attitude about their jobs and the solving of Angela’s case alike. To return the case to the front of the town’s mind, Mildred goes to the local advertising company, run by the sharp but slow-talking Red (Caleb Landry Jones), and rents out enough space for three billboards on the edge of town. They read:

Raped while dying
And still no arrests?
How come, Chief Willoughby?

For his part, Willoughby (Woody Harrelson) responds with a predictably disappointing moral appeal to Mildred’s better nature. He finds the billboards unfair, and says that he and his officers are doing everything in their power to catch Angela’s killer. Yet there are still no leads, and Mildred has to suffer Willoughby’s attempts to save face while simultaneously watching as officers like Dixon (Sam Rockwell) trawl through town, slurrily threatening Mildred in bars and reading comic books at work. Dixon may be a particularly egregious example, a walking caricature of an emotionally stunted racist cop, but he’s endemic of a larger problem in Ebbing. Too many people have simply accepted Angela’s tragic death as something that happens, something from which the town can and should move on.

But Mildred can’t. Neither can her son Robbie (Lucas Hedges), who has to live with the entire town reminding him on a daily basis of the worst thing that’s ever happened in his young life. If the billboards were a cannonball into the waters of autonomous justice, than what follows throughout the rest of Three Billboards is the tsunami that Mildred’s painful expression of rage creates. Soon the townspeople are speaking out against her interruption of their polite Southern idyll. The police are outraged that their dubious skills are being called into question so publicly. Willoughby has to cope with his own overwhelming burdens and assure his wife Anne (Abbie Cornish) that things will work out for the best in the end. And through it, Mildred has to continue to survive, to deal with Angela’s constant absence and the nagging suspicion that even the billboards won’t be enough.

Martin McDonagh, as a playwright and filmmaker, has often played with the ways in which small communities or enclosed cultures develop their own shorthands and dramas and senses of humor. Here, he uses the fraught American South as a background in ways both ingenious and occasionally suspect. Dixon’s history of racial abuse of power is, as so many other things in Three Billboards are, played for pathos and gallows humor alike in a manner that could be read as flippant, to a point. To use Missouri, of all places, as a backdrop is to invoke so much violent, ugly reality, both in recent years and older alike, and McDonagh’s interpretation will very likely bother as many as it attracts. But this is by design, at any rate, the writer-director playing on the cloistered rituals of small-town life in barbed fashion. These are the places where an Angela Hayes could meet such a savage end, and yet life will simply go on. And it’s only in Mildred’s relentless emotional aggression that the hope of salvation might emerge.

In Mildred, McDormand delivers what may well be her finest performance to date in a career flush with them. Like so many other characters in Three Billboards, McDonagh stops well shy of deifying her, instead lending her a richness of character that McDormand realizes with vivid, overwhelming power. Mildred is caustic and something of a drunk, a woman who’s been forced into such an unimaginable situation that she copes by careening through life with little regard for the fragility of others’ feelings about her or the things she’s been forced to endure. In one moment, Mildred admonishes a “well-meaning” priest who calls on her to request the retraction of the billboards with an uproarious analogy comparing the Catholic Church to Los Angeles’ gang crackdown of the ’90s; in the next, she’s making conversation with a lone doe about whether the world is cruel and there’s no afterlife. Staring down what she gently hopes could be her daughter, reincarnated, McDormand deadpans that “You’re pretty, but you ain’t her.” There’s pain and anger and brutal comedy, often all at once, in every corner of her performance, and it’s the kind that will endure over time.

McDonagh lends this moral complexity to all of his characters, from Mildred to the more marginal players, whether it’s John Hawkes as her abusive ex-husband or Peter Dinklage as a local with eyes for Mildred. If not all of the players generate empathy, necessarily, than they certainly get their moments as people, flawed and vulnerable and mean and funny as all people so often are. Willoughby may be more than a bit of a blowhard, but when he and Mildred share a moment of mutual, mortal terror, the emotion is genuine on both ends. Mildred may be in the moral right in what she’s doing, but her endless tenacity is challenged throughout. And even Dixon, as disreputable a type as they come, is given a rich humanity, as an idiot who more than likely shouldn’t have his job but still has the ability to change, and to heal. If the god hovering over Ebbing is a cruel one turning a blind eye to true evil, then McDonagh is its benevolent counterpart, who sees the idiosyncrasies and viciousness of people in all their messy splendor.

Three Billboards may be a film chiefly concerned with rage, and pain, but it’s also one of the best dark comedies of recent vintage, and one of the better dramas as well. While some of McDonagh’s narrative threads do time out in unexpected and even unresolved ways, the film’s highs are exemplary. It’s an exploration of what happens when a person has to face an event for which there is no guideline, and the lengths to which we all go to make sense of unnamed chaos. It may not offer answers, but it offers hope in its bleakly comic, often devastating way. This world may be bereft of faith and light and peace, but at least there are still a handful of Mildreds out there, willing decency back to the whole godforsaken Earth.