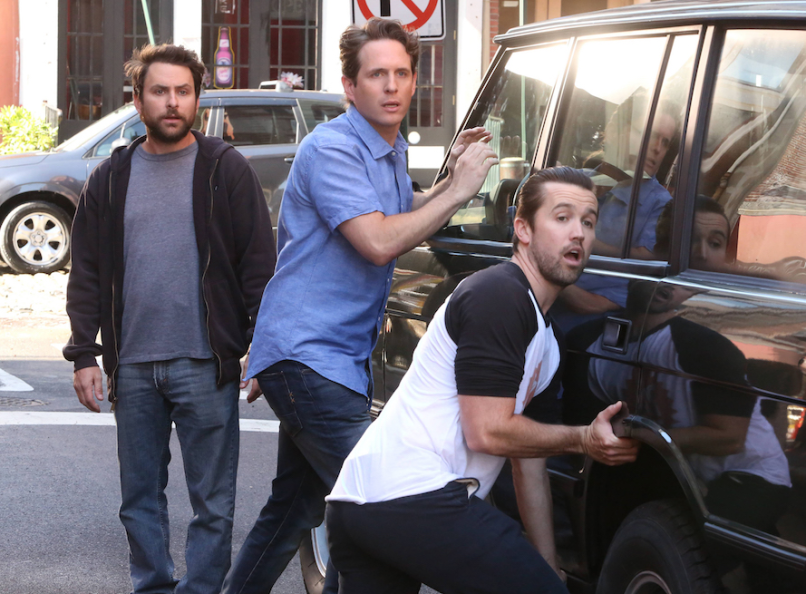 The Season 12 finale of It’s Always Sunny in Philadelphia left the gang down a man as Glenn Howerton’s Dennis departed to (spoiler) be a father to his bastard child. FXX has its hooks into the show for at least another two seasons, and it looks like Charlie, Mac, Dee, and Frank will indeed continue on without their psychotic leader.

During a panel at Los Angeles’ Vulture Festival on Sunday, Rob McElhenney (Mac) said production is aiming for an April start, with an eye on a fall 2018 premiere date. “We’re getting back to the writers’ room in February,” he said. When it came time to address the fate of Dennis, everyone was a little more tightlipped.

“Eh, damn it,” said Howerton. “I will say this: All joking aside, I love these guys and we have an absolute blast working together. We’ll see.”

Beyond his character relocating to North Dakota, Howerton is attached to a new NBC pilot called AP Bio. No doubt if that show were to be picked up for a season order, it would further complicate his involvement in Sunny.

Back in the summer, Charlie Day expressed a desire to keep Dennis a member of the gang, even if it’s in a limited capacity. “I imagine we’ve not seen the last of Dennis Reynolds,” he told The Huffington Post. “There is a possibility that maybe we would have Dennis in part of a season, not a complete season. I think we would still do a great season. There is a possibility that we have Dennis for an entire season, which would be fantastic.”

If you missed the most recent season or any of the older ones, you’ll want to make sure you’re signed up for Hulu. The show recently parted ways with Netflix and is exclusively available on the competing streaming service.