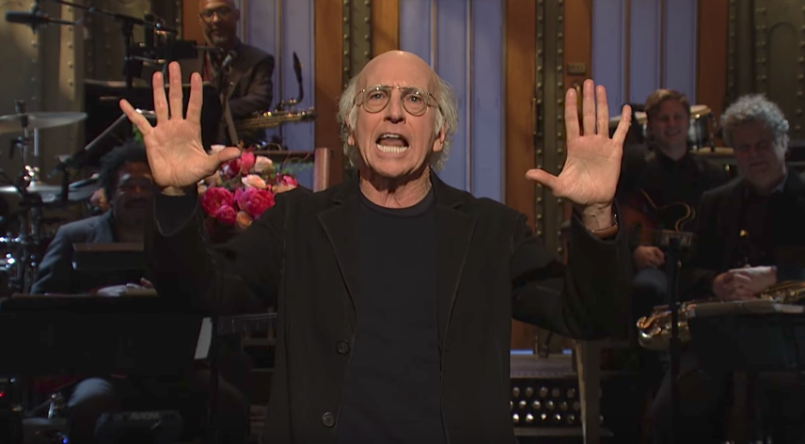 Just like the fictionalized version of himself that he plays on Curb Your Enthusiasm, Larry David can sometimes make his internal monologue external in rather indelicate ways. Such was the case with his opening monologue on this weekend’s Saturday Night Live, during which he delivered some Jewish humor that angered the international advocacy group the Anti-Defamation League.

David’s monologue featured the Seinfeld co-creator expressing his dismay that many of the celebrities caught up in sexual misconduct and harassment scandals happen to be Jewish. “I don’t like it when Jews are in the news for notorious reasons,” David said, continuing, “I know I consistently strive to be a good Jewish representative. When people see me, I want them to say, ‘Oh, there goes a fine Jew.’”

However, he then took a dark shift by wondering about what a Jewish lady’s man like himself would do in a World War II concentration camp. Here’s what he said:

“I’ve always been obsessed with women and often wondered, if I’d grown up in Poland when Hitler came to power, and was sent to a concentration camp, would I still be checking out women in the camp? I think I would. ‘Hey Shlomo, look at the one by barracks 8. Oh my God, is she gorgeous?! I’ve had my eye on her for week! I’d like to go up and say something to her.’ Of course, the problem is there are no good opening lines in a concentration camp: ‘How’s it going? They treating you OK? You know, if we ever get out of here, I’d like to take you out for some latkes.'”

Jonathan Greenblatt, CEO of the ADL, was unamused by the jest, and called David out on Twitter. “He managed to be offensive, insensitive & unfunny all at same time,” wrote Greenblatt. “Quite a feat.”

Watched #LarryDavid #SNL monologue this AM. He managed to be offensive, insensitive & unfunny all at same time. Quite a feat.

Greenblatt wasn’t alone, either, as plenty on Twitter expressed discomfort with David’s train of thought. Of course, there were also those who defended him; humor can be relative, after all, and as George Carlin said, “It’s the duty of the comedian to find out where the line is drawn and cross it deliberately.” That’s essentially been David’s M.O. since the early days of Curb, so perhaps we shouldn’t be surprised when he brings it to the SNL stage.