Neil Young + Promise of the Real – The Visitor

The Canadian troubadour reminds us that America has always been great 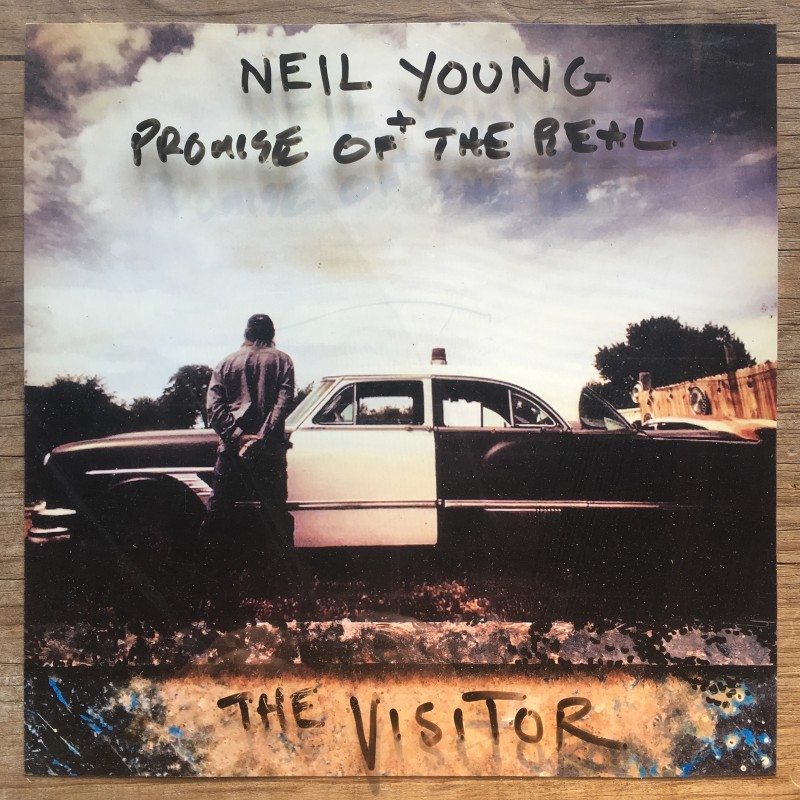 When you take into account that he’s lived about 50 of his 72 years on US soil, it’s not that odd for people to think of Neil Young as a natural-born American citizen. But in the opening line to his second full-length with Texas country rockers Promise of the Real, he doesn’t waste any time reminding people where he’s from originally.

It’s not only a reminder of his ancestral roots for the rest of us, but most notably for the current president of these United States, Mr. Donald Trump, whom in the past has considered himself a fan of Neil Young as well as an acquaintance (though the two sparred in 2016 over then-Candidate Trump’s use of “Rockin’ in the Free World” on the campaign trail). Chances are incredibly strong however that the Orange One did, in fact, convince himself the Ragged Glory rocker was born on this particular slab of our continent. And in the instances where the two men did cross paths, one can easily imagine Trump shaking Young’s hand in that weird way he does as he hissed, “You’re a great American.”  But rectifying that common misnomer is only a mere few seconds in a song that spans nearly six minutes, the majority of which is spent correcting Mr. Trump’s common assertion that he wants to make America great again. It’s one of the best songs Young’s crafted in the studio with guitarists Lukas and Micah Nelson, bassist Corey McCormick, drummer Anthony Logerfo, and percussionist Tato Melgar, who are slowly but surely growing to become as fitting a backing band for the 72-year-old as Crazy Horse has been for nearly half a century.

From there, though, The Visitor hits a bit of the same creative turbulence the good majority of Young’s recorded output has suffered these last two decades (albeit with the exception of such straight-up classics as Silver & Gold, Prairie Wind, and Le Noise).  If you go back and relisten to all of the so-so albums he’s released since 2000 — Are You Passionate?, Chrome Dreams II, Fork in the Road, Americana, Storytone, etc. — you may notice certain creative crutches Young tends to lean on when he’s not feeling 100 percent inspired to give it his all. And on The Visitor, he falls into one of his most unfortunate ruts doing that sing-songy protest jingle shit that made records like Greendale and Living with War so darn unlistenable. But the good news is there are only two songs like this on here: “Stand Tall” and “Children of Destiny”. Skip both and thank me later.

However, the remaining eight tracks on The Visitor rank up there with the best stuff Neil Young has released since the turn of the century. There’s a song like “Almost Always”, which is reminiscent of the plaintive nature of his finest political LP, 1980’s Republican-leaning Hawks & Doves, albeit with a little lick nipped from the opening chords to “Unknown Legend”. The 10-minute closing number, “Forever”, sounds like it could have been an atmospheric leftover from the Sleeps with Angels era. On “Fly by Night Deal”, a busted toy piano and what sounds like distorted harmonica punctuate a groove not unlike the kind Pearl Jam laid down on Mirror Ball as Uncle Neil extrapolates upon the grievances he established on last year’s excellent Peace Trail about the Keystone pipeline. Meanwhile, one of the record’s finest cuts is “Carnival”, which finds Young cackling his way through visions of barkers on the midway and Evel Knievel’s great-grandfather as he contemplates “too much time spent in the tent of the strange elephant of enlightenment” over a Latino rock shuffle his old pal Carlos Santana might mistake as one of his own. My personal favorite cut on The Visitor is “When Bad Got Good”, where the singer turns the infamous “Lock her up” chant so ubiquitous at Trump’s campaign rallies on the “Liar in Chief” as he puts it while the band strikes up a swamp stomp boogie for the ages.

Recorded at Rick Rubin’s Malibu studio Shangri La, The Visitor is a huge step up from the endearing but misguided The Monsanto Years, as if the experiences Willie’s boys have enjoyed performing such serious Neil Young chestnuts as “Human Highway”, “Long May You Run”, and “Vampire Blues” these last couple of years have really seeped into the fabric of their creative beings. It will be truly astounding to see what this exciting combination has in store for us now that Old Neil’s hopefully gotten all the protesting out of his system, at least for the moment. Just don’t forget where he comes from.