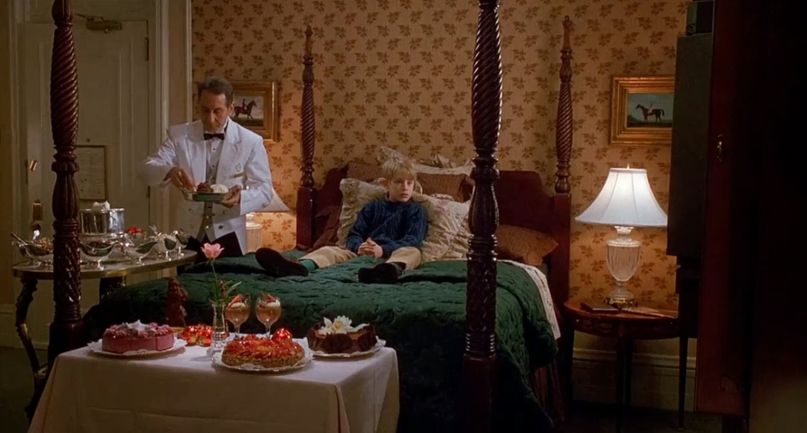 In the 1992 sorta-classic Home Alone 2, little Kevin McCallister commits multiple instances of identity and financial fraud while at New York City’s luxurious Plaza Hotel. Now, in honor of the film’s 25-year anniversary, that very same hotel is giving (rich) fans of the movie an opportunity to do the same.

The Home Alone 2 Anniversary Room Package enhances your stay at the hotel with extras that include a branded Home Alone 2 backpack, an “over-the-top ice cream sundae,” and a paint can (remember, Kevin uses a paint can to give Daniel Stern brain damage in the first film) filled with Home Alone DVDs and Blu-ray discs. No Fruit Stripe? Denied!

There are other add-ons, though, including express passes to the top of the Empire State Building and a four-hour limousine tour that better include a piping hot cheese pizza. Rates begin at $895, so you’ll have to be as rich as Peter McCallister to get a room.

(Read: Hughes for the Holidays: The Seasonal Trips of John Hughes)

The Home Alone 2 theme is extending to other areas of the hotel as well. Pop over to the Todd English Food Hall and you’ll find gourmet spins on the trash food of the ’90s, including “Charcuterie Lunchables” and SpaghettiOs. There will also be cocktails inspired by Sunny D and Zima, which sounds like the worst idea anyone’s ever had.

Well, hey, at least the Plaza didn’t include Donald Trump in its branding. Lest we forget (we’ll never forget), our current president has a cameo in the movie. Watch it below, and feel your heart yearn for a more innocent time.