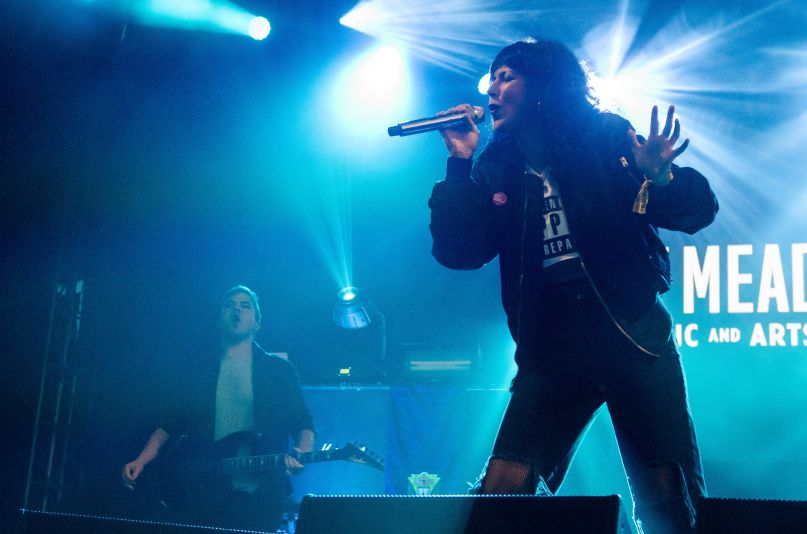 Noise pop duo Sleigh Bells recently announced that they plan on bucking the traditional album cycle by putting out smaller releases “at a more consistent rate.” That approach begins today, with the release of Kid Kruschev, which subscribers of Spotify and Apple Music can now stream below.

The follow-up to last year’s Jessica Rabbit, the 7-track effort marks vocalist Alexis Krauss’ first since moving from Brooklyn to upstate New York. In a press release, she and collaborator Derek Miller say the mini album finds them “embracing both the personal and world-scale anxiety of the moment.” That much is evident in previously heard singles “And Saints Stream” and “Rainmaker”, both of which share a trembling, shadowy quality.

Krauss talked about the impact of the current cultural state of America in an interview with Westword from earlier this year. “I think our songs tend to be more personal, but obviously, personal experiences tend to be tremendously influenced by the outside world right now,” she said. “Personal turmoil is also kind of reflecting that public turmoil, and you can’t really draw a line between them, in my opinion. We’re just trying to be as honest and vulnerable and insightful as possible with our music. But I don’t think we’re going to set our course one way or the other. It’s really about what comes out and what feels right.”