Sturgill Simpson busks outside the CMA Awards to benefit the ACLU: Watch 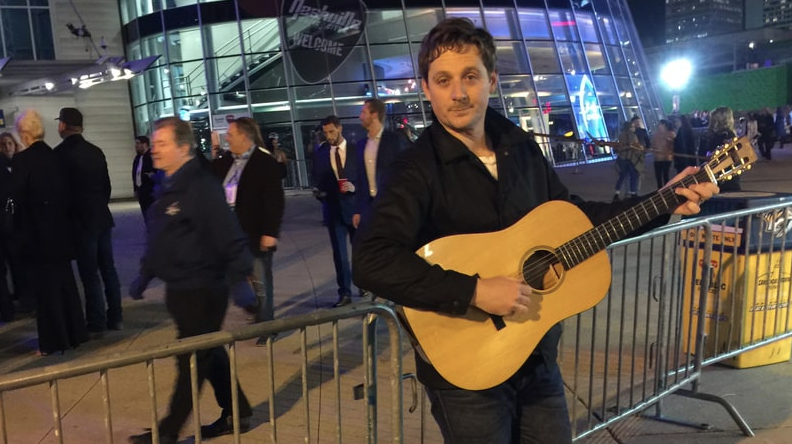 Sturgill Simpson has won four Americana Music Awards trophies and took home this year’s Best Country Album Grammy for A Sailor’s Guide to Earth, yet somehow he’s never been nominated for a single CMA Award. He still showed up to last night’s ceremony, however, even if he wasn’t invited inside the Nashville’s Bridgestone Arena. Instead, he set up post outside the venue with his guitar and a Facebook Live feed to busk and take questions from fans.

With his Grammy in his guitar case, Simpson set up a pair of signs that read, “I don’t take requests, but I take questions about anything you want to talk about … because fascism sucks,” and, “Struggling country singer… Anything helps (all donations go to the ACLU). God Bless America.” By the end of the night, he’d apparently made $13 for the ACLU performing songs like “Turtles All the Way Down” and “Water in a Well”.

(Read: The Winners and Losers of the 2017 Grammys)

He also took plenty of questions from passerbys and the over 79,000 fans who were watching him online. He talked about how he didn’t even submit for the CMAs (“I wouldn’t say I was snubbed”), staying “weird” as an artist (“I’ll never make a record watered down enough to go mainstream”), and what music he’s been listening to (ELO, La Roux, Run the Jewels, and Angel Olsen, whom he says is “a badass”). He also gave a number of shoutouts to Jason Isbell, an independent country artist whose The Nashville Sound was up for Album of the Year (and lost to Chris Stapleton’s From a Room: Volume 1).

Simpson did get political beyond his signs, as well. When asked at one point about Trump, he said plainly, “He’s a fascist fucking pig and I’m not afraid to say that.”

There were also some hints about his future music goals, including a bluegrass album, the next entry in his five-record plan being “about life and sin and we’re literally going to hell,” and his festival-heavy tour schedule for 2018 and 2019. Check out the whole 48-minute thing via the video below.

Previous Story
Neil Young and DRAM’s collaborative song exists, to be released on soundtrack to Will Smith’s Bright
Next Story
Marilyn Manson still won’t say whether or not he removed a rib in order to suck his own dick
Popular
More Stories
[fu-upload-form form_layout="media" title="Submit Your Photo"][input type="hidden" name="ugc" value="1"][/fu-upload-form]