The Southern Way: How UGK’s Too Hard to Swallow Changed Hip-Hop Forever 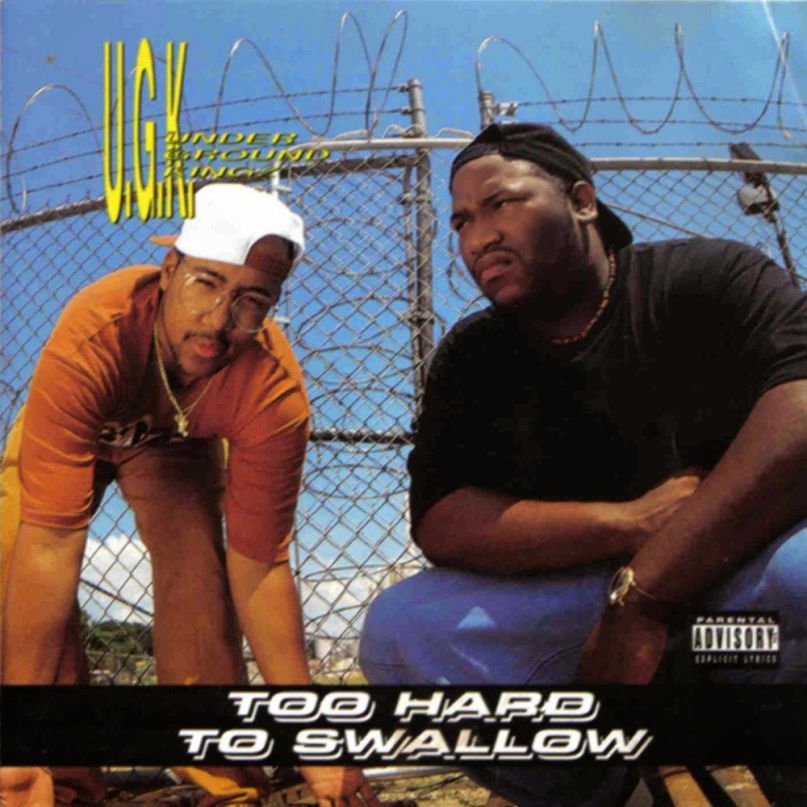 Before Pimp C’s tragic death and Bun B’s transformation into a universally beloved elder statesman and ambassador for hip-hop, UGK was a innovative young duo from the then unknown oil refinery town of Port Arthur, Texas. The state was just beginning to come into prominence as a breeding ground for hip-hop talent in 1991 on the shoulders of the Geto Boys, their hit single “Mind Playing Tricks on Me”, and their charismatic and tortured frontman, Scarface. Then UGK’s major-label debut, Too Hard to Swallow, came out a year later and changed everything.

Picture a young drug dealer, fearless and brazen, in a sparse kitchen. He turns a knob, and blue flames emerge from the gas stove top, only to be smothered by a cold, gray pot filled with water. The water boils, and a smudged glass jar is submerged, a white powder coating the bottom, which through some feat of chemistry transforms from powder, to oil, to hardened rock.

This scene was played out in vivid detail by the lead character, Caine, in the 1992 Hughes Brothers film Menace II Society, which featured the Too Hard to Swallow standout “Pocket Full of Stones (Pimp C’s Remix)” on the soundtrack. But it also played out in real life in the early 1990s in big cities on the east and west coasts as well as in smaller towns and working-class communities in the south. The crack era, and the destruction it wrought, was the inspiration for Too Hard to Swallow. The raw and unfiltered realism from Pimp and Bun positioned both rappers as active participants and unwitting victims of this poisonous trade.

With a majority of the songs culled from their 1988 debut EP, The Southern Way, Too Hard To Swallow doesn’t display the same level of polish we would hear from UGK on later albums like Supertight and the classic Ridin’ Dirty. Pimp C’s production is stripped down, dragging easily recognizable samples like The Isley Brothers’ “Between the Sheets” — which was later used for The Notorious B.I.G.’s “Big Poppa” and hit singles from the likes of Bill Withers, The Steve Miller Band, and Rufus — through the Port Arthur dirt to create something previously unheard.

Pimp and Bun spun lurid tales with the wizened demeanor of street veterans and impish mischievousness of the stars of a Judd Apatow teen comedy. Throughout the album, we hear more about the dicks of the influential duo than we would, thankfully, ever hear again throughout their respected careers, but we also hear the still-teenage rappers carve out their unique place in hip-hop and in their own region on songs like “Short Texas.”

The aggression on the aforementioned track is turned up to a roiling boil compared to the low simmer of “Something Good”. Featuring another Isleys sample (this time “Summer Breeze”), both rappers alternate between thumbing their noses at fake gangsters and taunting the sexually unsatisfied paramours of their would-be enemies. “Something Good”, and a handful of additional songs, show the most restraint and promise, while giving glimpses of the greatness that would ensue from both rappers on subsequent albums.

The album climaxes on the Pimp C solo outing “Feel Like I’m the One Who’s Doing Dope”. Pimp channels the same hysteria and delusions that tormented Scarface on “Mind Playing Tricks on Me”, which is not coincidentally sampled for the hook. Unhinged and paranoid, Pimp blows a kiss after he kills his girlfriend, who he thinks may have stolen his drugs from him though he’s unsure if he hasn’t just used them himself. The song taps into the juxtaposition Jay-Z elaborated on years later on his Black Album favorite “Allure”, comparing the draw of the streets and the adrenaline rush from tempting fate each day, to addicts jonesing and returning to the drugs that will eventually kill them.

Too Hard to Swallow was a groundbreaking beginning to UGK’s legendary career. Their influence would extend throughout the country like the interstate drug trade, creating addicts and purveyors of the same dope in big southern metropolises like the Dungeon Family in Atlanta, small southern hamlets like Big K.R.I.T. in Meridian, MS, and even crawling up the east coast to hook the likes of the aforementioned Jay-Z and Harlem’s A$AP Rocky. UGK’s influence is undeniable, and it began 25 years ago in Short Texas with “Too Hard to Swallow”.

Rest in peace to Pimp C, and undying respect to Bun B for creating a sound that altered the course of hip-hop history.