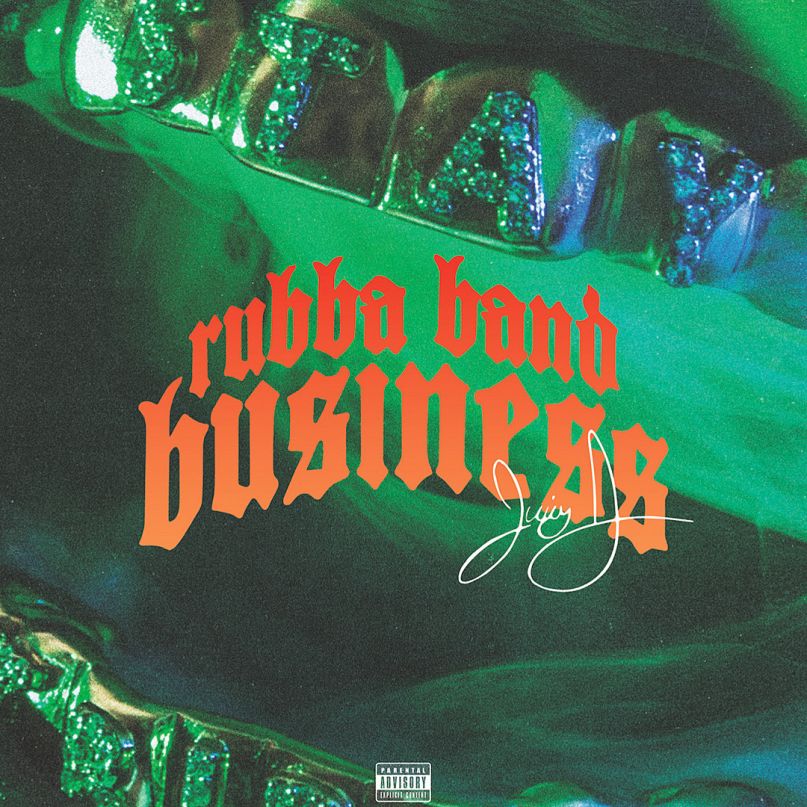 Three 6 Mafia co-founder and seasoned rap veteran Juicy J has certainly gone through some stylistic changes throughout his 25-year career. After 18 years with Three 6, he took to the collaborative art of mixtape-making and started working with Wiz Khalifa on his Taylor Gang imprint. But the lo-fi lifestyle didn’t last. In 2013, the Southern hip-hop forebearer transitioned into poppier territory with Stay Trippy, an album that blew up on a larger scale. From there, Juicy J continued to release more radio hits with hot names like Katy Perry and Nicki Minaj. But his latest studio album, Rubba Band Business, harks to mixtapes past, drawing its name and style cues from his popular 2010 and 2011 mixtapes, Rubba Band Business and Rubba Band Business 2. In September, Highly Intoxicated was released on the free online mixtape platform Datpiff, establishing Juicy J’s return to the medium. Packed with features from rap royalty and promising newcomers, club-friendly bangers, trap rap, ego grooming, and casual misogyny, it was classic Juicy J. His new album, Rubba Band Business, is, unfortunately, more of the same.

The first thing you hear is a signature Trap-a-holics soundbite (“Trap-a-holics biytach”), effectively teeing up the mixtape vibe. (If you’re unfamiliar, Trap-a-holics has been hosting and DJing mixtapes since 2007. You may have heard his other soundbite, “Damn son, where’d ya find this?”) On the opening skit, “Back on the Porch”, two men muse about Juicy J’s whereabouts over a couple beers. They say he “went Hollywood,” something Juicy J is clearly trying to disprove with the album that follows.

Starting off the mediocre tracklist is the Metro Boomin-produced “Feed the Streets”. A menacing violin-based sample backs Juicy J’s typical flow and accompanying verses from A$AP Rocky and Juicy J’s older brother, Project Pat. As is the case with a lot of Juicy J’s music, the lyrics are nothing to write home about, but the instrumentation makes their words ring with a triumphant sadness. Juicy J uses this track as a preface meant to reassert himself and give listeners a recap, recounting life on the streets to a vintage-sounding beat. Now that he’s reintroduced himself, the next three songs aim to situate the audience … 10 pegs below him.

An ominous tone persists in “A Couple” and “Buckets”, where Juicy J brags about the women he’s slept with and drugs he’s done, and “Dodgin’ the Snakes” boasts his rap elder status and calls out his haters. These anticlimactic flops speak to the album’s mixtape theme in their sheer skippability, resonating like weak supports for his I’m-still-here thesis. But Juicy J’s utter disregard for context is what really ruins it for him. There was a time when lyrics like “Slob on my knob like corn on the cob/ Check in with me, then do your job,” weren’t really questioned. Even in 2015, “These hoes/ They for everybody/ Pass them all around, they at every party” was okayed by the general public. In 2017, however, you’re less likely to get away with objectifying and degrading women in your music, especially if your music isn’t particularly good. The fifth song on the album, “Drop a Bag”, is overall a frightening listen. Juicy J’s signature chant, “Yeah Hoe,” punctuates violent threats; “I will blast on your ass … You a hoe, you know we know.” A truly misogynistic spoken-word bit closes the track, belittling “fake-ass hoes” on social media.

After this jarring song, Juicy J settles into a more updated sound with “Too Many”, featuring long-time collaborator Wiz Khalifa and rising rap star Denzel Curry. It’s fairly harmless, with a typical Wiz chorus about being crossfaded at its core, leading into the equally average “Ain’t Nothing”. The hit-making collaborators — Ty Dolla $ign and Mike WiLL Made-It — bring a subtle strength, but the album taps into an even sweeter spot with “Flood Watch” featuring Offset of Migos. Juicy J is at his best, rhyming around a nostalgic piano beat, brought into the present by Offset’s familiar flow. The stride is short lived, though, undercut by the absolute duds that follow. “Only One Up” and “Hot as Hell” find Juicy J where he started on the album, trying to prove himself with shameless braggadocio. Considering these colorless songs along with his other solo tracks on the album, it’s clear the man thrives in more collaborative settings. This is further substantiated by what comes next — “No English” featuring Travis Scott and “On & On” featuring Tory Lanez and Belly. They’re not great by any means, but they’re not totally awful either. They work for the current club rap landscape, with their Auto-Tune and sing-rapping, but there’s not much beyond that. “On & On” is an apt finale, summing up Juicy J’s knack for mixing unique sounds and features and his refusal to leave his “slob on my knob” ways in the past.

Essential Tracks: “Flood Watch”, “Feed the Streets”, and “Ain’t Nothing”