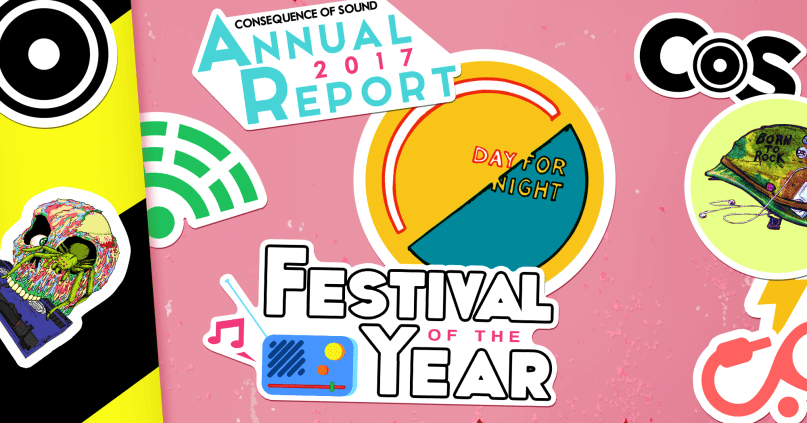 “Day for Night is a correction to the festival landscape.” These are the first words of festival co-founder Omar Afra when we speak. It’s a bold claim, but one that’s not without merit given his three-year pedigree of booking highly coveted acts like Aphex Twin, Björk, Thom Yorke, and St. Vincent — and to think, that’s just the music.

“We haven’t necessarily innovated as much as reintroduced visuality and exploration to the festival experience, and I think it’s long overdue, not just for festivals, but for the general concerts as well,” Afra says, leaning back in his chair, ironically unvexed for a man sporting a black shirt that reads “ANXIETY.” “To go and transform new spaces and environments as we’ve done with the [Barbara Jordan Post Office] has really stoked our interest to look at what’s possible elsewhere.”

For three nights in December, Day for Night transforms the husk of an abandoned Post Office building into two-million square feet of arresting sensory data. One moment you’re outside listening to En Vogue in the flesh; the next you’re pulsing to the chest-rattling, electronic glitch work of Ryoji Ikeda, only to be whisked upstairs to a giant labyrinth of experimental digital art.

Whereas most festivals commission a few gaudy sculptures to break up the monotony of their stage map and recycled lineups, Day for Night has created its own lane. Art Curator Alex Czetwertynski has his fingers deep in the contemporary digital art scene, and if the ambitious installations he commissions take a backseat, it’s simply because the lineups are so deep.

So, how does a cutting-edge 21st century digital art festival come to exist in Houston, Texas?

It was inevitable, according to Afra. A longtime resident of Houston — his family immigrated to the Texas metropolis when he was a toddler as a means of escaping the Lebanese Civil War — Afra has a strong connection to the area. In early 2003, he founded Free Press Houston in reaction to the Iraq War, and as the publication grew, Afra quickly parlayed his counter-cultural influence into support for the arts with his first festival, Free Press Summer Fest, in 2009.

Through the years, Free Press Summer Fest became hamstrung in ways that ultimately made it creatively exhausting, even if commercially viable. And so, in 2015, Afra and his team cashed out with a deal from Live Nation. The funds allowed him to assemble his dream team to make his ideal festival a reality.

“We’ve got a team of people who really, really, really care.” Afra is quick to credit his peers: “I’ve worked in several organizations, and, ultimately, the culture they create always determines how good their event is going to be, and we’re lucky to have a big team from all around the world who are of the same mind, people who just want to make something beautiful. We’re on this earth for a short time, and our team just collectively wants to be able to look each other in the eye and know that we didn’t compromise in the effort to create something truly unique.”

One member of that team is co-founder and Day for Night Creative Director Kiffer Keegan, of branding and design firm Work-Order. “We push the limits as far as we can in creating a unique experience for attendees– from the surfaces that come alive with projections, the lighting, stage design– no aspect of this event is unconsidered. The goal is to reach every single person in some way. If we haven’t, we’re not working hard enough,” says Keegan.

That ambition is Day for Night’s greatest strength and simultaneously its Achilles’ heel. After all, things didn’t exactly go as planned for its inaugural edition in December 2015. Taking place at a warehouse in Houston’s Silver Street Studios, a far stretch from the downtown area, disorganization was rampant, and a lack of visual assets made a murky idea an even harder one to sell. What’s worse, attendance was poor, despite a lineup boasting Kendrick Lamar, New Order, Flying Lotus, and Philip Glass, prompting many critics to question Houston’s vitality in the festival market.

Years later, that question continues to dog Afra, who remains steadfast that Houston is a viable market for a new breed of festival. In a recent interview with the Houston Arts Blog, he pointed to the city’s Montrose community as a prime example of unique topography, where exorbitant wealth co-exists with affordable housing, and the kind of collaborations that can result. He asks, “Why not Houston?” It’s a fair question given that it’s primed to be America’s third largest city.

Nevertheless, things didn’t exactly go to plan the following year, either. Although it was the first iteration to take place at the Barbara Jordan Post Office, the festival saw a whole slew of new complications, specifically flooding toilets, a visit from the fire marshall, and negative reviews from festivalgoers who indulged in the VIP offerings. Still, the ambitious power of the lineup, which featured an eclectic mix that ranged from Aphex Twin to Björk to The Jesus and Mary Chain to John Carpenter, remained a cause for elation. In other words, there would be a third year.

Which brings us to this year’s installment: Headlined by Nine Inch Nails, Thom Yorke, Solange, Justice, and St. Vincent, who all floated over one of the most impressive undercards of any festival in recent memory, Afra spared no expense on crafting 2017’s boldest lineup. Most impressive, however, was the festival’s pure existence in the devastating shadow of Hurricane Harvey.

As the festival carried on, metric tons of water were still being manually excavated from homes and building foundations throughout the Houston area. Even so, there wasn’t a moment of doubt from the Day for Night team.

“Houston got kicked in the teeth this year. There are still people who lost their homes, cars, and businesses and [have not gotten anything back],” Afra admits, before contending that “we feel like Houston is a big part of our DNA, and part of that DNA is getting knocked down and getting right back up. Ninety days ago, people were still stuck on their second floors. [Our hope] is that this underscores the resiliency of Houston to the rest of the country. Our whole team said to ourselves, ‘Some people are picking up the pieces, and they’ve got nothing left. How can we not put this festival on?’”

Though not without its share of lingering growing pains — be it drink shortages, sound and sightline issues at the indoor blue stage, or a few ill-communicated cancellations — this year’s Day for Night capitalized on its Houston-bred maturity to deliver a more streamlined footprint and some swift thinking. For instance, on Saturday night, the festival readily bumped up its set times to accommodate fans willing to brave the icy, cold rain for Nine Inch Nails as opposed to a washout. If anything, the punishing conditions enhanced what went on to be one of the weekend’s most impressive sets.

Experience is a calling card for Day for Night. From the get-go, the festival has welcomed a melting pot of the art world beau monde, archetypal fest-y types, hipster fashionistas, and passionate fans of the rare bookings Afra and his team have landed each year. Once they’re at the festival, however, these constructs dissipate in lieu of the sheer volume of sensory information the festival offers. The ambition and the awe it inspires winds up engulfing the audience in an experience that is completely singular.

In 2017, throughout the grounds there were several dozen projectors, 16 installations, and hundreds of hours of custom digital programming built into the stages. These works had patrons skipping sets from their favorite musicians just for another minute of pure imagination. The “Light” portion of Day for Night is so pervasive, for once it can be said with a straight face that a festival truly does blur the line between visual artist and musician, stage and performer. This is the goal of Day for Night, and all signs suggest that they’ve only just scratched the surface.

Art Curator Alex Czetwertynski says, “For us, the goal has always been to have a big name in music come to us and say, ‘We would like to perform our show inside of an installation that would be designed by one of [the commissioned artists].’ That’s the holy grail for us.”

It’s something the festival has merely flirted with thus far, incorporating Björk’s Virtual Reality experience in 2016 and having visual artists Ryoji Ikeda and Freeka Tet perform as musicians to complement their visual works for 2017. This year also saw a Yellow Stage in which artists performed in-the-round, encircled by large-tiled LED screens that displayed some of the most dynamic visual manipulations of the entire festival. One can only hope these experiments will expand in the years to come.

Bringing visual art to the traditionally uninitiated is often met with hostility, but Czetwertynski insists the response from the art world has been mostly positive.

“It’s about finding artwork that creates experiences that are not just eye candy, ones that will stay with you after the festival, engaging you in a way that is not just about entertainment, but that creates a connection with the artwork,” he says. “I walked the fest with many people who would be considered art professionals, and they appreciated the fact that we mixed both elements.”

It’s this balance that Day for Night will continue to strike, and throughout that battle, it will continue to ask its fans a few important questions with broad implications: Can niche art sustainably attract the kind of resources needed to bring ambitious projects to life? Who draws the line between art and what is simply entertainment? Where are the outer limits of what a festival can be?

For Czetwertynski, the magic lies in its transience. “To me, that is what makes Day for Night the most exceptional thing. We build these very complicated, ambitious art installations [and performances], and they’re up for two days, and then they’re gone. There’s no saying when you’ll be able to see them again.” In a world of light beer, VIP patios, and Ed Sheeran, it’s these fleeting experiences that need to be chased.

Previous Story
Album Review: Glassjaw Pays Homage to the Past and Warns the Present on Material Control
Next Story
Thom Yorke is still shitting on Spotify (even after making his music available on the platform)
Popular
More Stories
[fu-upload-form form_layout="media" title="Submit Your Photo"][input type="hidden" name="ugc" value="1"][/fu-upload-form]