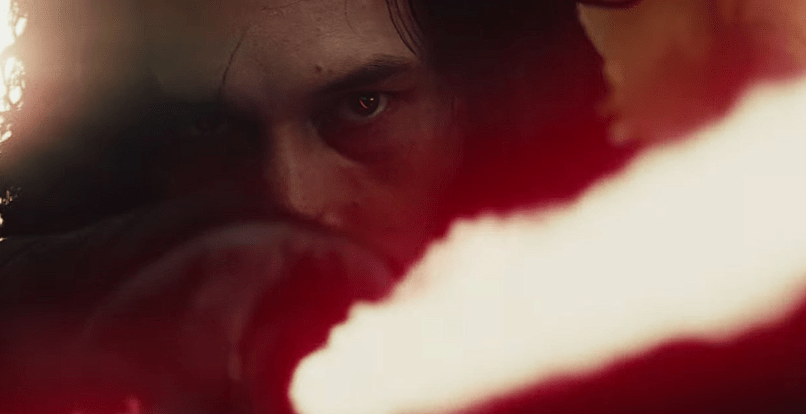 Very rarely is anything ever black or white. All too often in life there’s a gray area, where nuance opens the floor for tough decisions to be made, blurring the lines between right and wrong. For the most part, Star Wars has bucked that trend, striving to be a mythologized story about good and evil — or rather, the light and the dark side. But, that age-old tale becomes not only predictable, but repetitive, which is why the franchise hasn’t had a gasp-worthy narrative since 1980’s The Empire Strikes Back, when Luke Skywalker met his big, bad daddy. Now, three prequels, two sequels, and one anthology film later, the series finally has some ingenuity in the tank. Or, to paraphrase Poe Dameron (Oscar Isaac), “the spark that will light the fire that’ll burn the nostalgia down.”

Take off those rose-tinted lenses and you’ll see that nostalgia has been a major issue for this new era of Star Wars. It all started with 2015’s The Force Awakens, when J.J. Abrams decided to turn Episode VII into an ultra-safe reboot of the 1977 original, echoing the story beat for beat in an all-too-lazy attempt to “make things right,” as Max von Sydow cheekily states in the movie’s opening. He wasn’t wrong, per se: Despite the film’s gluttonous Remember Whens, both Abrams and Lawrence Kasdan happened to deliver a handful of lovable new characters in Poe, Finn (John Boyega), Rey (Daisy Ridley), and Kylo Ren (Adam Driver). Which is why it was so frustrating that they leaned so hard on familiarity, something that also plagued last year’s Rogue One: A Star Wars Story.

Looking back, though, Abrams was simply building the nu-retro IKEA table for Rian Johnson to play on with his own action figures and playsets. As both writer and director of Star Wars: The Last Jedi, the mastermind behind 2012’s Looper and 2005’s Brick is far less concerned with standing on ceremony than burning it all to ashes — sincerely. “Let the past die,” Kylo Ren states at one point. “Kill it, if you have to. That’s the only way to become what you are meant to be.” Hey, the little brat is not alone, sharing the same sentiments with the one and only Luke Skywalker, who tells Rey, “I only know one truth: It’s time for the Jedi … to end.” (By the way, those lines are both from the trailer, so let’s not go nuts, okay?) Everyone’s ready for New Coke in Johnson’s world.

(Listen: State of the Empire: A Star Wars Podcast)

Sure, there are a number of parallels to both The Empire Strikes Back and Return of the Jedi, what with the whole Jedi training bit, the narrow escapes from the Imperials, and pretty much everything involving Snoke, but they’re all in service of much grander change. Johnson is so clearly aching to break free from the shackles of nostalgia that it’s downright admirable — and yet also surprising. The amount of free reign that Disney gave this guy is astounding. Not since Irvin Kershner has a director been able to truly put his own stamp on a Star Wars film, and Johnson reaches for the stars both narratively and visually. Not all of it works — you know, like when a certain droid stupidly commandeers a certain Imperial walker — but it’s refreshing to know there’s at least some autonomy in a franchise that’s been fraught with committee-based filmmaking.

And how! Believe it or not, but The Last Jedi might be the most politically charged entry in the long-standing saga. Whether he’s lambasting the military industrial complex or biting his thumb at the one-percenters, Johnson never spares a moment to weld in some kind of choice commentary. Much of this is funneled into the narrative of Kelly Marie Tran’s new hero, Rose Tico, but really, his most powerful political sentiments are at the expense of our most sacred heroes. In a ballsy move, Johnson seemingly force chokes the entire baby-boomer generation for their past sins, namely how they’ve betrayed their morals and affected future generations in the long run. It’s a risky move that may piss off the more puritanical fan, but one that gives an unbelivably dark weight to the story.

Rest assured, there’s plenty of fun to be had elsewhere. You want more Poe? You got more Poe. You want characters floating in space? You’ll float, too. You want a bunch of critters both crazy and cute? You got crystal foxes and Porgs. You want veteran actors going H.A.M. in a galaxy far, far away? You got Laura Dern and Benicio del Toro having the time of their lives being glamorous and goofy, respectively. Hell, the fact that this sucker runs nearly three hours — and was reportedly first cut at that length — is a testament to Johnson’s ambition. And it’s hard to criticize ambition with regards to Star Wars, seeing how that’s partly been its Achilles’ heel as of late. No, this is a sequel that keeps on giving, even when the giving gets a little too much.

For all its strengths, The Last Jedi is a very manic film, fueled by excellent ideas that could have been parsed out in smarter ways. Like a young Anakin Skywalker — or rather, a teenage Ben Solo — Johnson gets reckless with his new powers, twisting and evolving the narrative in ways that become almost exhausting, even if it’s often interesting. It’s like listening to your old man rattle off compelling stories far into the night; at some point, you want to stop him and say, “Whoa, Pops, save some of these for later, huh?” This is a good problem to have in the writer’s room, but not on the silver screen. Four epic climaxes and five solid endings is downright gluttonous, especially given that this is the middle of the trilogy, where things need to linger.

That’s not to say things aren’t simmering by the end of The Last Jedi. Again, what’s most exciting about this chapter is how Johnson shakes up the past and the future. Luke Skywalker has never been more intriguing, returning to audiences as this grizzled sad sack with a chip on his shoulder, and Mark Hamill delights in the new fatigues. Kylo Ren’s motives are by far the most labyrinthine of any villain in this series, embracing the sours of change in ways that will only be appeasing to those who have always welcomed them. Looking more and more like Alan Rickman circa Prince of Thieves, a now-maskless Driver oozes with venom and pathos previously unseen during the majority of Force Awakens. Similarly, Ridley offers a more personable turn as Rey, whose murky background now seems thankfully superfluous to her vital path ahead. The only issue is that Johnson can’t contain his excitement, ever eager to move on to the next beat.

To be fair, Abrams also overstayed his welcome with The Force Awakens, opting for the next money shot with the super-rushed Skywalker reveal, when he should have stayed behind to grieve over Han Solo. Johnson overindulges at the end, too, but it’s mostly at the expense of what could have been some great final shots. Still, one gets the sense that each writer and director who hops aboard this proverbial ship tries to do whatever they can before the next hotshot follows. And let’s not forget, Hollywood dunce Colin Trevorrow was originally supposed to take the reins from Johnson, so maybe he wanted to get in all of his most brazen ideas before the class clown behind Jurassic World came in for the pre-imminent fumble. Or, maybe these sequels have simply been in the hands of geeks who always dreamed of being George Lucas … and don’t want to wake up.

(Read: Star Wars: Revenge of the Sith Is Just The Room in Space)

If so, both surpassed their Master. Whereas Abrams recaptured the majesty and innocence of the original trilogy with the much tighter Force Awakens, Johnson nails the ingenuity and the politics of the prequels with the far looser Last Jedi. And say what you will about that godawful second trilogy, but Lucas was never out of bold ideas or social commentary. His problem was that he could never make it fun; instead, it was like hanging around a bunch of trees wearing cheap clothing from a local Renaissance fair. That’s not the case for The Last Jedi, which not only retains the magic of its predecessor, but takes some audacious risks in the process. Not all of them land — some are even quite asinine — but they’re the type of risks this franchise needs in order to stay unpredictable. In fact, the worst thing to do now would be to restore any kind of balance to the Force.