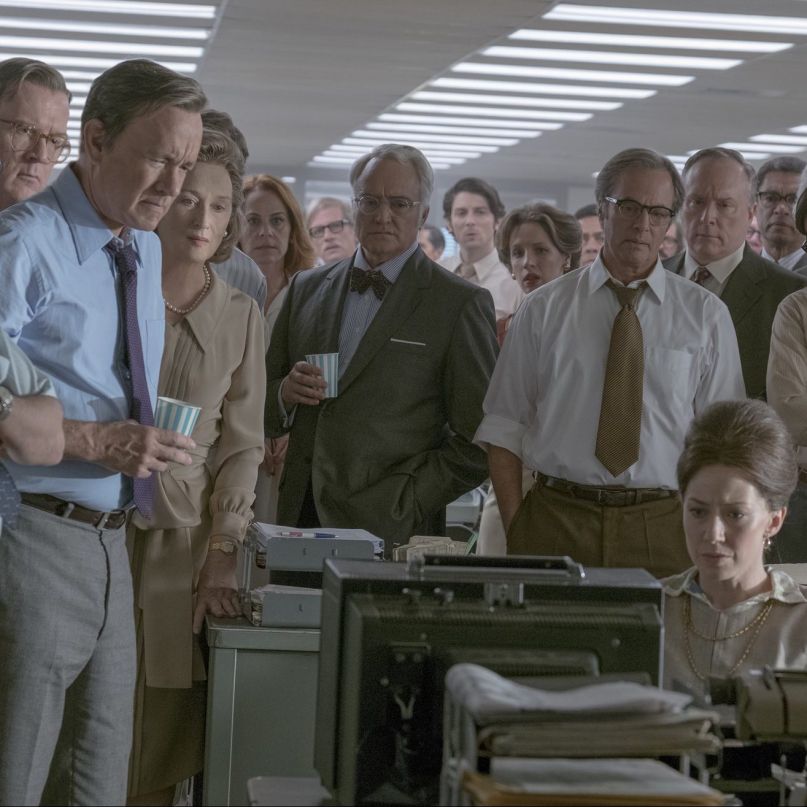 A stubborn, nihilistic president waging war with journalism in the United States because he doesn’t like the ways in which he might be represented? Get out of here.

Granted, Nixon punishing the Washington Post by vetoing credentials for a family wedding is a little different from Trump referring to all news he dislikes as fake, but you get the point. For its part, The Post is more than happy to take aim. It wants you to draw those allusions, a reminder of the 40-odd year fight that still rages on.

Relevant. Timely. Urgent. Important. These are all buzzwords fit to print (or blog, Tweet, and other forms of ‘social sentiment’) about The Post. There’s no way to begin talking about The Post without acknowledging that sacred, albeit overused, compliment: relevance. You grow tired of hearing about it, but the freedom of the press is still a big fucking deal, and The Post understands this. Hastens to it. Even if it’s all a big “duh,” it’s nice to see the press portrayed as this scrappy, noble, and exciting.

It’s that electrified current of good work and principled press that saves Steven Spielberg’s The Post, a disorderly but deeply likable potboiler. It’s a surprisingly wiry effort from the venerated helmer, a film which builds to a crescendo in hopes of meeting a historic deadline. The prime conflict here exists with The Washington Post, up against that damned Nixon. Fundamentally, the film is fine as a race against time, but it’s a shame that this pacing sidesteps traditional qualities like rich characterization, attention to detail, and meditation on bigger ideas. Spielberg’s all about news travelling fast, and to see him direct so jazzily is an unexpected treat. It’s the right idea, even if the result doesn’t quite feel so. The film’s m.o. is less about illumination than about just keeping up. You have to trust Spielberg and his cast’s fast-paced newsroom.

Long before Bezos, The Washington Post experienced a vivid history, and there’s never been a more tumultuous and triumphant period for the newspaper than the 1970s. But the film begins like many stories of this era do – in Vietnam, man. 1966. Daniel Ellsberg (Matthew Rhys) is a RAND political analyst who rides shotgun into combat and reports objectively back to one secretary of defense, Robert McNamara (Bruce Greenwood). Despite a negative outlook from Ellsberg on the futility of war, McNamara manipulates Ellsberg’s recommendations – war is actually good, according to McNamara! It needs to continue for optics. For business. For politics. For America. And presidents buy it. Spielberg paints fast, with Ellsberg’s bafflement and jangled eyes offset by the grinning McNamara, and it’s in these conflicts that The Post lives.

McNamara’s active dismissal is the spark that lights the fire within Ellsberg, and results in the faxing of the Pentagon Papers, the now-notorious study that pointed to decades of White House lies, set upon an unsuspecting public while encouraging war for all the wrong reasons. Geneva code violations. A legacy of fear-mongering. It’s all on print, but how can something this deep ever get to print in front of a large enough audience that it’ll make a difference? In film parlance, think of the Papers as a sort of A-list MacGuffin.

Fast forward to 1971, Kay Graham (Meryl Streep, rarely better) and Ben Bradlee (Tom Hanks) are The Washington Post’s two key figureheads. Graham is the publisher, inheriting the paper from her father Eugene Meyer. It’s small, local, and even a little tabloid. Graham calls it “cash poor” with resignation. The paper’s chasing softball stories, and about to become publicly traded. You see Graham’s belief in the publication, that quality can foster profitability, but she’s inexperienced and struggles to present her voice. Bradlee, on the other hand, is traditional, confident, and a shade arrogant. He embraces the modern notion of American news dads, as everyone comes to his door for guidance and advice. Admittedly, Streep has the stronger and more complex arc, but more on that later.

Back to the Papers. When word breaks that The New York Times are trying to publish Ellsberg’s work, the Nixon White House slaps the paper with an injunction. It’s offensive, and an absolute affront to the United States’ tradition of free press, but in this moment The Washington Post has an opportunity. Where the Times may fail, the Post can pick up the torch and do what’s right. Bradlee must chase the papers around the edges of the law. Graham must show resolve as male board members breathe down her neck, pleading with her to squash the story for fear of presidential reprisal.

The clock is ticking. People keep talking about what a big deal this is. A war on the White House? Will the truth set us all free? The phrase “freedom of the press” is invoked to the point of exasperation. If this sounds a tad obvious, that’s because The Post isn’t breaking new ground. It’s more about worshiping sacred ground in the annals of news history. While that doesn’t make the story’s heft any less potent, there’s an overt familiarity that gets in the way. It’s like a great pitch for a story, with a decent opener and closing. But around the middle, the mind ambles as points of interest come and go. It’s the weirdest feeling, struggling with whether or not The Post is any good. In short, it is and it isn’t. You want to respect it. You likely will. But often, you’re left in search of a deeper connection.

Consider the ways in which the film’s many different modes vacillate. Streep is tip top, as Graham presents the actress with a rich, nuanced performance about an elite publisher in waiting, and Streep delivers when the time is right. It’s a testament to the performer and her emotive gifts that when the film comes down to her making a big choice over the phone, it feels genuinely epic. To watch her anxiety while entering board rooms full of terrible men is Spielberg at his most instinctive. Pointedly framing her in dens of black-suited gatekeepers, Spielberg understands her fight. You root for Kay Graham, and rightfully. She gets the film’s mightiest moments as she overcomes her own fears. It’s proverbial Best Actress stuff. But then she’s paired with Hanks in a stodgy archetype. He’s gruff through the back of his throat. Maybe it’s just a preference, but Jason Robards at least had some enigmatic mystery to him as Ben Bradlee in All The President’s Men that rang truer than Hanks’ near-showboating. A great lead, and a lesser counterpart.

Other cast members excel. Bob Odenkirk is the genuine article as Ben Bagdikian, a Post writer seeking the Papers. He’s a weathered reporter, but one with a still-beating heart on the inside. Fearful of bringing down the paper with dicey sources. Proud to be part of something big in spite of his age. The hope that he can still rebel. When presented with a bad legal option on publishing the Papers, Bagdikian replies, gruffly, “Outside of landing the Hindenburg in a lightning storm, that’s about the shittiest idea I’ve ever heard.” He lands that zinger.

The entire cast is excellent, but by sheer virtue of volume and familiarity, rather than consistent dramatics or great lines. The Post’s talent pool is deep: Carrie Coon, Sarah Paulson, Tracy Letts, Alison Brie, Jesse Plemons, Zach Woods, Michael Stuhlbarg, David Cross. What a sight. And they’re all so spry. Cross’ nerdy smile, and Coon’s casually affected seen-it-all vibe. Everyone works fast on archetype, but that’s a polite way of saying that no one gets much more room than a scene to offer something compelling.

In fact, a few of these actors don’t do or say a whole of a hell of a lot, come to think of it. And that’s on the crammed script from newcomer Liz Hannah and Spotlight’s Josh Singer, a cluster or clues and one-off soliloquies. Hanks takes a turn discussing toughness. Then Streep takes 90 seconds to admit her doubts. Coon announces a Supreme Court moment over the phone, and it’s a moment of impact, but says nothing about her character. When Walter Cronkite breaks the news of the Times injunction prohibiting the publishing of the Pentagon Papers, everyone gathers around a TV in the office, taking turns at doling out dinner-theater lines.

Janusz Kaminski’s camera operates like something out of a Tom Hooper film, with whips, dips, and economical but wobbly takes that careen around the newsroom in a way that begs the question of “why?” Still, it has purpose, capturing the idealism and edgy enthusiasm of being in a no-shit newsroom with a nervous energy that sells the ironic beauty of being a part of the press. A bunch of schlubs in low-ceiling offices and short-sleeved shirts still look and feel exciting.

And that ties directly into the almighty relevance. The Post is bluntly so, what with its comments on sexist workplaces, the struggle to publish fairly, and racing-the-news-cycle filmmaking. It’s the kind of film that ultimately makes you count your blessings, root for the good guys, and maybe even shed a tear or two at the sight of the press kicking ass. Ben Bradlee and current Post Executive Editor Martin Baron had the same sparring matches with the White House, just in 1971 and 2017, respectively. And that’s The Post’s most potent quality.