Finally, a collection of Christmas music that actually made the holidays cool 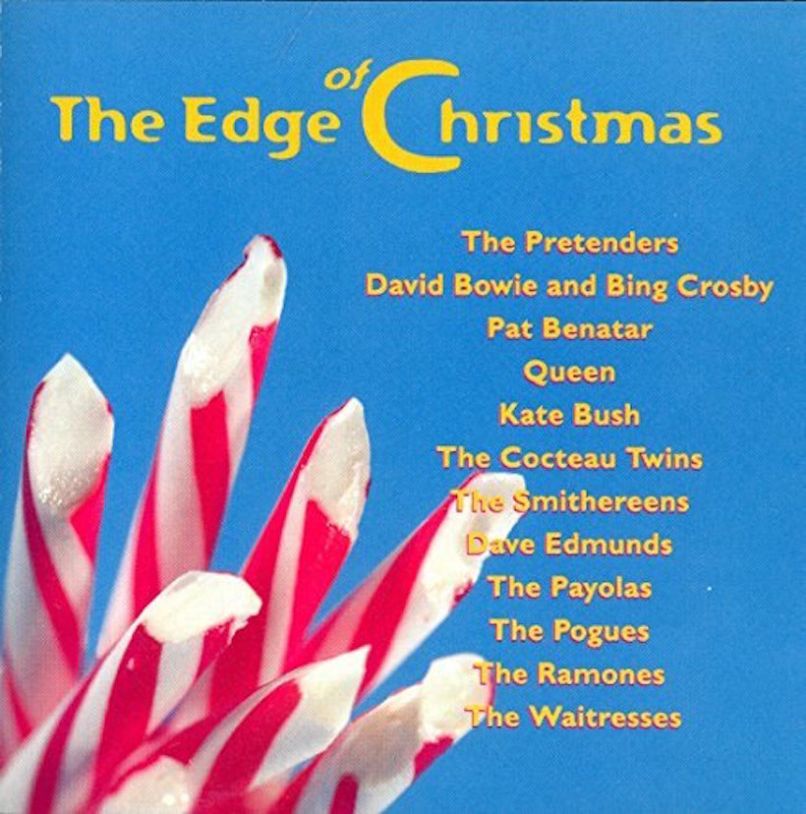 Dusting ‘Em Off is a rotating, free-form feature that revisits a classic album, film, or moment in pop-culture history. This week, Nina Corcoran looks back at The Edge of Christmas and how a collection of new wave songs changed the path of holiday music.

Growing up, I never understood why people hated Christmas music. It’s music full of merriment, celebration, love, and awe in a time of generosity. Sure, the gaudy songs played in the mall weren’t fun, but those weren’t real holiday songs. Those weren’t the good ones, and people had to be aware of the difference. After all, nothing sours Christmas the way a grinch does, but for whatever reason, a handful of classmates and adults would transform into that hairy, green monster whenever they heard carols.

Whenever my family unboxed garland and began organizing ornaments to hang on the tree, my mother would walk over to the CD player and put in our favorite one. The machine would whirr. Two seconds of silence would follow. And then, rising from the speakers, drums would ring out, and Freddie Mercury’s voice sang to us. It was magic.

It wasn’t until middle school that I finally understood: people were listening to the wrong Christmas songs. The classic piano of Charlie Brown and deep belly grin of Otis Redding were staples, but those other songs? The campy “Feliz Navidad” and squawky voices of “The Chipmunk Song” that played on the radio each year? Those turned peaceful drivers into humans on the brink of road rage. For good reason. Those songs drone on. Then come modern singers trying to doll classics up in diva vocals. Christmas music evolves every decade, sometimes for the worse, but we overlook its gems when we aren’t paying attention. And so we have to pass it on. There was that one CD — the one my parents slipped in to commence tree decorating — that changed everything for me. It was the sound of unannoying joy, of full-hearted love and cozy hot cocoa, of being with people who make you feel comfortable. You know, what the holidays should speak of.

It took until high school for me to finally find out what the album was called. It’s The Edge of Christmas, a compilation record from 1995 released by Oglio Records. That says it all.

For those unaware, Oglio Records is the new wave distribution hero. The record company was formed in 1993 by Carl Caprioglio, a California DJ who grew up listening to KMET, KLOS, and KROQ religiously, often taking notes on the playlist for his own use. He climbed his way up the underground scene by spinning new wave deep cuts and modern rock hooks. Caprioglio was the king of songs that made people burst into dance without needing to be familiar with their melodies — a talent any proper DJ should be gifted with. In little time, Capriglio’s record company gained a reputation for releasing compilations record collectors would die for. He stacked his CDs with rarities, unreleased tracks, and forgotten numbers hidden at the end of full-lengths. Only two years into the business, he put out The Edge of Christmas, arguably the label’s biggest compilation and one of the best Christmas albums of all time.

The whole thing kicks off with Queen’s “Thank God It’s Christmas”, a single released in November of 1984 that skates through heavy echoes and gentle backing synth. But this is where Caprioglio’s knowledge comes in. Nowadays, the internet makes discovering one-offs easy. Back then, he did his digging. The song wasn’t originally released on a studio album. It received no music video or promo. The band snuck it onto Greatest Hits III, but that wasn’t until 1999. It was a lone 7″ and 12″ floating around, relatively unknown and un-promoted, even among Queen fans. So not only did Caprioglio snag a copy, but he used the 12″ version — the rendition that takes its time, an extended drum intro shaking out before Mercury’s vocals begin — to kick the compilation off with a chilling, snowy mood.

The Edge of Christmas is full of vibrant originals like that. It boasts a tracklist of Christmas songs so full and inventive that it’s hard to remember what Christmas songs you sang before these. Instead of keeping things chipper and full of faux perfection, Capriglio chose originals by bands that shift the stereotypical holiday dynamic, like The Pogues’ bitter, comedic hit “Fairytale of New York” and the Ramones’ “Merry Christmas (I Don’t Want to Fight)”.

Don’t let that mislead you. The Edge of Christmas scoops a handful of classic holiday songs up and then re-imagines them in glossy sheen. Pat Benatar, the woman behind “Hit Me with Your Best Shot” and “Heartbreaker”, sings “Please Come Home for Christmas” with a bluesy wail, belting the notes without the vocal flips of someone trying to show off their full range. New Jersey rock act The Smithereens give “Rudolph the Red-Nosed Reindeer” a major face lift, complete with a guitar solo fit for Back to the Future. Dave Edmunds squishes a similar guitar solo into his brand of pub rock on “Run Run Rudolph” as well. The covers used here are the work of someone who handpicks with care. Without Capriglio’s touch, those rock-centered versions wouldn’t fit next to David Bowie and Bing Crosby’s version of “Peace on Earth / Little Drummer Boy”, but they do.

This is a record meant for sharing. Pass it around to friends, play it at holiday parties, or spin it in your car on full volume. The Edge of Christmas and its spiked candy cane cover were created to jab Christmas music in the side so it sits upright and to bring a new flavor into the dreary renditions that rotate on loop in the mall. This sounded fresh in 1995. It still holds up over 20 years later.

The Edge of Christmas makes a smart decision from the get-go: This won’t be a record of songs rooted in religion. The beat-down of church anthems or caroler delivery are for years past. Instead, spirits are lifted by songs that emulate the silence that follows snowfall, the sweet-smelling warmth of a kitchen with cookies in the oven, and children’s smiles without the petulant screeching. No song offers those feelings here quite like the Cocteau Twins’ cover of “Winter Wonderland”. It’s an often overlooked cover off their 1993 EP Snow, which, like most every record by Cocteau Twins, is out of print and impossible to buy a copy of, with this release specifically being limited to 5,000 copies.

That magic stems from the new songs that change the narrative of holiday music. Over a decade before the compilation was released, The Pretenders put out “2000 Miles”, a song written to honor the group’s original guitar player. Everyone from Coldplay to Kylie Minogue has covered the song since, often singing it as if the mileage represents the distance between two lovers, but the original — a UK single preceding 1984 LP Learning To Crawl and a US B-Side to “Middle of the Road” — is steeped in gorgeous guitar work and rich instrumentals to hide Chrissie Hynde’s voice. As such, it gives the illusion of weathered buildup, as if she and the listener are hiding inside a room to stay warm while the music piles outdoors.

Most people claim they bought The Edge of Christmas because it tells a different side of holiday life. They’re speaking less to The Payola$’s song “Christmas Is Coming” and more so about the genius of “Christmas Wrapping” by The Waitresses. The song’s an ode to single life in a snowy town, bad luck, and Christmas magic, all dolled up in a Blondie-styled delivery that gives it that classic ‘80s punch. For some, The Edge of Christmas isn’t just about shifting the musical style of holiday songs, but about shifting the family and religious tint most classics steep in.

And yet for me, as a child growing up and as an adult who returns to this album with utter joy come the winter, The Edge of Christmas is a record of brilliant rarities. It served as my introduction to Kate Bush via a song even Kate Bush fans are unaware of. In 1980, she released “December Will Be Magic Again” as a UK single. But its history is bizarre. She technically wrote it in 1979 but held off on releasing it until November of the following year. It peaked in England, but the early release kept it from staying on the charts through Christmas week. Bush never released a promotional video. She never included it on a full-length LP. She never put it on an EP. Instead, the only copies available are the 7″ copies die-hard fans cling to and a few Christmas compilations that got their own copy to be included. That’s where The Edge of Christmas, once again, wins.

She performed the song on her 1979 Christmas television special, which brought it to fans’ attention, but that live rendition varies from the original, with Bush elongating her vocals and several backing instruments failing to appear. On the recorded version (Note: only two videos on YouTube have this version, one of which features LOL Cats and the other of which features scenes from The Nightmare Before Christmas, neither of which have ties to this song directly), Bush plays piano with playfulness, like she knows what’s about to happen. As she chirps her way into the verses, guitar trickles behind her. By the time the chorus kicks in, the song goes all in: drums, sleigh bells, maracas, synth, and bells shake, giving the song a more orchestrated sound than Bush’s ballad-style songwriting. It’s a gem of a song, both in her catalog and in holiday music’s catalog at large.

Did The Edge of Christmas save Christmas music? To those who have heard it, yes, it did. It provides a rush of new wave and alt-rock renditions of holiday songs to combat the cheese blasted everywhere else. And to this day, I still get a genuine thrill of finding others familiar with this record. When you meet someone who owns The Edge of Christmas, a conversation follows suit about the alternative way of going about the holidays, about singing Christmas songs you wish people joined in on, and about never understanding the hate for holiday music. So this season, I gift this album on to you. It doesn’t exist on streaming services like Spotify or Apple (though many of the individual songs can be found), but CD copies can be purchased for under $10 online. Buy it. It’s worth every penny and remnant of brilliant ‘80s genius. We promise. So with that, we wish you a merry Christmas, happy holidays, and a very new wave year.