"I get no pleasure from this conversation. But you and I are not the victims here." 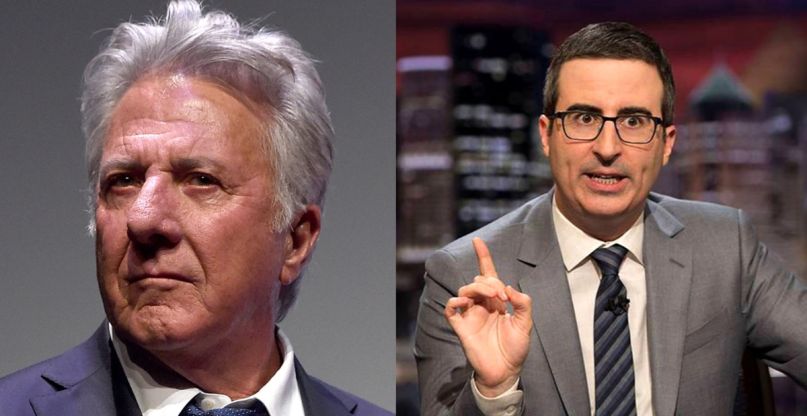 Dustin Hoffman has been accused of sexually harassing a 17-year-old production assistant on the of the 1985 TV film adaptation of Death of a Salesman. This evening, the veteran actor was forced to publicly address the allegations during a Q&A preceding a 20th anniversary screening of Wag the Dog.

Last Week Tonight host John Oliver moderated the Q&A which also featured co-star Robert De Niro, producer Jane Rosenthal, and director Barry Levinson. As “sexual harassment is an under-plot and there’s an elephant in the room because this conversation is not being had,” Oliver asked each panelist to share their thoughts on the tidal wave of sexual abuse allegations being made against male members of Hollywood. What followed was a heated conversation between Oliver and Hoffman that lasted upwards of 30 minutes, according to Deadline.

In a detailed account published in The Hollywood Reporter last month, Anna Graham Hunter described a number of occasions in which Hoffman either groped her rear or made obscene sexual comments on the set of Death of a Salesman. At the time, Hoffman responded to the allegations saying: “I have the utmost respect for women and feel terrible that anything I might have done could have put her in an uncomfortable situation. I am sorry. It is not reflective of who I am.”

Oliver took umbrage with Hoffman’s statement. “Does that feel like enough to you?’ he asked. Hoffman responded by saying, ‘First of all, it didn’t happen, the way she reported.’ Hoffman said his statement was made only at the insistence of his representatives and “was widely misconstrued ‘at the click of a button.'” Even so, Oliver said, it was the wording of Hoffman’s statement — specifically, the part about it not being “reflective of who I am” — that was problematic.

“It’s that part of the response to this stuff that pisses me off,” Oliver explained. “It is reflective of who you were. You’ve given no evidence to show that it didn’t happen. There was a period of time when you were creeping around women. It feels like a cop-out to say, ‘Well, this isn’t me.’ Do you understand how that feels like a dismissal?”

Hoffman shot back, ‘You weren’t there.’ Oliver responded, ‘I’m glad.”

And it only got more heated from there, as Deadline notes.

“You’ve put me on display here,” Hoffman told Oliver, seething but never raising his voice or leaving his seat. “You have indicted me. … That’s not innocent until proven guilty.”

Hoffman tried to put it in historical context, saying sometimes the atmosphere on set decades ago involved sexually charged banter, which he said was not meant in an offensive way. “I don’t love that answer either,” Oliver said, cringing. “What response do you want?” Hoffman demanded. “It doesn’t feel self-reflective in the way it seems the incident demands,” Oliver explained, adding, “I get no pleasure from this conversation. But you and I are not the victims here.”

When Oliver quoted from an account Hoffman’s accuser wrote, the actor asked Oliver, incredulous, “Do you believe this stuff you’re reading?” Oliver said he did “because she would have no reason to lie.”

Throughout the Q&A, Oliver apologized to the audience for “ruining” their evening. However, he said, “I can’t leave certain things unaddressed. That leads to me at home later tonight hating myself, asking, “Why the fuck didn’t I say something? No one stands up to powerful men.”

Update: The Washington Post has obtained video of their conversation.