Live Act of the Year St. Vincent Defies Expectations with Her Fear the Future Tour 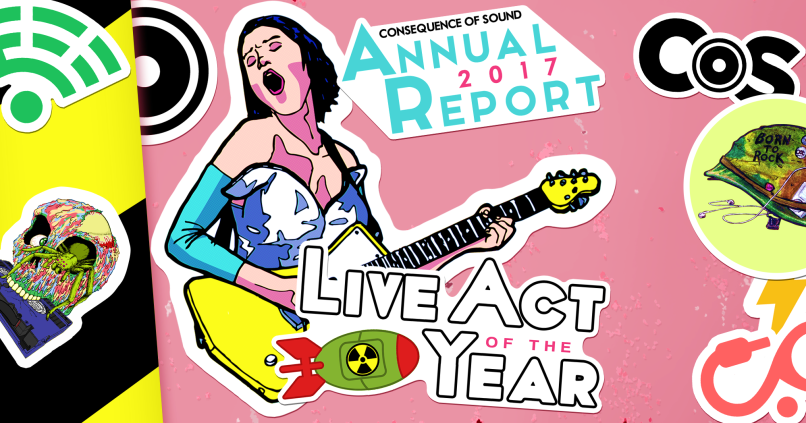 Polarization was, however dishearteningly so, established as the new cultural norm in 2017. The first cut was undoubtedly made in politics, but it’s bled into everything from Star Wars to sexual assault. It’s been a year when expectations no longer seem to matter, when preconceived notions get blown away by situational reality. In a world like this, the only sane thing to do would be to embrace the insanity, warping it to fit the righteous vision of your own design. That’s exactly what St. Vincent did every night she took to the stage on her Fear the Future Tour.

Annie Clark has long been praised as much for the visual presentation of her art as the music itself. The intricate stage designs and choreography of her previous tours set a standard for what a St. Vincent concert-going experience was “meant” to be like. Which is why some fans found her relatively sparse performances behind this year’s stellar MASSEDUCTION so, well, polarizing.

The shows were still highly choreographed, but the movements were limited to the stage itself, the lights and the curtains. There was, in fact, no one else up there besides St. Vincent herself. She stood alone, often not center stage, with her self-designed instrument and a mic stand while backdrops and LED screens flashed an array of visuals. Gone were the touring musicians with whom she’d played alongside in years past, replaced with a backing track for everything except Clark’s own deft guitar work.

Some felt robbed by this, as if they were owed larger production from a rock show. That’s a strange complaint when you consider the singular nature of St. Vincent’s persona and music. You’d never hear the same quibbling about a pop vocalist taking to the stage without a live band. Sure, you’d want a few backup dancers and some interesting staging, but few would miss the sight of a drummer. As an avante rock musician, all Clark did was replace those dressings with an arresting lightshow and a pop-art mise-en-scene.

None of which was done casually. In fact, the story of the show literally pulled back the curtain on the entirety of St. Vincent’s career. Each performance opened with her standing far stage right behind a slight break in a theater curtain as she presented selections from 2007’s Marry Me through her 2014 self-titled effort in chronological order. As the setlist progressed, the curtain was drawn back another few feet, with Clark repositioning herself farther along the stage until it was completely revealed. Then the curtain closed entirely again, only to reopen after a slight intermission to show Clark in a new outfit standing atop a centered platform in front of massive LED screens. She’d proceed to play MASSEDUCTION front-to-back, complete with visuals from the singles’ music videos projected behind her, all fitting the vibrantly hued futuristic dominatrix aesthetic she’s adopted this album cycle.

A testament to the fact that her latest album is indeed one of the year’s best, St. Vincent’s set arrangement also adroitly encapsulated how she’s evolved to this point. The 2011-2012 Strange Mercy tour was Annie Clark coming into her own as St. Vincent, an act she followed by teaming with the inimitable David Byrne for Love This Giant and its subsequent road show. She adapted some of that joint trek’s robotic, surrealist vibes for her own purposes on the massive Digital Witness Tour. There, we began to truly see Clark as an uncompromisingly distinctive performer as she employed modernistic choreography and lighting in a fever dream of artistic exhibition.

That fever broke with Fear the Future. Shaken from the embellished theatrics of years past, this tour — hell, this whole MASSEDUCTION cycle — has been Clark taking stock of all that came before as a means of gaining clarity on the present and her position in it. Upon realizing that the now is a laughably absurdist reality of broken promises and uncomfortable truths, a return to an equilibrium of normality (i.e. a full band show) would be unjustifiable. Instead, Clark availed herself of an even bolder sort of insanity, one wholly possessed by the individual, as if doubling down on the world’s madness as a means of deconstructing it.

Such brash subversion meant avoiding pretension or risking antipathetic doom in a climate of division and quick-triggered hatred. Which is why it had to be just St. Vincent on that stage. As her wry approach dismantled the societal constructs of expectation and acceptability, she stood courageous amidst the rubble declaring, “This is me, fully realized. I am me. I am one of you.” Having formed herself into something of a rock goddess over the last few years, such a statement would read pandering delivered with the bombast of past tours.

Still, the lasting brilliance of Fear the Future was how it wasn’t just about the performer. While demonstrating the journey she’d taken to get to 2017, Clark beckoned onlookers to examine their own stories. We’re living in a world where we can barely believe the reality right in front of us. The only way to survive is to be confident in who you’ve become and stand defiant in the face of what others demand of you, to brave the chasm between each other without sacrificing ipseity. St. Vincent changed nothing about herself for the Fear the Future tour; in a way that only an artist in complete command of her craft can, she simply embraced it in its purest form yet. Expectations be damned.