The Danger of Satirizing Feminism

In a country where racism and sexism run rampant, is satirizing feminism going over heads? 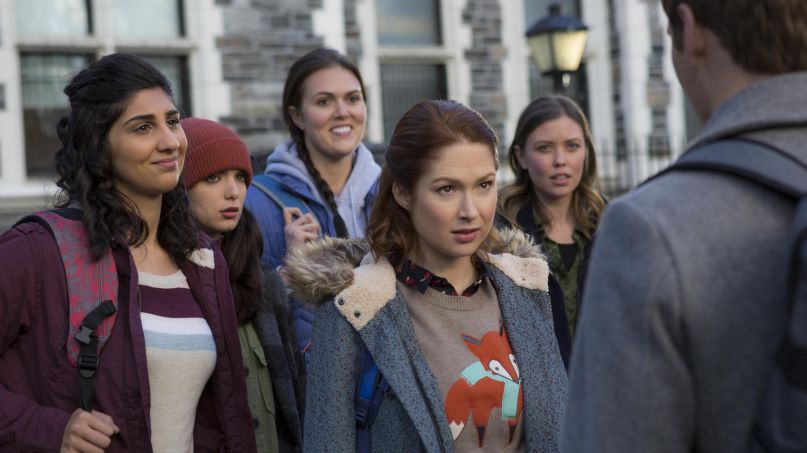 Merging entertainment with politics is as tricky as it is necessary in a media-guided society. The task is particularly complex with comedy, running the risk of purveying passivity by making light of a serious issue, or, arguably worse, telling a joke that backfires. Malcolm Gladwell probed the often volatile relationship between satire and politics earlier this year on an episode of his podcast, “Revisionist History”, called “The Satire Paradox”. One of his guests, a Communications scholar from Temple University named Heather LaMarre, dissects Stephen Colbert’s dual-sided character on the Colbert Report as an example of the polarizing effects of political comedy. “Why are my Republican friends and family members watching him every single night? And they find him hilarious, but they see him as making fun of Liberals. And my Liberal friends love him to death and are the biggest fans ever and think it’s hilarious that he’s making fun of people like Rush Limbaugh and Bill O’Reilly,” she says. “They would talk about the show as if it was equally funny but in completely opposite ways … they saw what they wanted to see.”

This is one of the walls that feminist comedy often runs into. A lot of supposedly feminist TV comedies operate under inaccurate post-sexism pretenses, as if the concept of someone actually being a misogynist is absurd and laughably outdated. This attitude has been coined as “Hipster Feminism,” or, as NYMag explains, “the objectification of women but in a manner that uses mockery, quotation marks, and paradox: the stuff you learned about in literature class.” Folks of this mindset might see laughter as a fitting response to patriarchal ideals, but the joke falls flat when the punchline is gender inequality.

What Feminist comedy often doesn’t take into account is its non-feminist audience members, those who won’t find stereotypes ironic and will see it as confirming their view of reality. As its name boldly implies, the CW’s musical rom-com series, Crazy Ex-Girlfriend, tries to tackle a common female stereotype head-on. Rebecca Bunch (Rachel Bloom) is the “crazy ex-girlfriend” who moves to LA to chase (and stalk) her teenage flame in the hopes he will cure her anxiety and depression. The show’s creators said they wanted to deconstruct the “crazy ex-girlfriend” trope, but they end up making a case for it. Trying to disprove two stigmas — women as “crazy” and mental illness as “crazy” — is admirable, but it proves to be too ambitious when Rebecca and her female friends embody the titular stereotype.

Season three opened this year with Rebecca seeking revenge after having been left at the altar, a plot line that further validates the stereotype the show sought to rectify. But it gets worse — the episode includes a song called “Let’s Generalize About Men” in which Rebecca and her girlfriends down wine and, well, generalize about men. This is funny for a second, until you realize that this is an actual argument that people make against feminism. You know, the “man-hating feminist” moniker. Anyone familiar with this post-breakup “all men suck” kind of powwow will recognize the satire in this sketch. But there’s a more than likely chance that lines like, “Right now we’re angry and sad/ It’s our right to get righteously mad/ At every member of the opposite sex,” fuel anti-feminist opinions by giving them more material. In a positive episode recap for Vulture, Allie Page admits, “It’s so good at skewering the ‘kill all men’ mentality that I’m actually worried MRA types might seize on it as a nice bit of self-justification — before they go back to generalizing about women, of course.”

Perhaps the most crystallized instance of anti-feminism was in the show’s first season with its Fifth Harmony-esque number, “Put Yourself First”, deriding the notion that women want to look sexy for themselves. This opinion is far from uncommon. Unbreakable Kimmy Schmidt dedicated an entire episode to it earlier this year. In the episode titled “Kimmy Is a Feminist!”, Kimmy (Ellie Kemper) hangs out with a group of college girls who try to teach her about this new-fangled development called feminism. Imagine! The girls give Kimmy a pre-party makeover that night, dressing her in a tight, red mini dress and thigh-high boots. “So this is feminism,” Kimmy says. “I didn’t know it would hurt my feet so much.” One of the girls responds, “That’s so your butt looks good. For you.” Dressing “for yourself” has become somewhat of a parody of sex-positivity and a played-out one at that. It positions a preference for sweatpants as morally superior to a penchant for heels and makeup.

“I look like a hooker,” Kimmy remarks, slightly disgusted at her reflection. Another girl responds, “They’re ‘sex workers,’ and they’re heroes.” You’re supposed to roll your eyes at this “woke” young woman, feminism and sex workers being the butt of the joke. This is where the floodgates open, and the liberal education bashing begins. “I’m taking Power and Gender Marginalization in Contemporary Yogurt Commercials this semester,” one says. After being at the drunken college party, Kimmy decides they’re all “babies” and assures her crush that she “doesn’t usually dress like this.” Kimmy’s meant to be the relatable protagonist, speaking to those who also mock campus feminism.

“Kimmy Is a Feminist!” received a good amount of flak from the media for its tone-deaf takedown of young feminists. Mindy Kaling’s series, The Mindy Project, speaks from a similar brand of humor and has long been criticized as problematic for its glorification of white men and casual stereotyping. Mindy, a successful Indian-American OB/GYN, has a thing for white guys, a theme she has occasionally poked fun at, but it took the show until its fifth season to point out the inherent white male privilege at play. Containing the issue to a single episode, “Mindy Lahiri Is a White Man”, feels like a lousy press apology.

Sexist male characters on The Mindy Project are treated with sympathy — Mindy’s ex is introduced as a traditional Italian who tells Mindy (lovingly!) how she should and shouldn’t behave. Then, of course, there’s Dr. Kimball Kinney, the lovable Southern sexist. While he does have redeeming qualities, there’s always an anti-feminist joke to be made. His old-world attitude — of the “women should stay out of the workforce and in the kitchen” variety — is such a tired comedic riff; notwithstanding feminist audiences, I can’t imagine anyone finds it particularly funny or intelligent satire. However, to audiences who share this worldview, it’s a great joke; it’s one they’re in on, just as Kimball’s coworkers laugh off and normalize his sexist remarks. That said, the show has its merits, like employing an Indian-American female lead without sensationalizing it although some have questioned the decision not to delve too far into race.

Evaluating feminist comedy presents a variety of thoughts to consider — not all shows about women need to make political statements, and giving women specific guidelines to abide by in order to be successful is its own form of anti-feminism. Censorship isn’t the solution. Neither is holding female-led entertainment to a different standard than male-led entertainment. But, similar to entertainment dealing with race and religion, when we consider feminism in the context of entertainment, we have to remember that there are plenty of bigoted audience members who will understand the satirization of women and feminism as exaggerated truths.

Comedy and feminism blend successfully when treated with keen sensitivity and intersectionality. The aforementioned shows have been widely criticized for subscribing to ‘White Feminism,’ a type of feminism that fails to recognize white privilege and, in turn, does not fully acknowledge the unique struggle faced by women of color, trans women, and women belonging to minority groups. Issa Rae’s Insecure elucidates complications tied to living as a black woman in a society that covets whiteness and masculinity. The show is more of a dramedy, including moments of humor without putting feminism at stake. Insecure is beautiful because it leaves little room for misinterpretation, understanding that there’s really no time for it in the interest of social progress. In a country where racism and sexism run rampant, is satirizing feminism worth it?