It's been a strange year full of killer clowns, musical cars, and sad kids 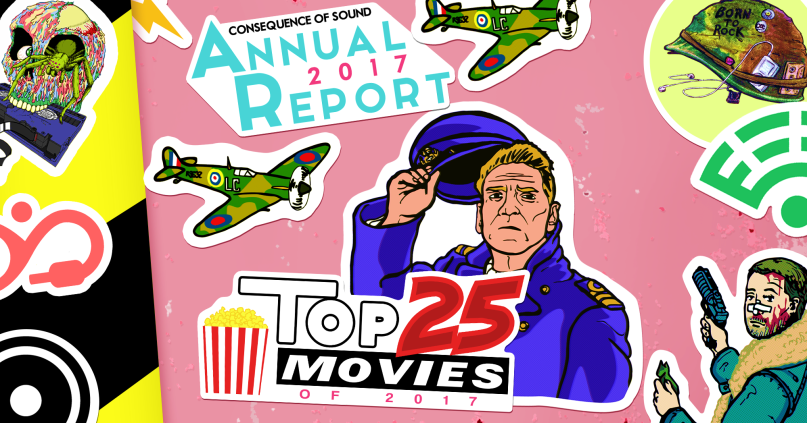 It’s been a weird year to like movies. Art in general, really. But the film industry has been the near epicenter of what many hope will be a genuine and lasting sea change within American culture. Power structures were challenged at a historic level. Darlings had to be killed. A few deeply unfortunate and untimely films were released. Some of the movies you used to like have become a challenge, in a way you might have hoped they wouldn’t, but now have to be. Victims, from recent years and decades alike, came forward in a world that at once questioned them in vicious ways and upheld their absolute right to be heard.

But in a year where a number of films became lightning rods for so many shifting dialogues about art and culture and inequalities of all sorts, it was sometimes difficult (and arguably, just a shade less relevant) to focus on the fact that 2017 was an exceptional year for filmmaking. Studio movies got weird and challenging, whether successful or not. Newly growing distributors revived a space in the moviegoing market for odder and more challenging stories. Fresh voices broke out while established directors achieved career highs. Film challenged biases, recast old franchises in striking new lights, and reached out to our troubled past in an effort to explain the tumultuous present. As a kind of fever gripped the world, our pop entertainment became part of the landscape, and a new wave of directors told their stories with greater purpose.

In so many words, it’s been a great year at the movies, from the ones you watched on your couch to the ones you caught in one of those perfectly loud Dolby theaters with the rumbling seats. It’s been a pretty difficult year for a lot of people, progress being made through so much pain being exposed on a constant basis. But as the emeritus film critic Roger Ebert once famously put it, “The movies are like a machine that generates empathy.” This world needs more of that these days, and at their best, we can look to the movies to speak to and show a path for our better nature. We can also look to them for compelling stories involving cannibals, killer ancient clowns, fish men, and superheroes of both the mega-budget and everyday varieties.

In 2017, the movies were hilarious and painful, sometimes all at once. So was everything else. Maybe a few of the films we chose below meant something to you or hopefully will. We could all use more things to love right about now.

You Gotta See This: Hype was high after the trailer for Andy Muschietti’s adaptation of Stephen King’s 1986 masterpiece broke YouTube, but the film itself did the unthinkable by delivering an honest-to-god crowd-pleaser. Sure, the CGI is overdone and Skarsgård’s Pennywise is a touch too chatty, but Muschietti succeeds where it truly matters — his Losers are charismatic, funny, and heart-swellingly relatable, their natural bonds forming a tender core to a story cast in so much caked, blood-splattered makeup. Fingers crossed they stick the landing.

Death’s just out of frame

as we live our messy lives

You Gotta See This: There’s much to praise in Lucky, but let’s not beat around the bush. In his feature-length directorial debut, renowned character actor John Carroll Lynch showcases another world-class performer, granting us the perfect final note in the long and remarkable career of Harry Dean Stanton. With Stanton’s death, this lovely posthumous release becomes an epilogue of sorts, but even if he were still with us, this performance, and a scene with a mariachi band in particular, would be both beautiful and bittersweet. What an artist. What a film. What a life.

Check out that Lasso of Truth

You Gotta See This: Wonder Woman was such a win in so many ways. It had a breakout lead in Gal Gadot, showing off a hero you’d love to adventure with. It was vengeance for Patty Jenkins after Marvel blew her off with Thor: The Dark World. It also made us forget about the state of DC. It gave audiences the leading heroine they’d been yearning for. It blended action and romance and spectacle in the Donner-esque manner that screamed “verisimilitude.” But above all – it delivered on the “wonder” it promised in the title.

Who’s In It? A cross-section of social activists and Ferguson citizens

To make your voice heard

You Gotta See This: Taking a street-level view of the days immediately following the killing of Michael Brown by a Ferguson police officer, Sabaah Folayan’s Whose Streets? not only makes a cogent argument for police reform, but it also offers a powerful call to action for citizens to become activists. The cell phone and the tweet are quickly becoming the most wide-reaching tools for political change, and this film shows the cumulative power of those tools to raise the voices of the marginalized.

You Gotta See This: Ruben Östlund’s Palme ‘dOr-winning piss take on the vapid world of top-dollar modern art exhibition and the people who organize it may be blunt in its purpose, but it’s also a singularly abrasive vision of an artistic practice stuck in constant loathing of the money that sustains it. Bang gives a breakout performance as a man who’s at turns contemptible and hilariously pathetic, Moss embodies a certain type of dilletantish obsessive, and Notary stages one of the year’s most terrifying film sequences, as a performance artist who takes the idea of relentless art to its violent, unsettling zenith.