Pai appears in a video with a Verizon vice president, who wants to "brainwash and groom a Verizon puppet to install as FCC chairman" 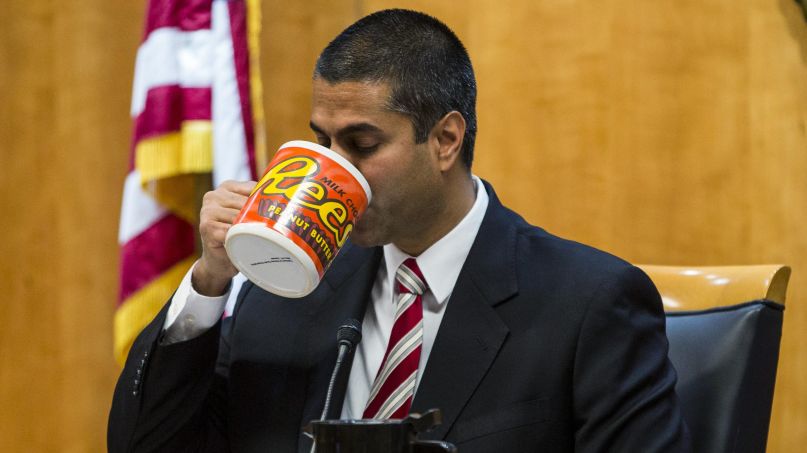 Next week, the FCC will vote to put an end to Obama-era net neutrality rules. The decision would have far-reaching implications for every American, as billion-dollar conglomerates like Comcast and Verizon would be given free reign to rule the Internet as they see fit. For example, internet service providers could conceivably create a two-tier pay-to-play Internet, where websites are charged extra fees for faster load speeds and other preferential treatments. ISPs could also slow down their competitors’ websites, block content it disagrees with, and impose data limits on users.

There’s nothing funny about the impending dismantling of the Internet, but don’t tell that to Ajit Pai, the Trump-appointed FCC chairman. Speaking at FCC’s annual gathering of the Federal Communications Bar Association this week, Pai joked about being a shill for ISPs. “In collusion—I mean, in conclusion, sorry, my bad—many people are still shell-shocked that I’m up here tonight,” he said. “They ask themselves, ‘how on earth did this happen?’ Well, moments before tonight’s dinner, somebody leaked a 14-year-old video that helps answer that question, and in all candor I can no longer hide from the truth.”

As Gizmodo reports, the video depicts Pai at Verizon’s offices, where he previously worked as an attorney. Kathy Grillo, Verizon’s current senior vice president and deputy general counsel, walks into the room and Pai gives her a high-five. She then remarks to Pai, “As you know, the FCC is captured by the industry, but we think it’s not captured enough, so we have a plan.”

“We want to brainwash and groom a Verizon puppet to install as FCC chairman,” Grillo responds. “Think ‘Manchurian Candidate.’”

“I know, right? There are only two problems. First, this is going to take 14 years to incubate,” says Grillo. “We need to find someone smart, young, ambitious, but dorky enough to throw the scent off.”

“We also need to find a Republican who can win the presidency in 2016 to appoint you FCC chairman,” Grill adds.” I think our best bet is an outsider, but I have no idea who that would be. If only somebody can give us a sign.” At this point, an episode of The Apprentice begins playing on a TV in the background.

What — were you expecting something funnier from the dude who drinks out of an oversized Reese’s Peanut Butter Cup coffee mug?

You can watch the full video here. Then, write or call your local congressman and participate in the online day of action in support net neutrality scheduled for December 12th.