The photographer, Chelsea Lauren, says she spent the night in the ER 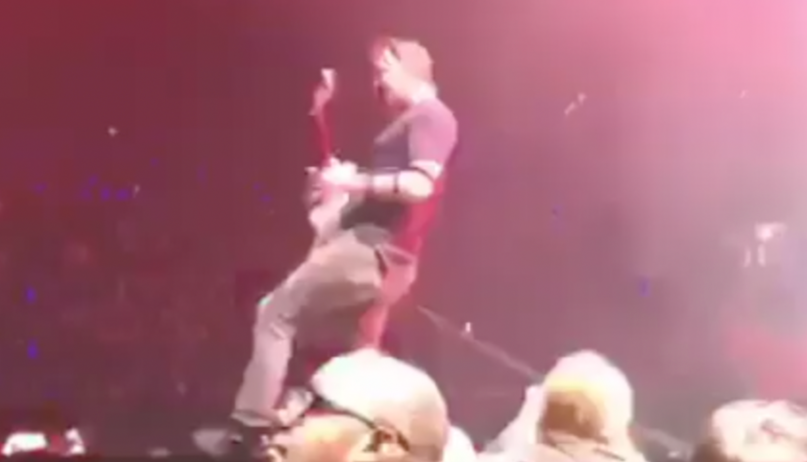 Video has surfaced of Queens of the Stone Age frontman Josh Homme kicking a photographer during the band’s performance at KROQ’s Almost Acoustic Christmas concert in Los Angeles on Saturday night.

The incident occurred during the fourth song of the band’s set, “The Evil Has Landed”. As you can see in the video above, Homme appears to deliberately kick the camera out of the photographer’s hands.

The photographer, Chelsea Lauren, posted the video on her Facebook page and added that she spent the night in the ER. In a follow-up comment, Lauren wrote that “there were no restrictions for photography for them… He was just being a drunk horrible human being.” Asked if she intends to press charges, Lauren responded, “I don’t think so… People are telling me to, though.” Update: In an interview with Variety, Lauren said she plans to file a police report on Sunday. She also told Variety that Homme’s kick caused the camera to hit her in the face. She returned to the pit to shoot 30 Seconds To Mars’ and Muse’s sets, but later received treatment at Cedars-Sinai Medical Center.

Update: Homme has apologized for kicking Lauren, saying “he was in a state of being lost in performance.” Update #2: He’s now issued a second apology.

Later on in the band’s set, Homme appeared to intentionally cut his face. He also called the audience “retards” and yelled, “Fuck Muse!”

We’ve reached out to both QOTSA and Lauren for comment.