Corgan and Chamberlin have been teasing new music on Instagram 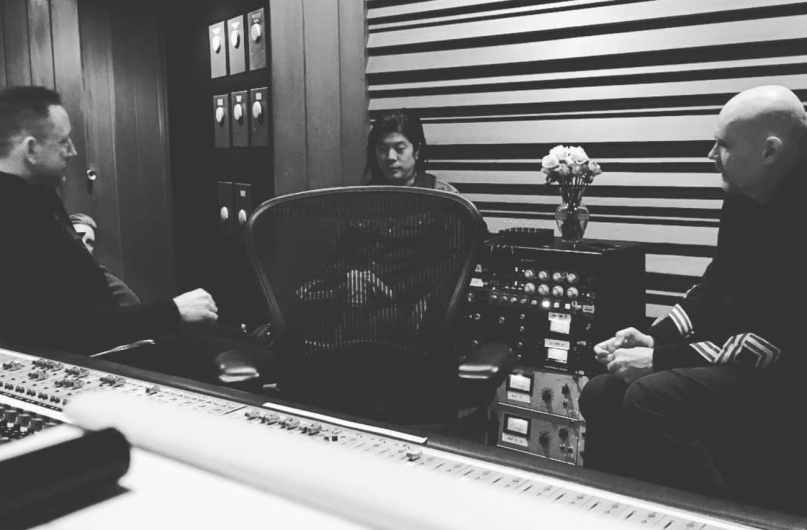 The idea of a Smashing Pumpkins reunion isn’t exactly revelatory. Billy Corgan has been shopping the thing around for over a year now. But, what is kind of interesting is seeing the guy hanging out with drummer Jimmy Chamberlin and former guitarist James Iha in a swanky Los Angeles studio.

Today, Corgan posted an image on his Instagram of the three musicians sitting around, writing: “Not sure what cross-eyed spy took this photo, but we had a visitor to the studio the other day. So many memories when you put the three of us together. @jamesihaofficial @chamberdrums #WPC.”

What does this mean? Could the three of them be working on that reunion album that Corgan teased back in 2016? What we do know is that Corgan and Chamberlin have been working on a four-and-a-half minute rocker called, “Route 666”, which sounds like a horror film you might have rented at Blockbuster in 1995.

Of course, it helps that Corgan sounds pretty chummy about the mini reunion, seeing how he posted this a few hours earlier, “Life is wonderful. Keep moving. I could complain (because there are always irritants to the rainbow in my mind) but ’tis more graceful to stay inspired. To see all as being in it’s perfect place.. #beherenow.”

Granted, this isn’t the first time Iha’s hung out with the Pumpkins in recent years. In 2016, he played a handful of shows with the band, including a hometown gig in Chicago. If things are as copacetic as they seem, it’s very likely we’ll be hearing some music from at least three original members of the band, making this the slowest reunion of all time.

Now, if they could only invite D’arcy Wretzky or Melissa Auf der Mar over.