Dream Wife share their self-titled debut and break it down Track by Track: Stream/Download 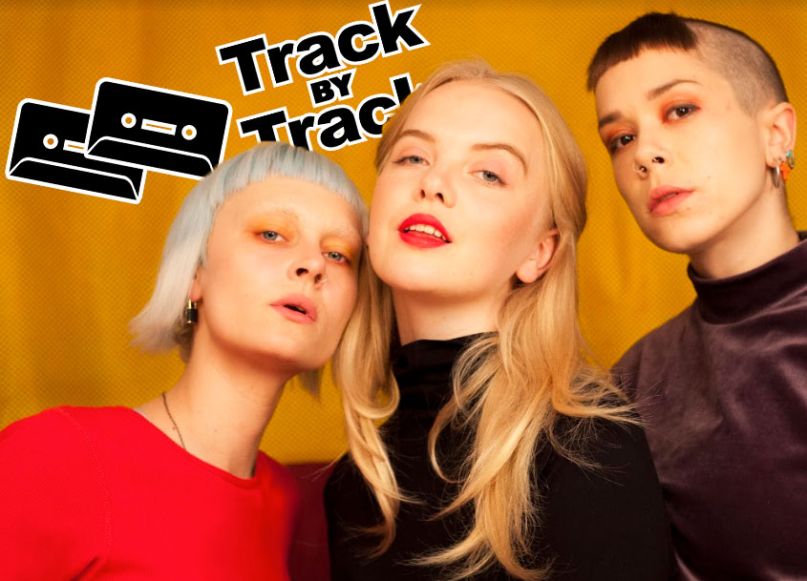 Forget what you thought it meant to be or have a dream wife. It’s 2018, and the concept is essentially dead, reborn in the punk-influenced fury of British/Icelandic trio Dream Wife. With a battery of songs catchy enough to be called poppy but full of an urgent thrashing that shreds convention, the band gleefully reclaims femininity for the beer swilling indie disco crowds. And the takeover begins with the release of their new self-titled debut.

Perhaps no track better encapsulates Dream Wife’s missions statement than “Somebody”, a defiant drudge that declares in no uncertain terms, “I am not my body/ I am somebody.” Yet the efforts 11 songs run the full gamut of emotion and desire. Opener “Let’s Make Out” is a fierce reclamation of sexual independence, while “Spend the Night” hesitantly asks for a sign of reciprocated feelings. Throughout it all, the band burns back objectification with fiery musicianship that is as much riot grrrl as it is ’70s-honoring indie rock.

Check it all out by streaming and/or purchasing Dream Wife below.

For more insight into the album, Dream Wife have taken the time to break it down Track by Track. Read on to learn more.

“Let’s Make Out”:
“Lets Make Out” is a raucous party track, an invitation to a wild, good time and conveniently the opener to our DEBUT ALBUM! It’s a forceful yet fun reclamation of female sexuality. The energy is to grab whatever cute person you’ve got your eye on and (with consent ofc) take life by the horns.

“Somebody”:
“Somebody” explores the idea of female sexuality a step further and places it implicitly with the individual. Existence in a female body is not consent; makeup is not consent; clothing is not consent; making out with someone is not (necessarily) consent. “Somebody” is a response to the outpouring of pain, strength and solidarity during The Slut Walk in Reykjavik summer before last, the need for this dialogue globally was enforced during the resurfacing of the #metoo campaign last October. “Somebody” is a call for solidarity and for changes in the fabric of our society.

“Fire”:
We often refer to ourselves as a fire trio; in reference to the energy we feel as a unit and our to astrological sun symbols (Sagittarius, Sagittarius, Leo). Fire explores that energy between people. It’s the spark, that’s very real but you can’t see or touch, but you can feel; electric and explosive in turn.

“Hey! Heartbreaker”:
“Hey! Heartbreaker” is a song truly written on the road, in front of a live audience, ever growing and ever changing. It first came to fruition during that fabled Canada Tour that you’ll often hear us mention. But now this song gets to live out it’s destiny in this full on fantasy recording; pumped up, wild and we don’t know about you but we just can’t sit still.

“Kids”:
“Kids” is the sister song to “Love Without Reason”. It’s nostalgic, bittersweet and there’s always this moment on stage where we look around and grin because really, “we don’t wanna be anywhere else.” It’s a song from those days when it’s always sunny, and you can waste time together blissfully, because time is endless.

“Taste”:
After an insightful comment from a lover we almost called this song “Blow Job”; make of that what you will.

“Act My Age”:
“Act My Age” contains both our most sweet pop side with our most wild rocking side; perhaps present in these dual forces lays a fundamental truth about our current ethos; to exist in both extremes and to give the word an example of women existing in both extremes (and plenty of places in-between too).

“Right Now”:
“Right Now” encapsulates those times when we’ve been working hard and playing harder. Those times when you haven’t been home in weeks, and you are running on pure adrenaline, and you feel kind of wild, and don’t know how you’re still going but, hey, here you are, and it feels kind of good, but all you want is to be with really good friend, the kind of friend you can call at 1am and say, “can we get a pizza?” You know, those kinds of times.

“Spend the Night”:
Drawing to the end of the album is “Spend The Night”. “Spend The Night” is the sweetness in the knowledge of knowing time together is brief. It’s compassionate, strong and vulnerable. As a band you pass through cities and places so often and frequently and have this kind moment with so many people; “Spend The Night” is a love letter to every person in every city that we’ve touched, or that touched us.

“F.U.U.” (feat. Fever Dream)
There was a time when we thought we’d keep “F.U.U.” as an unlisted secret track to really mess with people’s eardrums, but when a secrets this good, why keep it? The big secret is that really it’s tune about a haircut, but at the same time “F.U.U.” is an unapologetic, no-fucks given assault on whatever’s making you MAD; be that your creepy driving instructor that keeps slapping your thigh, that dude telling you that you “better practice you’re guitar because looks fade,” or the friend that offers some condescending, slut shaming insight in the wake of sexual assault. And with our pal and all round Baddest Bitch Fever Dream spitting bars it’s a track that doesn’t quit. C’mon, scream “BITCHES” with us. It. Feels. So. Good.