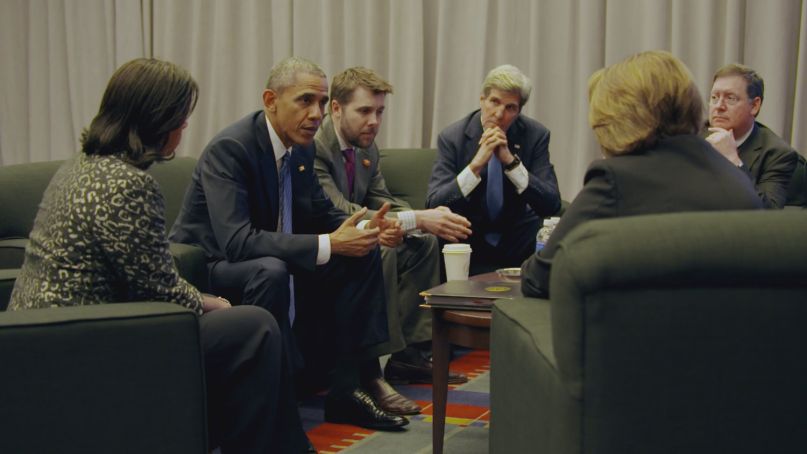 America is roughly one year into the Trump administration, and so far, it’s been an exhausting litany of petty political spats and divisive rhetoric that makes it hard to feel proud to be a citizen of this country. One could hardly be blamed for waxing nostalgic about the “good old days” of the Obama administration, flawed as they were; while many mistakes were made, and criticism of the last presidency is entirely valid, it’s hard to argue with their comparative upholding of democratic norms and values, and the wide-eyed idealism the president hoped to instill in the American people. In The Final Year, documentary filmmaker Greg Barker offers an intimate, if slightly hagiographic, look at Obama’s last year in office – one which starts in triumph, but which hindsight turns into a grand tragedy.

Taking a fly-on-the-wall approach similar to D.A. Pennebaker and Chris Hegedus’ seminal political doc The War Room, The Final Year focuses on several key individuals in Obama’s inner circle – Secretary of State John Kerry, UN Ambassador Samantha Power, advisor/speechwriter Ben Rhodes, and national security advisor Susan Rice – as well as Obama himself, as they scramble to secure his legacy in the last 365 days of his presidency. Given the events they face in that year (the crisis in Syria, the Iran nuclear deal, the Paris Climate Accord, the looming threat of Donald Trump’s candidacy), they have a lot of hard work cut out for them.

Through footage of meetings, interviews, talking heads, and media coverage, Barker presents these individuals as hard-working, dedicated officials trying to make the best of complex political situations. Rhodes, Kerry and Power are shown, by all accounts, to be eloquent, driven and deeply intelligent people who believe in the principles of responsible, cautious leadership. They’re considerate, thoughtful, and passionate about making the world a better place, whether it’s Kerry with climate change and finding peaceful solutions to conflict or Rhodes making steps to reestablish diplomatic relations with Cuba. However, Power is the real avatar for this kind of activism, urging UN ambassadors to look at VR livestreams of Syrian refugee camps and listening intently to African activists urging the White House to act on Boko Haram.

While The Final Year is sunny and idealistic, it also feels more than a little insular and cliquish. From its inception, it was clearly intended as a puff piece for Obama’s legacy, before the results in November pulled the proverbial rug out from under them. For much of its runtime, The Final Year acts as a Greatest Hits album for Obama’s tenure, emphasizing his highs (his speeches at Hiroshima and the UN) while minimizing their lows (the collapse of the Syrian cease-fire, Rhodes’ Times expose criticizing the press). Little oxygen is given to right-wing criticism of the Obama administration, those threats mostly coming from a critical press in the form of ominous headlines and disembodied soundbites from Fox News. The Final Year may feel like a fly-on-the-wall production, but there’s an element of careful curation in the personalities and events shown that undercuts some of their earnestness.

Adding to the doc’s confusion is the sudden, begrudging need – like most progressives in 2016 – to take Trump and his candidacy seriously. First only seen on a TV in the background, with Rhodes hubristically brushing off any chance he’d win, the threat of Trump looms ever closer as the months pass. Before they know it, Election Night crashes down on them like a bucket of ice water, and suddenly Rhodes, the man crafting so many of Obama’s inspirational words, is speechless. Hope turns to despair for the doc and its subjects, as a blindsided White House staff must suddenly deal with a sobering end to a presidency filled with so much potential. It’s a disturbing, disheartening case of real life ruining the trajectory of a film – something for which the filmmakers can hardly be blamed, but which colors its effect nonetheless. As the Trump administration exhibits a pathological need to undo every initiative, good or bad, Obama ever touched, the events and accomplishments shown in the film have a sobering air of ephemerality to them. Nothing gold can stay, it seems.

The Final Year serves best as a rosy-cheeked reminder of the hope and optimism that existed for eight years in the White House, a brief glimpse at the kind of people who Americans should have looking after their interests. Power, Rhodes, Kerry, and the man they follow are deeply flawed but well-intentioned, smart cookies with a respect for the rule of law and the small, incremental ways they can help make the world a better place. Despite all its apologia and careful polishing of the Obama brand, there’s a core of basic human decency there that can’t be faked. It’s hard to imagine the same kind of doc being made about a year in the Trump White House; instead of earnest talk about finding the best ways out of conflict, it would just turn out like a particularly disgusting episode of Celebrity Apprentice.