Film Review: The Polka King Is a Wildly Uneven Take on a Wild True-Life Story 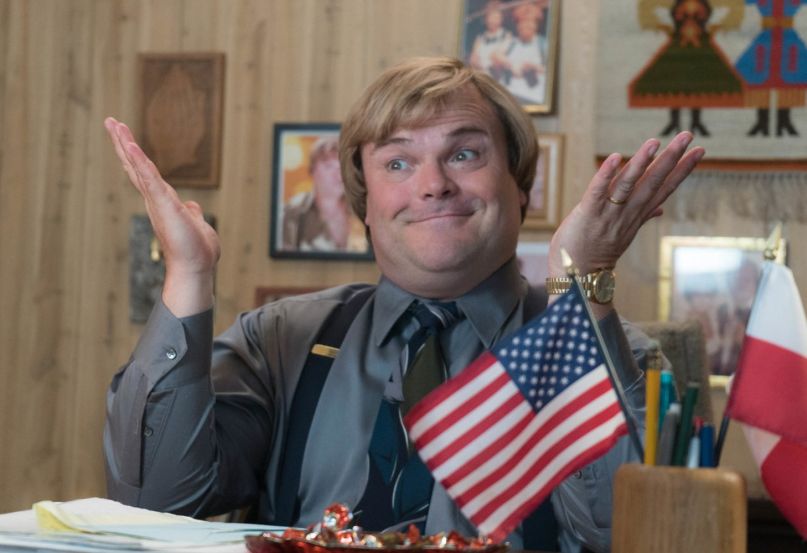 Charisma is a force. It’s not enough (most of the time) to make someone a star, or to make a performance eminently watchable, but it sure helps. And when it’s found in the wild, charisma can make a lot of questionable things seem appealing. If someone has that elusive “it,” they can be a force to be reckoned with, even if sometimes that force isn’t for good.

Jack Black has “it.” So, it seems, did Jan Lewan, the Polka King at the center of The Polka King. As directed by Maya Forbes and Wallace Wolodarsky from their own screenplay, the film tracks the rise and inevitable fall of Lewan, a Polish immigrant who earned a 1995 Grammy nomination, some six years before he wound up in prison. His journey to both was first traced in the documentary The Man Who Would Be Polka King, on which the film was based; the latter film is the kind of movie in which the “based on actual events” line is not only welcome, but necessary. Otherwise there’s no way this thing would seem plausible.

As played with his familiar, wild-eyed enthusiasm, Black’s Lewan might not have “it,” but he does have something. To the elderly Pennsylvanians who delight in his performances, he’s a bit of a rock star, and one they can actually talk to. To his wife Marla (Jenny Slate), he’s almost godlike, a man who takes time off from making their dreams come true to cook up a beautiful breakfast for her mother (Jacki Weaver) and son (Robert Capron). To his friend Mickey (Jason Schwartzman), he’s the kind of man who could turn a failing polka orchestra into an empire and transform a meek clarinetist into Mickey Pizzazz, of the magic fingers. And to people in 22 states, he’s a sure thing: a man who’s going to make them rich.

What Lewan is to The Polka King, however, is murky. When asked how his name is pronounced, the fictional Lewan dismisses the issue, saying it’s whatever people want it to be: Jan, like Brady; Jon, like Spencer; Yon, like Yon Yonson, who lives in Wisconsin. That’s a fitting attitude, given the movie which surrounds him. There are two certainties here. The first: Forbes and Wolodarsky are fascinated by Lewan and those in his orbit, and interested in all his various complexities and contradictions. Second: they consider him at least somewhat worthy of sympathy. That’s it. That’s all that can be said. If this gives you hope that The Polka King is some delicious puzzlebox, a masterwork of ambiguity, please ignore that impulse. It’s not that the film doesn’t have an opinion on Lewan, it’s that the opinion seems to change every few scenes.

The most distressing of these is whether or not their subject is a joke. Sometimes, Forbes and Wolodarsky clearly think so, and it’s not a good look. Particularly troublesome is a montage in the film’s back half, in which Lewan croons a polka love ballad in front of a series of tacky generated backgrounds — red roses in full bloom, that sort of thing — while Slate’s Marla prepares for the Mrs. Pennsylvania pageant. Black plays it more or less straight, but the sequence doesn’t have a thing to do with love. It’s just a series of jabs. Polka — ha! The ‘80s — ha! Aerobics — ha! These people — ha! How ridiculous they are, the film seems to say, before asking you to hold that thought and go back to investing in them as human beings.

What’s worse is that the sequence described above is one of only a few with any real visual flair. The directorial duo and cinematographer Andrei Bowden Schwartz shoot everything competently enough, but few images stick: Lewan waves a red handkerchief on stage, his shirt sparkling in the spotlight; raspberries nestle perfectly in the little nook at the center of a full breakfast plate; Schwartzman’s Mickey sweats through a suit at the Vatican (this is a strange movie). For the most part, however, not even the filmmaking wants to clarify what kind of story is being told. In these brief aforementioned moments, you start to get a sense of some kind of tone. There’s a sense of heightened unreality, perhaps a precursor to the moment in which Lewan’s fragile scheme finally cracks wide open. But they are few, and fleeting, and in between we’re mostly treated to close-ups (or close cowboy shots, as Lewan describes them to a cameraman) of Black’s face, as though his eyes alone are enough to tell the audience what, exactly, they’re supposed to take from this uneven mess.

To be fair, it’s sometimes almost enough. If there’s one more certainty in this film, it’s that Jack Black has no interest in belittling this character. Nor does he play him as a wholly sympathetic figure. In his hands, you can see Lewan’s every calculation. There’s a visible price paid in every moment Lewan chooses to deceive and damage those who’ve placed their trust and their money with him, and that moment of self-awareness and self-hatred is almost always followed by a palpable sense of relief. What he’s doing is incredibly selfish, and he chooses to ignore the looming consequences, but Black never lets us forget that this kind of denial requires active maintenance, and it takes a toll. The single most effective moment of the entire film arrives when he’s inevitably caught, and that wall finally comes down. A moment before, Lewan was grieving, and it rang only somewhat true. But when it’s finally time to pay the piper (in the form of J.B. Smoove, no less), Black’s hitting nothing but home runs.

It’s a moment, and a performance, in search of a better movie. Let’s not say that The Polka King isn’t worth your time. It’s competently made, and as stated above, it’s the sort of story too outlandish to be fictional, and those are the based-on-a-true stories worth hearing. But as you’re watching, don’t let the word ‘true’ out of your head. Jan Lewan is a real person, and his victims were real, too. To ask us to sympathize with and then mock him is confusing at best; to ask us to sympathize and then belittle those he duped is worse. To do both in a movie that’s rarely more than just ‘fine’ is just adding insult to injury, and that’s something that no amount of charisma can conceal.