Okay, we’ve said our piece. We’ll see ya in the pit.

by Ryan Bray and Collin Brennan 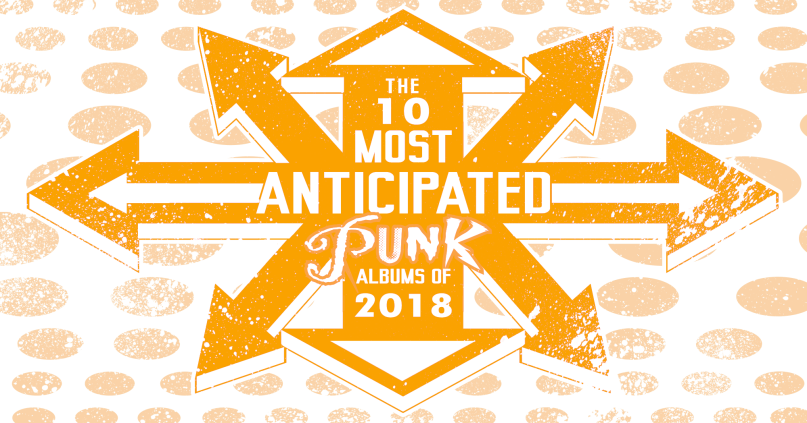 The new year has only just begun, but 2018 already promises to be a year replete with great punk and hardcore offerings. There are hotly anticipated records from young up-and-comers and equally exciting releases from time-tested veterans. There are reunion records from some of our personal favorites and others that cathartically speak to today’s crazed sociopolitical landscape.

In true punk rock fashion, this year’s crop of releases comes in many different shapes, sizes, and sounds, and the versatility is promising to say the least. Senior writers Collin Brennan and Ryan Bray sorted through this year’s upcoming punk releases and cherry-picked a small handful that fans should keep their ears open for. Okay, we’ve said our piece. We’ll see ya in the pit.

Ought – Room Inside the World

How does a band follow up on breakthrough critical success? There’s never an easy answer, but Ought has so far done a credible job of keeping their steadily growing momentum going. The band turned some serious heads with their first two records; 2014’s More Than Any Other Day and 2015’s Sun’s Coming Down. The buzz was enough to attract the attention of Merge Records, who will release the Montreal art punks’ third effort in February. For Room Inside the World, the band enlisted the services of producer Nicolas Vernhes, whose past credits include work with other experimental-minded acts like Animal Collective and the Dirty Projectors. So far, the collaboration seems to have coaxed some new sounds out of the foursome. “These Three Things”, the record’s first single, still finds Ought indulging their artier instincts, but it sounds more in line with New Order than the Television and Pavement influences of the band’s past records. –Ryan Bray

Superchunk – What a Time to Be Alive

It doesn’t take a truffle pig to sniff out the irony in the title to Superchunk’s forthcoming 11th studio album, What a Time to Be Alive. But just in case you couldn’t read between the lines, the North Carolina rockers went ahead and shared the bitingly sarcastic title track, a pop punk stomper that features what might as well be the defining sentiment of the Trump era: “The scum, the shame, the fucking lies/ Oh, what a time to be alive.” Superchunk already proved they’re back on their game with 2010’s Majesty Shredding and 2013’s I Hate Music, but it will be interesting to see if they can stay vital while indulging in some righteous political cynicism. –Collin Brennan

Since forming in 2008, The Men have crafted one of the most exciting and unpredictable bodies of work in the American punk and hardcore underground. The band navigated its way from the pulverizing noise of its earliest records to a sound more informed by country and straight-forward rock and roll, only to shift back to its ferocious roots on 2016’s Devil’s Music. That Drift, the Brooklyn act’s latest effort due out March 2nd, again marks a sonic shift is at this point to be expected, but it’s always hard to anticipate where exactly they might land next. Based on the record’s first single, “Maybe I’m Crazy”, The Men are ready to try their hand at their own warped interpretation of industrial and new wave. The song sounds like a new sonic fit for the band while still indebted to its noisy, experimental roots. –Ryan Bray

It’s almost a farce to call Titus Andronicus a punk band in the wake of 2015’s The Most Lamentable Tragedy, a 93-minute rock opera with quasi-literary ambitions and a tendency to gobble up genres indiscriminately. That album was rumored to be the group’s last, and it certainly sounded as if singer-songwriter Patrick Stickles was leading the charge of his Light Brigade with no thought toward the future. But it turns out that Stickles and co. have at least one more cough in them before the final bang, and if new single “Number One (In New York)” is any indication, it will be a slower, quieter gasp for air this time around. We keep waiting on Stickles to quit trying to top himself, but “Number One” might be the band’s most sprawling track yet — an eight-minute slow build that arrives at chaos without the crutch of thrashing guitars. –Collin Brennan

Acid Dad’s origin story stretches all the way back to 2014, when the Brooklyn psych-punks pooled their super powers at a drag show and a star was born. They’ve pulled much of the New York punk scene into their orbit since then (and left more than a few venues trashed in their wake), but they’ve only just got around to recording a proper debut album. The full-length format would seem to lend itself to the dynamic melodies that bubble underneath the fury of their live set, and it should give even more room for the occasional bluesy guitar riff and psychedelic freak-out. –Collin Brennan

In 2018, War on Women embodies something much greater and culturally pertinent than just music itself. The Baltimore-based co-ed punks’ yet-to-be-titled sophomore record is set to arrive in the thick of the still-growing Me Too movement, giving something tangible for the band’s powerful feminist rallying cries to bump up against. The cultural backdrop is such that even Newsweek, an outlet that normally wouldn’t bother with wading too far into punk and hardcore waters, has taken notice of the band’s ferocious-but-intelligent brand of hardcore. Powered by a sound the band self-describes as early Metallica crossed with Bikini Kill and frontwoman Shawna Potter’s passionate speak-sing vocals, War on Women feel like a band, maybe the band, that the world needs today. –Ryan Bray

Brooklyn power-punk trio Thick may release a full-length album in 2018, or they may just keep pumping out a steady stream of singles and EPs along the lines of 2016’s It’s Always Something…. We’d honestly be happy with either outcome, so long as we get a few more swigs of a strange brew that blends late-’90s pop punk with sloppy garage riffs and a dash of millennial ennui. The group’s lyrics often read like an exhausted account of life as a young person in New York City (“I got that apartment in Bushwick/ And now I’m bored”), but they take on new meaning when plastered against a wall of sound and sung in harmony. We’re in this together becomes the dominant sentiment, each song tugging at your shirt with a reminder that there’s always someone to bang heads and drink beers with in a world gone absolutely fucking mad. –Collin Brennan

With their last record, 2004’s Audit in Progress, Hot Snakes left an almost impossibly high bar for themselves to clear should they try for a follow-up. The garage punk outfit broke up in 2005, leaving that much in doubt for many years. But now five years into their second act, the band is primed for a return to the primitive punk rock trenches. The band’s signed over the new record to Sub Pop, but beyond that there’s not much else yet in the way of details (a title and release date have yet to be announced). But based off a handful of new tunes unveiled during the group’s ferocious run of East Coast club dates in November, it’s clear that the Snakes’ savage instincts have only sharpened over time. –Ryan Bray

The world could sure use some more posi-punk in 2018, and all signs point to Olympia’s RVIVR delivering the goods with another collection of fist-pumping anthems that celebrate life’s rougher edges. Singer-songwriter Mattie Joe Canino may be better known for their work in Long Island punk band Latterman, but their partnership with Erica Freas tends to produce an even more potent blend of cleansing and catharsis. We got a whole lot of that on 2013’s The Beautify Between (and a little more on last year’s single “The Tide”), but we’re overdue for another blast of unrelenting positivity. –Collin Brennan

You can’t believe everything you see and hear on the internet and social media, but sometimes the news is too tempting to ignore. If we’re to believe the teaser video posted to The Distillers’ newly activated Twitter account earlier this month, Brody Dalle and crew are ready to return with their first release since 2003’s Coral Fang. Beyond marking the second coming of one of the most sorely missed acts of ’00s punk wave, the timing couldn’t be any better for a Distillers return on a more societal and political front. With bands like Thick, Downtown Boys, Bully, Screaming Females, and others shedding more light on women making tuneful, hair-raising noise, it only makes sense for a generational torchbearer like Dalle to rejoin the party. Details on a new record have yet to surface, but the band is slated to return to the stage at this year’s Shaky Knees Festival in Atlanta in May. –Ryan Bray