Film Review: Red Sparrow Struggles to Find the Pulse Beneath Its Spy Games 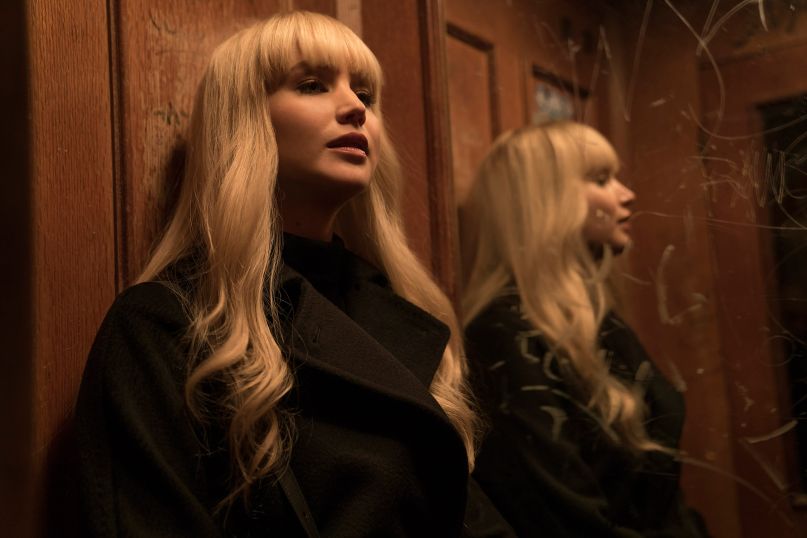 It’s an easy joke to make: “Oh, I’m going to see Red Sparrow, which is definitely not a Black Widow movie, not at all, no sir, Red Sparrow isn’t anything like Black Widow.” But there’s an unexpected punchline headed your way. Turns out, Red Sparrow actually isn’t anything like the Black Widow film we might someday see. She’s not a superhero. She’s not even really a spy — at least, not an experienced one. Instead, this Jennifer Lawrence-fronted thriller is about a woman brutalized, physically and emotionally, who finds ways to be brutal in return.

Francis Lawrence’s Red Sparrow isn’t shy about that brutality, but it doesn’t have much of an opinion about it either, aside from a few certainties. Rape and rapists are bad. People who break the legs of ballerinas are bad. Strong women are good, unless they are bad. What’s missing is any sense of interiority, of the costs of violence or resistance, of committing or being subject to brutality. That’s because whatever Red Sparrow is, it’s also a movie about a spy, so it’s a movie in which much goes unsaid. But there’s a fine line between a story that leaves things unsaid and a story with nothing much to say.

Dominika Egorova’s (Lawrence) life is a focused one: she cares for her seriously ill mother (Joely Richardson), and she dances. As a prima ballerina, her home and her mother’s healthcare are provided by the ballet, but when she suffers a career-ending injury, she’s left with few options. Enter her uncle (Matthias Schoenaerts), a high-ranking member of a particularly shadowy corner of the Russian government, who enlists her help in one operation with the promise that it will change her life. It does, and several gruesome spurts of blood later, she’s given a choice: “die, or become a sparrow.” She chooses the latter, training to become an agent of deception and manipulation, whose first task is to compromise an American agent (Joel Edgerton) who’s working with a mole inside the Russian government. As she targets him, she also becomes enamored with him — or does she?

It’s a more interesting film when that ambiguity remains purposeful, though the source material (by former CIA Officer Jason Matthews) suggests otherwise. The problem is that much of what goes unsaid still needs to be communicated in some way, and while Lawrence is a performer of great charisma, she’s ill-cast for what Red Sparrow demands. It’s no coincidence that the film’s most electric scenes, save for a twist or two, are those in which Dominika doesn’t withhold. When Lawrence plays to the cheap seats, the film comes to life. When she’s the blank slate expected of a spy thriller, it falters, because it doesn’t play as though she’s concealing or deceiving. It plays as though she’s empty.

But on the subject of the film’s best and most thrilling scenes: there’s one that isn’t focused on Lawrence letting loose or a twist unspooling, and it’s the exception that proves the rule. When Stephanie Boucher enters the film, the chief of staff for a powerful American senator, her motivations seem cloudy. (In a film like this one, the motivations almost always are). But in the hands of Mary-Louise Parker, who gives the film’s most interesting performance in a spare handful of minutes, it becomes clear that complexity of motivation isn’t all that important.

There are probably an incalculable number of things that pushed Boucher to this point, but in the end, she’s there for the money. What makes it such a gripping performance is how perfectly Parker threads the needle, and how nimbly she sets us up for what’s to come. Present is all the interiority that Lawrence’s performance lacks, the sense that she’s not telling us about some deeper hurt or anger that’s led to her where she is. And yet, also present is a cocktail of vulnerabilities that spell certain doom from the moment we hear her speak. That she’s a world-class film drunk is but one ingredient; more important are the hints of ego, irritation, self-hatred, and recklessness which build to her inevitable crash.

Dominika rarely nears such heights, but the blame can’t be placed solely at the actor’s feet. Director Francis Lawrence clearly reveres his star, but his desire to give her so many moments of silence and restraint is actually a hindrance. Jennifer Lawrence in a moment of big, unfiltered emotion compels; Jennifer Lawrence wearing a mask simply doesn’t. The same can be said of Edgerton, who also suffers from a lack of character development, and the flatness of their relationship can’t truly be pinned to an absence of chemistry, since there’s not much there to combust in the first place.

It’s in scenes like Parker’s, or those of Charlotte Rampling, Ciarán Hinds, Bill Camp, and others, that the film finds its pulse. Red Sparrow put all its chips on the idea that audiences would find Dominika a compelling and mysterious figure — Lisbeth Salander in ballet attire. In doing so, it sacrifices color, personality, and substance, leaving behind a vast expanse of gray restraint only leavened by the occasional pop of the supporting cast’s merciful, wonderful personalities. But then they vanish, and we’re back to the still waters brought to us by the partnership of Lawrence and Lawrence. Forgive the obvious allusion, but those two ask for no such pardon, so here goes: still waters do not necessarily run deep.