Groundhog Day at 25: Bill Murray Finds Freedom While Trapped in a Nightmare

An acerbic weatherman finds serenity, growth, and joy as he strives to be a better person 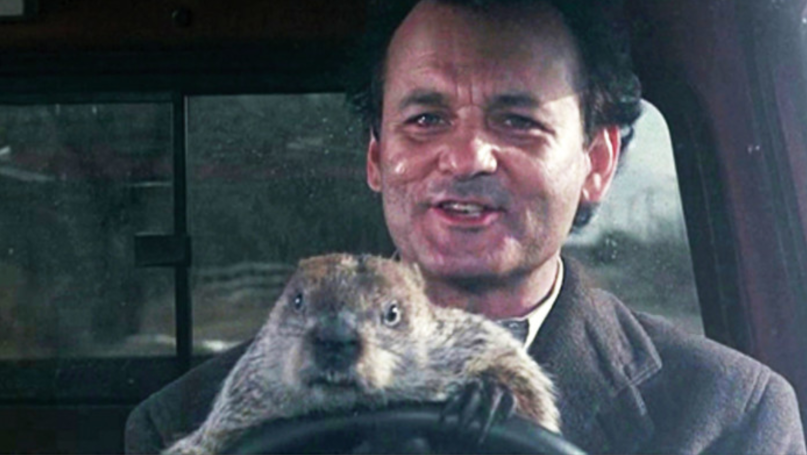 It’s easy to think of science fiction and fantasy films in terms of their trappings, whether that be spaceships and lasers or swords and sorcery. But at their best, works in that genre aren’t about light speed or magic powers; they’re about thought experiments made whole, meant to probe the real world through a fictional one and to examine the human condition by stripping away the bounds of the impossible and seeing how much humanity is left.

That’s a lofty way to introduce an uproariously funny, Bill Murray-fronted comedy. But seen from that vantage point, Groundhog Day may be the sci-fi/fantasy film of the decade (with all due respect to The Matrix), despite its small-town setting and distinct lack of spells or space flights, because it uses its fantastical conceit to reveal what could, and what does, make us good.

The film’s premise is deceptively simple. With no warning or explanation, a boorish and egotistical weatherman, Phil Connors, is forced to relive the same day over and over again. But from that simplicity comes one of cinema’s most incisive looks at why we should choose to do good things and why we should seek to be better people, even when there’s no promise of reward or change. Twenty-five years later, Groundhog Day is still as salient and relevant as it was when it first hit the big screen in 1993.

The hidden strength of the film is that it takes its loopy premise seriously. Make no mistake, Bill Murray is arguably at his comedic peak here, blending the obsequious jerk persona from his turn in Scrooged with the same sly, acerbic wit that had become his calling card, even as his character softens over the course of this film. Groundhog Day also wrings the comedy from a city slicker like Phil Connors having to deal with the vicissitudes of small-town life and even uses the movie’s repetitious setup to indulge in a little slapstick and employ the kind of gags that rely on theme and variation and experts in the editing bay.

But the script, penned by writer-director Harold Ramis and co-writer Danny Rubin, has the good sense not to turn Groundhog day into an airy romp. The film never loses its sense of fun or its sideways glance at the bizarre situation it presents, but it still commits to considering how someone, even someone as self-important as Phil Connors, would react to being stuck in this Sisyphean nightmare.

The result is that Phil goes through several different stages in response to the time loop, working his way through the sort of phases it feels like anyone might experience if they found themselves stuck in such an insane situation. For Phil, it starts with disbelief, questioning, and testing. He thinks he might be going mad, hallucinating, or dreaming until he breaks enough pencils and predicts enough future events to convince himself that no, this is really happening.

Phil then devolves into hedonism, realizing that if the timeline resets each day, then none of his bad choices will lead to any comeuppance. He eats like a glutton; he gets into car chases with the local police; and he uses his cheap tricks to seduce women in the town, all with the knowledge that he’ll never have to pay the tab the next morning.

But eventually, getting everything he wants becomes dull and unsatisfying, so Phil turns to greater challenges. The one he settles on (implied to require dozens and dozens of tries) is to woo his co-worker, Rita (Andie MacDowell). Rita is a challenge because, when pressed, she declares that she wants a man who’s unfailingly kind, courageous, and good — basically everything that Phil isn’t.

Phil doesn’t so much try to actually be that man as he does to project the image of him. He learns French (or at least enough French) to impress her, orders her favorite dishes and treats, and says all the things he knows she wants to hear. And it works, but only up to a point.

When it comes to trying to forge a real connection, time and again Rita sees through him. Love, Phil discovers, is more than just a series of inputs and outputs, a test whose answers you can memorize and ace. It’s something deeper that cannot be faked, at least not without an increasingly strained and unhappy ending each time.

It’s then that Phil begins to feel the hollowness of his existence, growing depressed and despondent. He starts to feel trapped, rather than liberated, by his situation, and endeavors to escape by any means necessary. The movie goofs on that idea a bit, turning his suicide attempts into Wile E. Coyote-esque shenanigans, but Groundhog Day also takes time to let the reality of the situation — the ways in which this is not just a carnival ride, but instead Phil’s new, endless normal — wash over him.

Eventually, Phil becomes resigned to his fate. He knows that everything he experiences is fleeting, so he begins to savor what he can, while he can, without any expectation or hope for anything different. And a strange thing happens in the process — Phil stops wanting anything.

He stops looking for any gain. He stops thinking there’s a way out of this. He spends time with Rita not as part of some scheme to bed her or win her trust, but because he simply enjoys spending that time with her. He no longer believes there’s an exit, and so he stops trying to find one.

Forced into a world and an existence that are immutable, Phil focuses on the one thing he can change — himself. He becomes a better man, not because he has anything to gain from it, because he thinks it will win Rita’s heart, or because he expects to receive some reward (moral, literal, or otherwise). Instead, he becomes good for the sake of good itself. His good works will be wiped away, like a Buddhist sand painting, on a daily basis, and still he does them each day anyway.

That’s the central irony at the core of Groundhog Day. It’s only when Phil stops trying to escape his circumstances that he earns his freedom. It’s only when he stops straining to woo Rita that he wins her heart. And it’s only when he realizes that his actions have no lasting consequences, that he cannot change things for better or worse, that he chooses to do good and to be good. It’s as earned a transformation as you’re likely to find in cinema.

There’s an amusing stereotype of existentialism, in the form of the bleak, beret-ridden gloom merchant, taking drags off his cigarette and grousing about the banality of all creation. But the heart of that school of philosophical thought is that in a world full of absurdity, one without any inherent meaning, we have an incredible freedom to find and become our most authentic selves and to make our own meaning in whatever tiny spaces we find in which to craft it.

The space that Phil Connor finds is very small indeed. He has only 24 hours, a town of three and a half square miles, and his own desperate mind in which to cobble together some sense of purpose, some reason to be, in that brief stretch before the tide comes in once more to wash it all away.

And yet he finds it. His salvation lies in his own capacity to be his best self, to improve, to learn to cherish goodness for goodness’ sake even as the slate is wiped clean. He’s overjoyed when February 3rd finally comes, but until that blessed turn of the calendar happens, he nevertheless manages to find peace.

Even before he escapes the time loop, even before he earns Rita’s love, even when he has no hope of anything but the tinny tones of A.M. radio to wake him every morning from now to forever, Phil learns to cherish his daily struggle. He learns to perform acts of kindness, knowing they’re destined to be undone. He learns to make his own meaning from the feeble tools at his disposal. And in that, he finds serenity, growth, and joy. Even before he looks upon a new day after so long in the wilderness, one must imagine Phil Connors happy.